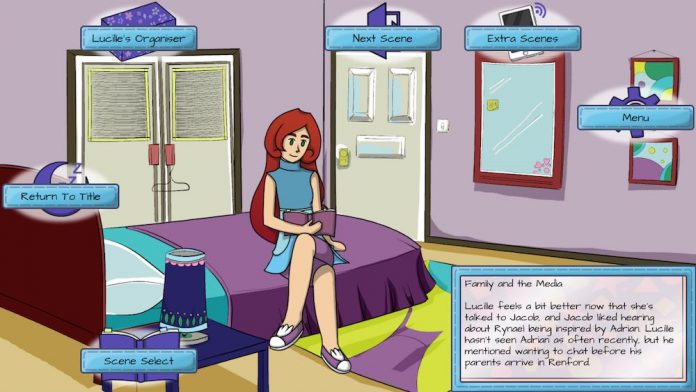 This morning, I previewed a quaint little game called Dialogue: A Writer’s Story.

I hadn’t heard of it before, but after reading its synopsis, I was instantly intrigued. It tells the story of Lucille, an author who is busy writing a fantasy novel. The game is about her thought process as she develops her novel and about her interactions with her new neighbour, Adrian, and how this inspires her novel to develop.

Dialogue, as its name suggests, is completely centred around conversations. All fully voiced, conversations take place between Lucille and her neighbour – or with the fictitious characters of her novel – as you make choices which may or may not affect the outcome of the game. Each conversation takes on a different form and uses different mechanics; one may be animated with the characters’ avatars in a simple yet eye-catching 2D cartoon style, while the next may draw out on your screen like dialogue in a film script. It’s a very inventive use of text-based gameplay and certainly helps keep you interested as the game drifts between different conversations.

It’s a pretty heavy experience for something that seems quite accessible on the outside. Despite its bright and simple veneer, Dialogue is actually quite a complex game. There’s a lot of detailed scientific talk – Lucille’s neighbour, Adrian, is a scientist, and science plays a heavy influence in Lucille’s novel – and so it all went a bit over my head at times. Where the game shines though, is in its representation of what it takes to write a novel. Lucille’s thought processes, internal monologues and the way she draws inspiration from the people around her will all be familiar to anyone who’s ever attempted to write fiction, and it’s enlightening – and uplifting – to know that you’re not alone with the quirky ways of working that you have.

For any novelist or budding author, Dialogue is a title worth taking a look at. For more information, check out the game’s official website.