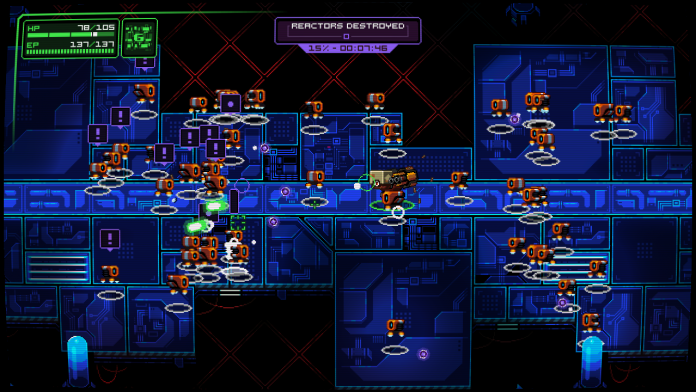 Neurovoider‘s murderous robots will keep you on your titanium toes in this twin stick shooter.

As anyone who’s played No Man’s Sky can attest, adding procedural generation to your game doesn’t mean it’s going to be any good. Randomly generated or not, if the game is as dull as ditchwater, players won’t be coming back. Fortunately, this issue doesn’t affect Neurovoider, a twin-stick shooter from Flying Oak games. The game, which sees you playing as a disembodied brain crammed into a robot suit,  is anything but dull.

The moment you load up Neurovoider, it begins its assault on your senses. The game makes reference to it being a “rogue lite”, but there’s not an elf, kobold, or slimy dungeon wall to be seen. Instead, you’re launched into a series of neon-bathed levels to wage war against hordes of killer robots, accompanied by a superb synthwave soundtrack. The addition of a CRT scanline effect helps convey the sensation that you’re standing in some smoky arcade complex, waggling the joystick and slamming the buttons with such enthusiasm that the owner starts giving you dirty looks.

Neurovoider first tasks you with choosing your robotic avatar, available in three models – Dash, Rampage or Fortress. As the names suggest, the former is a speed-focused character, the latter a bullet-soaking powerhouse, with the other being somewhere in between. Though, unless you select Neurovoider‘s highest difficulty level, the game’s opening level is fairly forgiving so your choice of build isn’t initially that significant.

Shortly afterwards, you’re pitched into battle against your robotic foes who range in size from large tank-sized robots through to smaller mechanoids who, due to their size and speed, are just as much of as a threat as their larger brethren. To complete each level you have to destroy one or more reactors, all the while fending off the assault from the area’s robotic inhabitants. 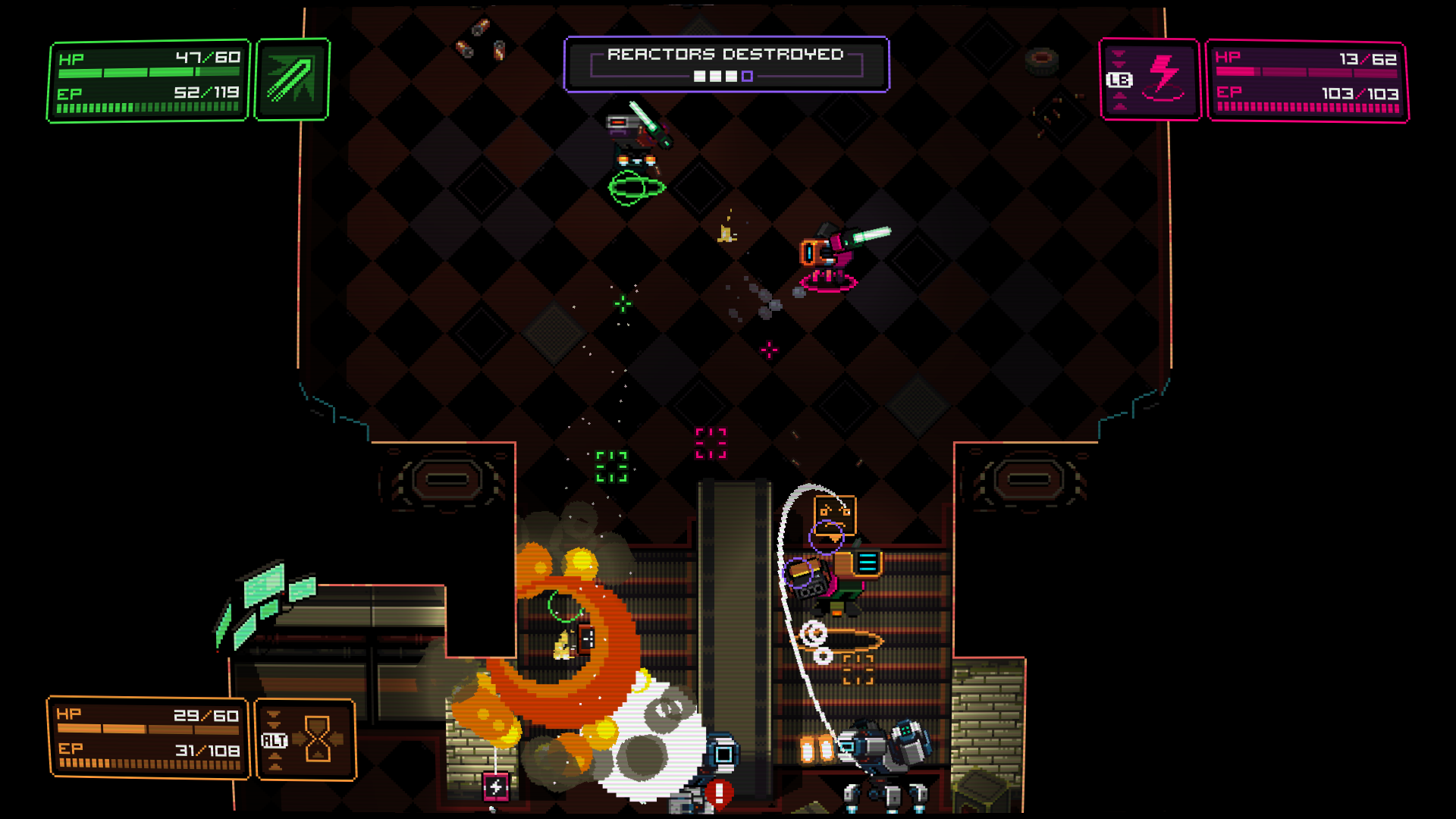 Your enemies don’t immediately swarm you and instead wait for you to come to them – though once they’ve got you in their sights, there’s no stopping them. Boss battles aside, Neurovoider never quite gets into “bullet hell” territory, but it comes close at times. You end up playing a game of cat and mouse, heading into their midst then backing off and blasting them as they pursue you.  Watching them roll into your line of fire, exploding into semi-pixelated pieces is a real blast; even more so as you work your way through the game and find the odds increasingly stacked against you.

While Neurovoider sports an eighties arcade veneer, it’s a great deal more intelligent than the likes of arcade classic Robotron, where fast reflexes and/or pockets laden down with change would guarantee you victory. It’s this added depth that, coupled with the aforementioned arcade mayhem, makes Neurovoider so compelling. Various aspects of the game can be tailored to your tastes, from the levels you choose to tackle through to the mechanical make-up of your robotic protagonist.

If you’re sufficiently skilled it might be possible to fight your way through the game’s twenty levels using just your starting build. However, permadeath is a permanent fixture in this game meaning that when you die, it’s back to the start of the twenty-level chain. A wiser course of action is to employ the upgrades your fallen foes leave behind, changing not only your robot’s abilities but their physical appearance. Playing with the various robotic configuration options is oddly therapeutic and it does give you an edge you’re back in the fight. You can also just switch in the upgrade with the highest stats, but if stat-tweaking is your thing, you’ll be in robo-hog’s heaven.

Equally worthy of consideration is the choice you’re presented with at the beginning of the level. Neurovoider lets you select one of three areas, each with varying levels of risk and reward. Do you go for the area packed with “Elites”, tougher variants of the game’s enemies, knowing you may pick up some more powerful upgrades? Or do you play it safe instead?

Whatever option you select, the randomly generated nature of the levels mean that you don’t normally know what you’re going to run into or where the reactors are.  Though if you do want to replay a particular set of levels, you can write down the “seed”, the code used to generate the levels, and re-input it later.  My sole interaction with this feature was typing “BIGHAIRYBOLLOCKS” into the code field just to see what happened. Spoiler: absolutely nothing of consequence. 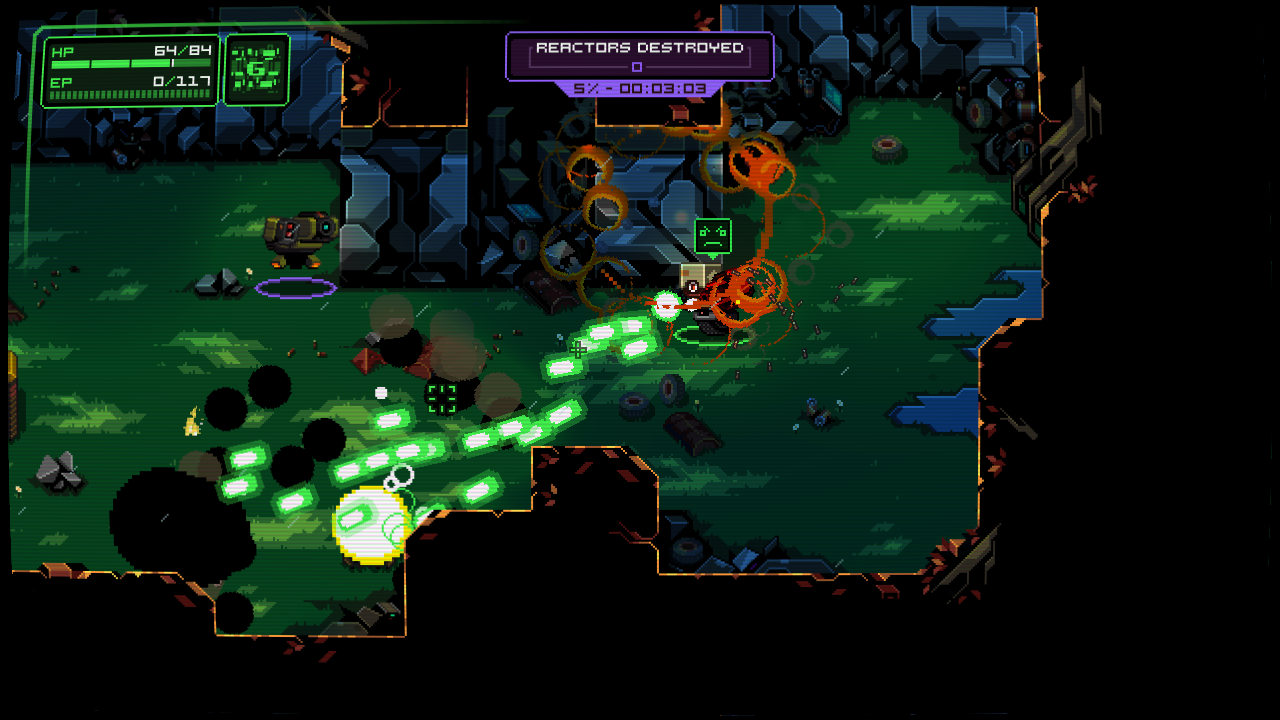 After completing four regular levels, you have to combat one of the game’s bosses. However, whereas a boss encounter is typically a grand occasion, Neurovoider‘s bosses are something of a let down. The ones I ran into looked disappointingly similar and could be beaten using the same attack pattern. This is at odds with the rest of the game which rewards you for exploring different weapon loadouts and component combinations. Instead, I just found myself getting a powerful melee weapon (there are a few in this game, though it’s ostensibly a shoot-em-up) and clobbering the boss up close.

But be under no illusions, cheap boss encounters aside, Neurovoider is hard. Like Dark Souls, only fun. You will die repeatedly, and have to start the whole twenty-level chain from the very beginning each time. With every level the game throws more and more enemies at you, to the point where you wonder how they’re making them faster than you kill them. Neurovoider also supports up to four players at once, which is a welcome feature when so many games are defaulting to online only multiplayer.

I’ve not reached the game’s final boss, despite a ludicrous number of attempts. Yet it’s a testament to Neurovoider’s sheer playability that I’ve gone back again and again – and will do so again after I’m done with this review. With each attempt you get a little further into it, upping your game each time. And the controls are responsive enough that you have to admit, grudgingly, that it’s your fault you died. Yes, you could have avoided those showers of bullets, but you reflexes weren’t quite up to it. I wonder when you’ll be able to buy those bionic implants Deus Ex harps on about…

Neurovoider expertly blends shooter and RPG elements, delivering concentrated blasts of arcade mayhem followed by a brief strategic respite. It’s tough, yes, but failure is rarely frustrating and you’ll end up jumping right back into the fray. Noisy, tough, but ridiculously entertaining, Neurovoider will have you praying for the robot apocalypse.

Neurovoider is available on PC, PS4 and Xbox One. We reviewed the Xbox One version.