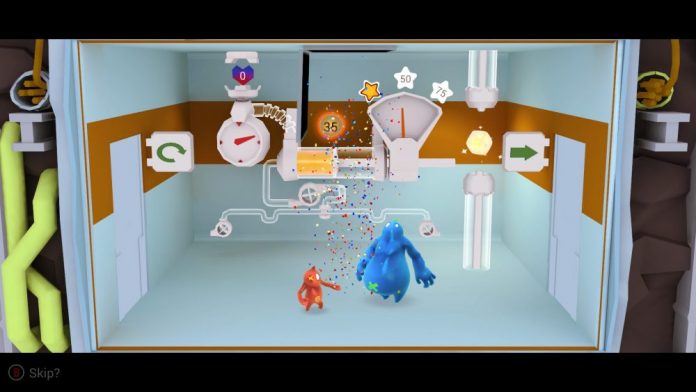 Ever since I played LittleBigPlanet on my dad’s PS3 around 2008, I’ve loved platforming games that encourage you to rely on friends to make it through each level.

I’ve never laughed as hard as when my sister and I would die over and over at the exact same point in the game, screaming at each other about how the other was doing it wrong. Of course I’d played games a lot like LittleBigPlanet before then, but there was something about the adorable characters and the manic but extremely fun and easy to learn gameplay that makes it stick out in my mind as one of the most memorable multiplayer platformers I’ve played to this day.

Shift Happens is a multiplayer platforming puzzle game from developer Klonk Games that has definitely been added to my most memorable list. This may be mostly due to the sheer amount of sabotage that me and my brother-in-law inflicted onto each other during our time with the game – and how it has taught me to never trust him again – but it also definitely has to do with its wonderfully enjoyable gameplay, adorable characters, and overall interesting concept.

In Shift Happens you play as Bismo and Plom, two blobby science experiments who are brought together by accident during an error at the place where they are manufactured. Bismo and Plom have the ability to shift their body masses, making them change between big and small. The problem is that if Bismo wants to be small then Plom has to be big and vice versa; neither can be the same size at the same time – at least not after the beginning tutorial levels. At the start of the game the levels are pretty easy to complete but quickly become challenging mind benders. You’re forced to really think about what to do next rather than charging forward as fast as you can. 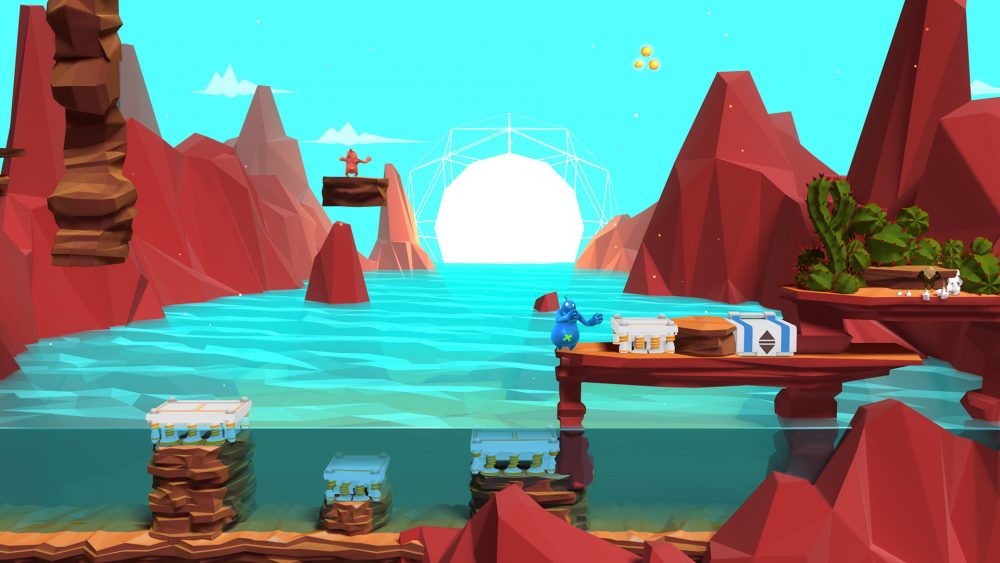 When you first start out, Bismo and Plom are in the laboratory where they were created and have to learn the basics of what they can do. Slowly they realise that not only can they shift between big and small, but they can pick up boxes – and each other – to get through the troubles they have ahead. Once they leave the laboratory they have to make it through the wild “forest” levels (or as my brother-in-law calls it, “Arizona – lots of prickly stuff”). As you progress you’ll also encounter dry canyons and horribly cold caves; each new area being much harder than the last. The hardest part of each level is that if both you and your partner die at the same time you’ll have to start the level over completely from the beginning. This mechanic is very unforgiving but definitely adds seriousness to the gameplay.

The main mechanic of Shift Happens is, as the name suggests, shifting between big and small in order to get through the level. It sounds pretty repetitive, but developer Klonk Games has done a fantastic job of making each level distinctively different. Some levels even reminded me of puzzles from Portal as you have to use momentum at times to make it across a large gap, or you have to catch your teammate at just the right moment so they don’t fall to their death into a pit of lava. Along with the goal of simply getting to the end, which is difficult enough as is, each level has golden bubbles that you can collect. This is where most of the competitiveness comes in: if you’re playing with a friend, you don’t share your golden spoils with each other. You’ll never ragequit harder than when you’ve collected 30 golden bubbles to your teammate’s 10, and then you die and they absorb all of your hard-earned gold just before the end of the level. There are also additional secrets and bonus items you can collect in order to get the best score possible at the end of each level.

The downside to Shift Happens being such a good multiplayer game is that it falls short when you play it by yourself. The single player campaign isn’t nearly as enjoyable without someone to help you figure out the solutions to the puzzles. You also have to  control both characters by yourself which quickly becomes very difficult and tedious. I didn’t care much for single player mode at all, but at least it’s included for those who do want to play by themselves.

There’s so much to explore in Shift Happens, and all of its secrets and bonus levels make the game something that completionists will love going back to. Don’t expect too much from the single player mode, but if you’ve got a friend who’ll enjoy puzzling with you, I highly recommend picking Shift Happens up. Just don’t be surprised when they stab you in the back and steal your golden bubbles.

Shift Happens is available on PS4, PC and Xbox One. We reviewed the Xbox One version.