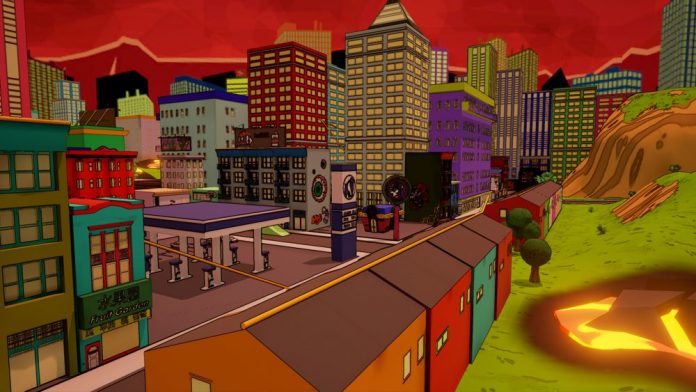 Imagine Goat Simulator. But instead of controlling a goat, you’re driving a car. And instead of just randomly running around doing goat things, you’re a taco delivery driver. That’s pretty much Tacopocalypse.

Released last week on Steam, Tacopocalypse is pure, crazy fun. It doesn’t take itself seriously, right from its over the top cartoon art style to its crazily over-sensitive controls that send your car ricocheting into the air at the touch of a button. It’s not for serious gaming; it’s for when you want a quick few minutes of absolute mayhem. It’s mayhem all over.

The main mode is Delivery, which you can see me play in the video below. Thrown into an open map, the aim is to wrack up as many points as you can as well as delivering as many tacos as possible. You earn money by delivering tacos, and can spent it to upgrade  or customise your vehicle. There’s also a multiplayer mode, Taco Tag, as well as a practice area to get to grips with the game’s unwieldy and sensitive controls – but all the better for throwing your car around like a maniac.

See me play Tacopocalypse in the video below:

It’s rough around the edges, sure, but when you consider that Cherry Pie Games, the team behind Tacopocaylpse is primarily made up of just three people, it’s a pretty impressive feat. And hey, when it’s this much fun to drive around like an absolute nutcase, who cares if it’s a little unpolished?