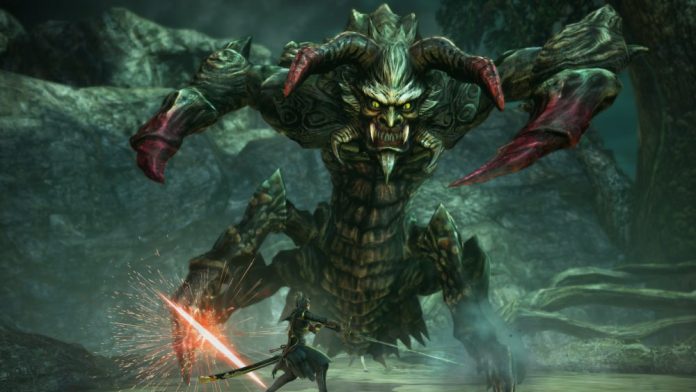 Toukiden 2 is your best bet for a current monster hunting adventure on console. Boasting an open world to explore freely, and plenty of Oni to slay, it fills a rather vacant gap in the console lineup. With some new pieces and refined mechanics, it’s a great alternative for those Monster Hunter fans.

I got into these kind of games from playing Monster Hunter 3 Ultimate, a game that I grew fond of. Later, I got my hands on Toukiden: Kiwami, which had a similar feel to it. Toukiden 2 is everything you want from a game of this style. While much hasn’t change between this installment and the last, what is there is well executed and polished. There are issues, repetitious activites/combat and the like, but for what it sets out to do it excels. If you’ve had time with any iteration of Monster Hunter or Toukiden, you’ll feel comfortable here. Becoming the ultimate slayer is a long journey.

Years after an unfortunate event during ‘The Awakening’, your character is saved by The Professor and brought to Mahoroba. This hub world is filled with everything you’ll need, including the blacksmith, shops, NPCs, quests, and your home. Mahoroba isn’t the most memorable town, but it consolidates your necessities closely together and allows easy access to everything. This is where you’ll select missions, arrange your weaponry, choose your teammates, and set up your Mitama. The hub world is easy to navigate, and filled with useful tips and training regiments to make the game more approachable. The training you can do here is excellently crafted and easy to follow.

The bulk of Toukiden 2 is spent honing your skills as a Slayer by, well, slaying Oni. This is done through missions, both main and sub-missions. Main missions usually select your teammates for you, and generally won’t place you in the open world of the Otherworld (aka anywhere outside Mahoroba). You’ll have a person to speak to that lets you select your sub-missions freely, in any order. These are usually just about killing x number of Oni in a certain area. Fetch quests and side missions can be found by taking to anyone in town, or in the Otherworld, who has a certain symbol over their head. These are more varied in their goals than the main missions, as you can do anything from protecting someone to farming material. Mission variety, as a whole, can feel a bit tedious at times. 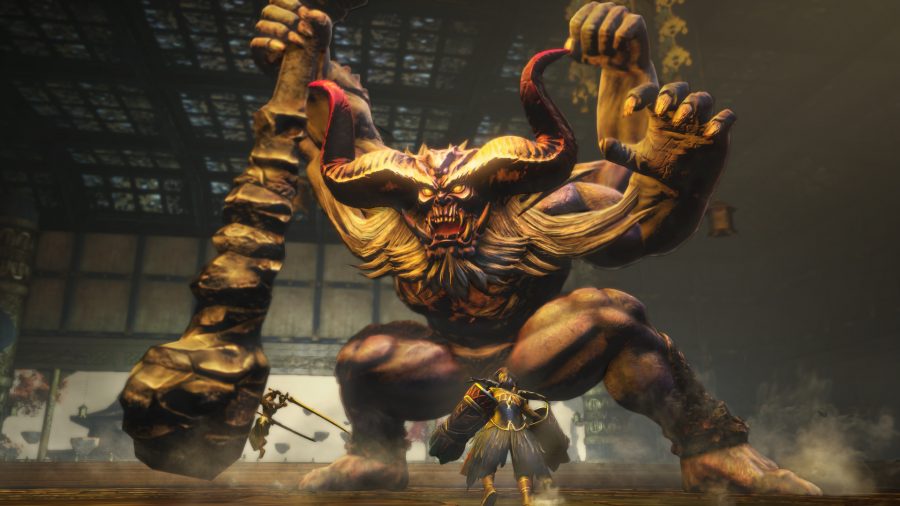 Toukiden 2 is all about the combat, though. A diverse set of weapons and skills allow you to find what makes you comfortable as a player. Master anything from dual daggers to rifles; just make sure you have a good handle on at least three types of weapons so you can make appropriate changes for each mission. Also, having a grip on several weapon classes can keep the combat from feeling bogged down. When a game pours most of – if not all – its effort into the combat, it can be rough when that part becomes so repetitious. Luckily, the addition of the Demon Hand and the expansive Mitama selection can keep you engaged. Even then, however, long fights can weigh heavily on your interest.

That, unfortunately, is commonplace in Toukiden 2. The ‘boss’ style Oni have insane amounts of health and ‘shield’. Those fights can take up to fifteen minutes of repeated button mashing. There are combos and abilities you can use that negate it from feeling like a button-mashing competition… sometimes. Removing the limbs of larger Oni is crucial to a quick fight, and you’ll want to spend most of your time hammering away at the same body part until it goes. Lucky for you, the NPC AI in this game is pretty damn good. They’ll target weakened limbs and pretty much never stop attacking, depending on how you direct them. But your arsenal is just as deadly as theirs.

The Demon Hand is the best addition to the game, and really the only new part that shakes up the formula. Along with your Mitama, or chosen spirit, it is what really dictates the flow of the battle. The Demon Hand allows you to traverse the environment, parry Oni attacks, grab Oni and fly towards them, and even remove limbs once the gauge is full. If you’ve played Toukiden: Kiwami, you’ll be familiar with the Mitama system. You pick a Mitama to attach to your weapon, which becomes your main power. Mitama can be focused on attack, defense, healing, speed, etc. Toukiden 2 also allows you to attach Mitama to your armour and Demon Hand for more passive abilities. If they match in type, you get boosts, and if they match in terms of being peaceful, honorable, or the like, you get more benefits.

The AI in Toukiden 2 is some of the best around. Whether you tell your teammates to aid, attack, or go free, they respond quickly and sharply. They don’t waste any moves, attack precisely, and help tremendously. Being able to select your team also allows you to selectively build friendships with your favourite buddies. This added wrinkle makes you feel more connected to the characters, and they’re a lovable, relatable group. Although the narrative might not grab you, the characters surely will. 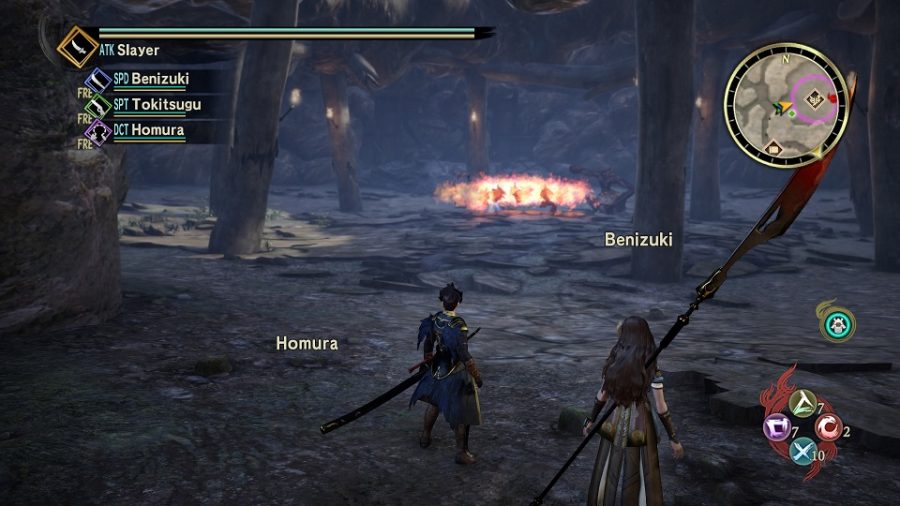 Fighting in Toukiden 2 can be exhausting. After a long battle, the flaws and annoyances start to show. You can’t jump, blocking and parrying is a two-button deed often misfired, and larger Oni have attacks the go on for what seems like an eternity. That said, the meat of the combat system is wonderful. The combos are simple and fluid, and the dodging is spot on. Although, cancelling a combo to dodge sometimes works and sometimes doesn’t. It’s a frustrating limbo game that never works when you want it to. But the combat needs to shine in a game like this, and in that regard you won’t be let down. Combat is precise, tight, responsive, and hectic.

Another great addition to Toukiden 2 are the Ruins missions. By exploring each Age (aka area) in the Otherworld, you’ll run into Ruins. This is where the Machina (the little robots, one of which has a human soul in it and is your close friend) come from, and they are littered with Oni. You can do endless runs, allowing you to exit every five floors. Or, you can do ten floor missions, which end after the floor ten enemy is killed. These missions are great for farming materials and trying out new Mitama and weapons. As a counter to standard ‘kill these’ missions and fetch quests, it’s a fun little boss rush idea. You’ll get a better feel for higher level combat, team management, and combat effectiveness. It’s a great addition to the game.

Toukiden 2 has a narrative behind it that, while not immensely engaging, sets itself ahead of its predecessor. There is intrigue, mystery, humour, deception, action, friendship and all those good storytelling devices. Diving into the lore and little pieces you find throughout the game about backstory gives more depth to an already flourishing world. There’s plenty of mysticism and folklore to keep you satisfied, along with good writing and character development. Although overshadowed by the action, it shouldn’t be looked over.

Toukiden 2 is a great example of “it it ain’t broke, don’t fix it”. The core of the game comes from Toukiden: Kiwami and receives a good dose of polish, and Koei Tecmo added just enough new material. It’s another solid entry in the series and probably your best bet for a demon-hunting experience on current gen consoles. Though at times it can be monotonous and tedious, it allows the player to truly variate the gameplay. It doesn’t hold your hand or spoon feed you, and that’s always nice. With Toukiden 2, it’s good to be a Slayer again.

Toukiden 2 is available on PC, PS4 and PS Vita. We reviewed the PS4 version.