Warhammer Quest originally began its life as a table-top board game.

The video game adaptation stays very true to its roots, featuring the same mechanics and turn-based play style as the original. For fans of the board game, there’s a lot lot to like here, if for no other reason than a good kick of nostalgia. But for people not familiar with the Warhammer universe or the board game, the game feels shallow and undistinguished compared to other dungeon crawlers. Be prepared to deal with archers that miss more often than they hit, and leading to some frustrating battles where the randomness of the hit percentages leads to annoyance, especially in the early parts of the game.

First released on mobile, Warhammer Quest was then ported to Steam and now, consoles. It’s fair to say it hasn’t survived the jump to current gen well. The most glaring example of this are the game’s outdated visuals that look like they haven’t been updated since its iOS release. Drab textures and character models instantly leave a lastng poor first impression of the game. Visually, Warhammer Quest isn’t particularly attractive to look at. Poor character design sometimes makes it hard to distinguish between your own warriors and the enemy. Attack and spell animations and effects are dull and unexciting.

Another consequence of this poor porting process is the way the game controls. Not just in navigating the games many menus,  but also the levels themselves. For a game that relies so heavily on menus, scrollable text and precision selection, very little has been done to optimise the game for use with a controller. The game feels cumbersome to control, especially at first. After a few hours of play, I did start to become quicker at issuing commands to my warriors. However, I can’t help but shake the feeling that a movable mouse pointer would have been preferable to the current slow and rigid controls. Even some shortcuts for navigating menus would have gone a fair way to alleviating some of the tedium caused by the clunky controls. 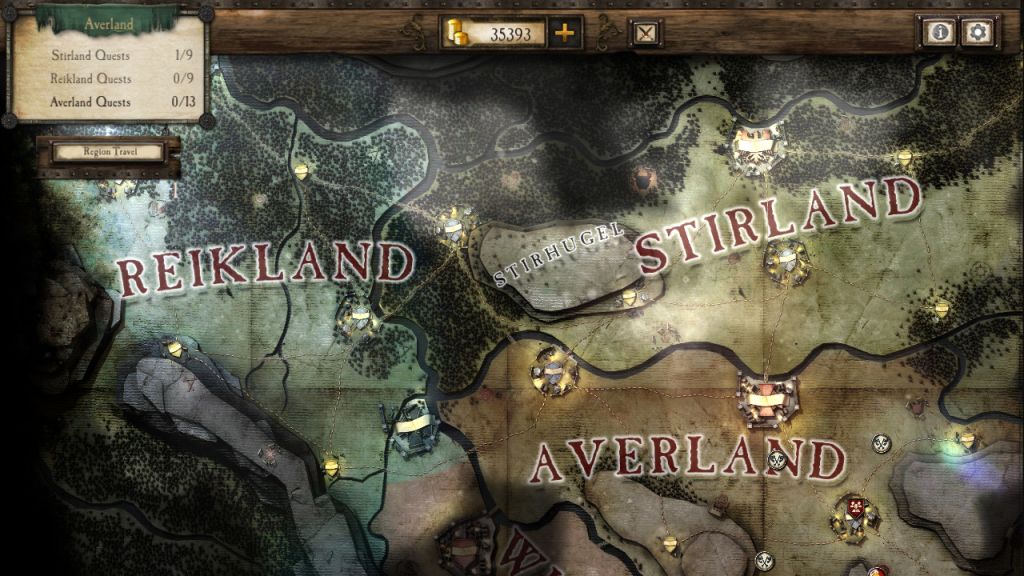 The majority of the game is spent hacking, slashing and spell casting your way through dungeon after dungeon. The gameplay is simple, but solid. However it definitely becomes repetitive fairly quickly due to little variation in the combat. Even magic spells feel ungratifying. They are also poorly explained by the game’s tutorial.

Dungeons are pieced together with pre-made tilesets. The layout of each dungeon is randomly generated which would have been great, if only there were a bigger pool of sets for the algorithm to choose from. I quickly began to recognise the same sets, leading to levels that become samey and tedious very quickly.

When you’re not dungeon delving, you’ll be traversing the world map. Although relatively pretty, its simple layout leaves a lot to be desired. Towns act as trading posts, a place to level up your warriors, adjust your warrior roster and gain upgrades. Upon arrival at a new town, a new quest is often revealed in the surrounding area. Quests and other encounters are delivered through basic text boxes. Essentially all quests involve the same objective – clear the dungeon of monsters, perhaps ending with an underwhelming boss battle. I say underwhelming because most bosses are just stronger versions of other monsters in the game, with more hit points and damage.

Where Warhammer Quest triumphs, however, is in its writing. It does a great job of drip-feeding lore without it ever feeling forced. The player’s relatively extensive journal also helps to expand the rich lore of the Warhammer universe. Encounters are often humorous and interesting. It’s rare for me in a game that I find myself wanting  to read several screens of text. Especially when I know the outcome will just be another dungeon clearing quest. But Warhammer Quest keeps the player entertained with lines such as “Looks like your party has an ass to find” when tasked with searching for a missing donkey. 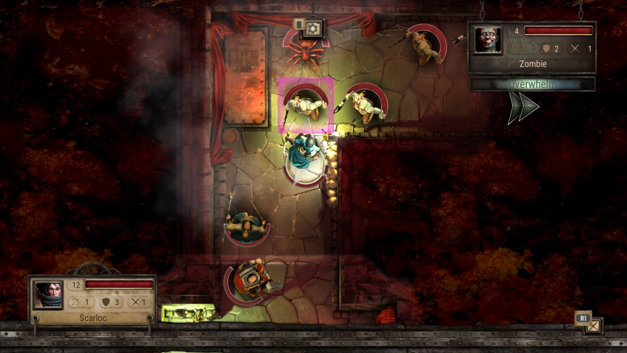 At the end of the day, every pixel of Warhammer Quest screams mobile game. That in itself isn’t necessarily a bad thing; I imagine playing the game on a mobile device would be a very different experience, and its short levels and simple controls lend themselves well to mobile devices – but it’s just a pity the developer Rodeo Games couldn’t find (or didn’t bother) to implement a control scheme better suited for consoles. Under the hood Warhammer Quest is a good game – at least for a while. The gameplay loop of killing, looting and upgrading is an enjoyable one; it’s just a shame it gets buried underneath a few negative issues, exacerbated by frustrating controls.

Warhammer Quest is available on PC, PS4 and Xbox One. We reviewed the PS4 version.