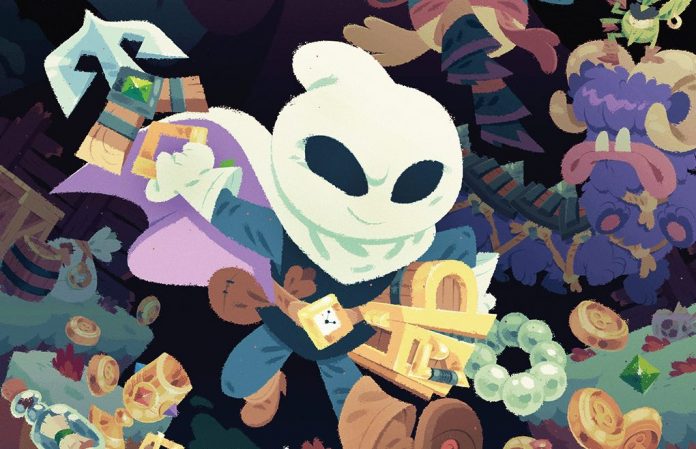 It’s all too easy for me to tell you that Tribute Games’ new 2D pixel-perfect rogue-lite platformer Flinthook gripped me instantly, hooking me in with its acute sense of retro aesthetic charm and silky smooth gameplay.

And puntastic prowess like this is made all the sweeter when such a statement couldn’t be more true.

Immediately firing up the game, you’d struggle to find a reason not to be astounded by the level of wit and confidence Flinthook oozes. This is made possible largely thanks to its lovingly-realised 16-bit art style, but also in the way it chooses to riff off of established concepts of 18th century mercantilism, effortlessly combining it with many of the tasks and objectives you’d typically expect a hypothetical retro-futuristic space pirate would have a hand (or in this case, hook) in.

Such objectives rear their head in the form of bounty hunter contracts, and these act as the main narrative and progressive crux to the game, which sees our titular hero Flinthook swinging and zipping his way throughout various procedurally generated rooms, defeating enemies and upgrading items and gear as he does so. It’s no secret that a workman is only as good as his tools, and if there ever was one, Flinthook is the game that proves it.

After completing a short but rather effective tutorial section which does a great job at relaying Flinthook’s core mechanical concepts, it isn’t long before you’re thrust into making the choice in where to go first in order to find your initial ghost gems. Armed with your trusty hook in one hand and obligatory space gun in the other, ghost gems are the currency required to feed your compass, a compass capable of letting you access that elusive next bounty target. 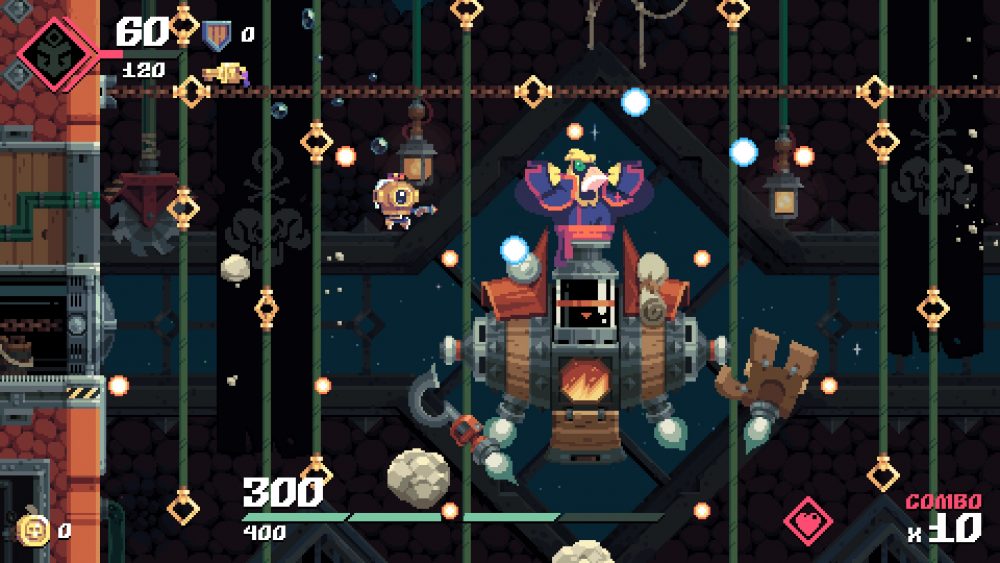 The levels you’ll be guiding Flinthook through are littered with gold hooks just begging to be latched onto. The hook’s trajectory is easily determined by simply prodding your controller’s left stick into the general direction you’d like to zip to, and boom – you’re off. Because this is the same button input as movement, gliding your way to dodge an enemy, grab a weapon, or just generally progress to the next randomised grid section of the level is never a chore.

It’s worth noting that while the belly of each ship you’ll be traversing through is by and large randomised and unique to each playthrough, Flinthook is very much a rogue-lite as opposed to a full on fresh experience every time. In the effort to wrangle your way to the next scoundrel or miscreant, you’ll accumulate coins, which stay with you regardless of when you lose a life, letting you purchase many an upgrade from the game’s built-in “black market”. Your upgrades remain with you as your rank continually increases.

So while some players might be left slightly disheartened by the fact that Flinthook isn’t quite a roguelike in its harshest and purest form, it does mean that each time one of your runs does unexpectedly come to an end, you’ll always be readily equipped to tackle it head on again, much stronger than before. Perks range from anything such as garnering 10% extra XP to gaining more firepower following a strong combo chain. There are a limited number of perks slots available, and each is worth a unique amount, so it’s worth customising a loadout to suit your play style.

I personally appreciated this subtler sense of progression that Flinthook consistently rewarded me with. Rather than getting knocked back over and over again causing me to question my own skill and ability, the promise of a new booster pack as I ranked up at the end of a run pushed me to keep on going. Because of this, a short 30-minute play through easily turned into a 2-hour session of shooting, looting, and of course, swooping. 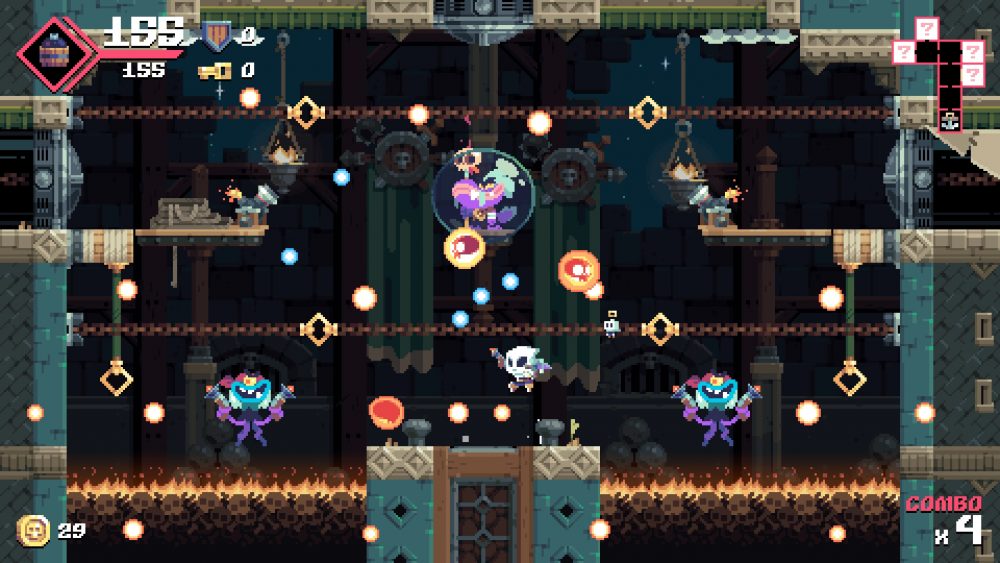 Backed up by an appropriately chiptune-inspired soundtrack and varied enemy design, Flinthook most definitely has a compelling quality to it that most other games in its genre often struggle to find. While it can be common for roguelike games to take a huge swing by providing an experience that’s heavily reliant on repeat playthroughs only to miss horribly, I can see Flinthook being able to stand with the best of them in the long run, alongside titles such as The Binding of Isaac, Rogue Legacy, and others. It helps that there’s a challenge mode waiting to be unlocked early on, letting players duke it out in daily and weekly maps.

What Flinthook might lack in lore, story, and cohesion, it more than makes up for with its boatload of personality and style, all of which find themselves backed up by some of the smoothest 2D platforming gameplay around. It’s all built around the hook, and once you put in the time to master it, you’ll almost certainly be anchored.

Flinthook is available on PS4, Xbox One and PC. We reviewed the PS4 version.