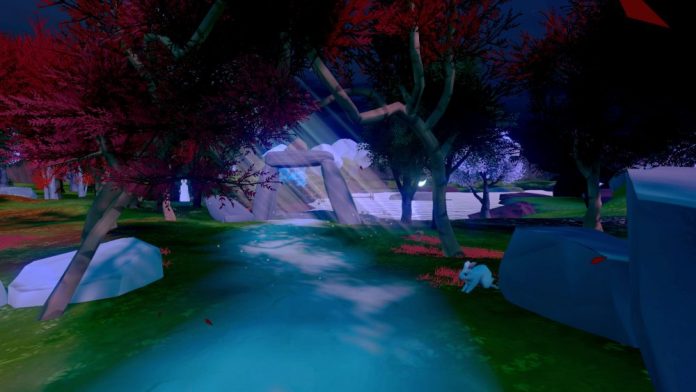 Fancy a break from the stresses of life? Want a game that will help you to relax? Are you intrigued by the philosophy in life and death? I recommend taking a midnight stroll through Heaven Forest Nights.

So how does a simple exploration game tackle the deep, dark and mysterious theme of death? Well, it situates you in the middle of a forest at nighttime and tells you to go seek it out for yourself. For as far as the screen will allow, there is a vast expanse of wilderness in front of you, that you must venture out into. There is also a vast array of animals wandering around – rabbits, foxes, deer, and white tigers – but pay them no mind as they don’t seem to be aware of you at all.

The strangest thing I had to grapple with in this game is that there are absolutely no instructions. There is no menu, no pause option, no guide, no map. For the first 30 minutes or so  I wandered around trying to find something that would tell me what to do. I soon figured out, however, that that was in fact what you are actually supposed to do: wander.

There are glowing scrolls located around this elusive forest, and each one is more confusing than the last. Many of them detail what many people believe to be the “meaning of life” such as happiness or faith, but some discuss the law of nature, or the law of thermodynamics, explaining how life cannot simply exist without destruction, or an end. 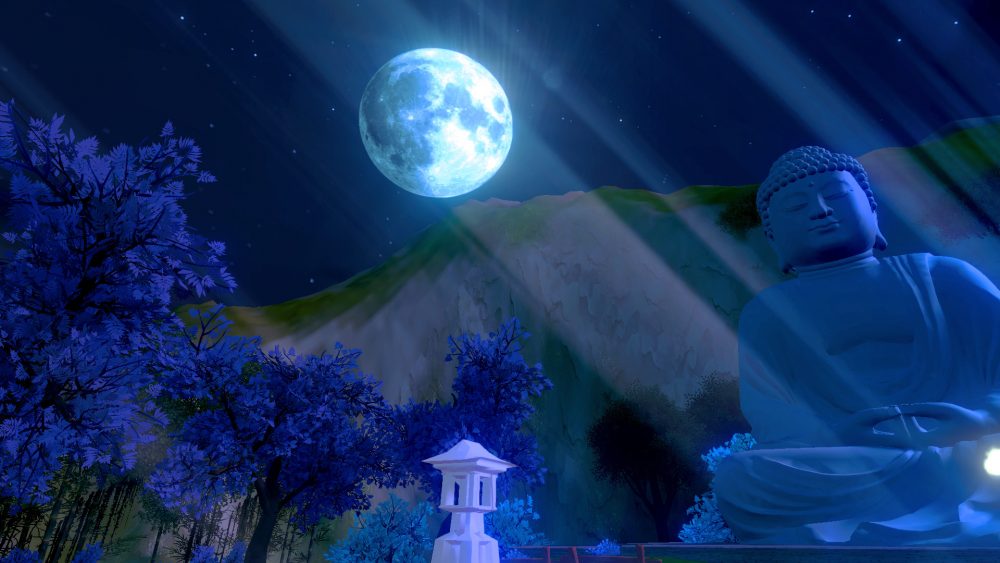 As someone who has studied philosophy for many years, I was truly intrigued by the scrolls and immediately set out to find more. I believe this is the true purpose of Heaven Forest Nights; to read every scroll and discover the overarching message hidden within them. However, though the game could be seen as educational, perhaps a very basic knowledge of existentialism could be useful before playing, as much of it is hard to understand on its own.

There is a definite struggle, as the game strains to really expand beyond being a walking simulator. Though I understand Heaven Forest Nights is almost purely meditative, there is a distinct lack of any real connection for players. There are no characters and no story which, although makes sense, can be detrimental. It means there is nothing for players to hold on to, no one to vicariously live through and it makes everything feel too quiet.

I don’t know what is was exactly, but something about the game made me want to keep playing – and I think it has something to do with how well the game creates atmosphere. The constant sounds of birds tweeting, a river flowing, and trees rushing are truly immersive. However, the randomly interspersed snippets of music don’t seem to add anything to the mood. There are many instances where the music doesn’t fit with the scene or the gameplay, and sometimes I even felt unnecessarily uncomfortable, as if something could jump out and this would suddenly turn out to be a horror game.

That tension drew me away slightly, and though for the majority of the game I was enjoying myself, and was fully interested in finding these scrolls, there was a certain underlying uneasiness I couldn’t shake. I do wonder if it’s because the game is set at night, and a forest at night is, typically, not a particularly friendly place to be. Having said that, it could still very much be considered meditative as for the most part it is actually relaxing.

Subjects like life and death can be decidedly hard to tackle, and it is clear what Heaven Forest Nights is attempting to achieve in that it wants its players to think for themselves, go their own way, forge their own path, seek out knowledge, and make decisions without the need for instruction or guidance. I believe the game is highly successful in achieving this, but the problems lie in the gameplay itself and with some minor improvements to the story, the characters, and the adventure elements, it could be a thoroughly excellent game.