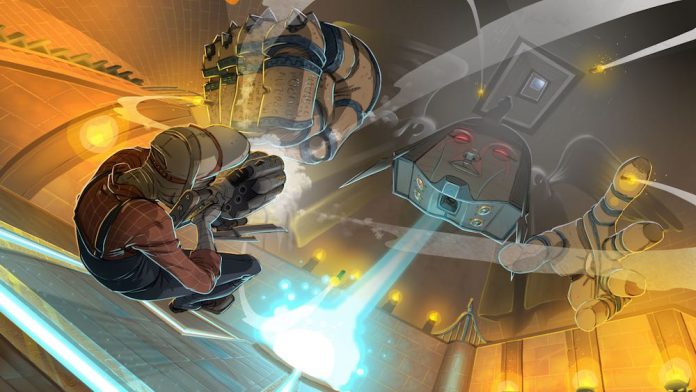 Move over, Indiana Jones. You too, Lara Croft. There’s a new tomb raider in town, and they’ve got one hell of a mouth on them.

That mouth certainly gets put to good use in Immortal Redneck, an Egyptian themed, rogue-lite first-person shooter. The titular redneck spouts countless quips as he traverses one of three pyramids, spewing everything from random expletives to Back to the Future references. Ordinarily, this would seem out of place, considering the myriad of mystical monsters in his way that would have most folks running in terror. Then again, most folks probably aren’t equipped with enough firepower to make Michael Bay shed a tear.

If it’s not evident by now, Immortal Redneck plants its tongue firmly in cheek and plasters all sense of seriousness against the wall with a well-placed shotgun blast. With an unlimited sprint and a variety of useful weapons, the game encourages players to forego a slow, methodical approach to things in favour of just running in all guns blazing. The combat is fast, fun, and incredibly satisfying, often involving frantic dashes, flying leaps, and sudden evasive manoeuvres when it becomes clear that reloading is necessary. The platforming feels fine-tuned, with areas able to be traversed with ease, whether walking or running full-tilt. The only minor exception is dropping down from ledges, which can be difficult to do without hitting the ledge and being hauled back up.

The only context that’s given for your actions is that you’ve woken up mummified in the middle of Egypt, with no idea how you got that way. Standing between you and the answers is an endless army of laser-firing mummies, winged skulls, Anubis archers and more. Entering a room immediately locks you inside, spawning all manner of creatures to contend with, and the only way to escape is to eliminate every one of them while collecting as much ammo, gold, and health-restoring steak as possible. Thankfully, the enemy slaughtering is made easier with an x-ray vision ability that allows enemies to be spotted through walls. It’s a great addition, as it only kicks in after being out of combat for a while, ensuring that things aren’t too easy, but that time isn’t wasted attempting to hunt down the last enemy. 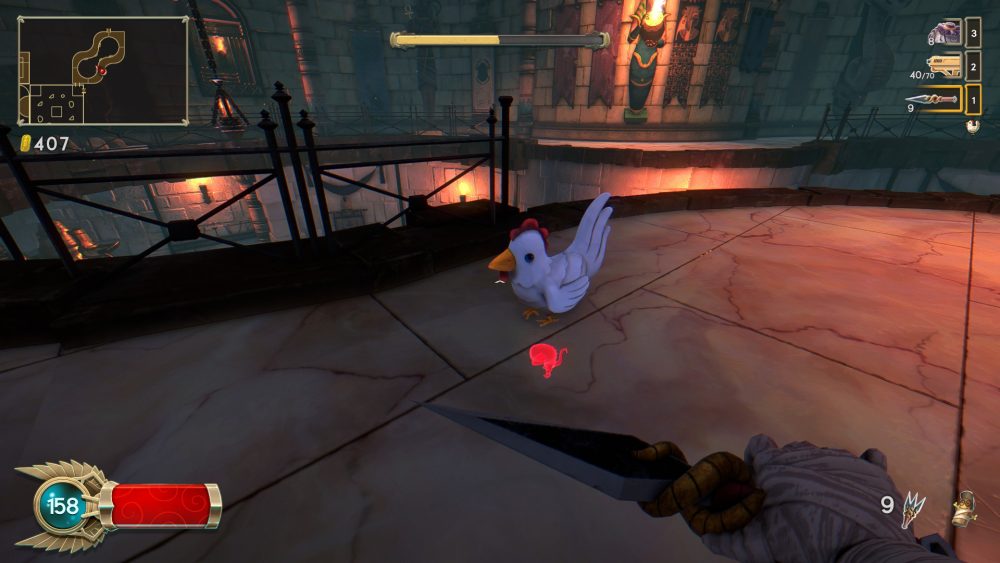 One thing that Immortal Redneck does phenomenally is variety. Each run through a pyramid features random room placements, and while the rooms themselves have consistent layouts, not knowing what might be through the next door still keeps things tense. It also encourages players to learn the ins and outs of each room type, often rewarding explorers with useful enemy choke points and item-filled chests.

While these chests tend to be filled with some distribution of the meat-ammo-gold trifecta, they also frequently contain new weapons and abilities. The sprawling arsenal of weapons ranges from traditional choices like assault rifles and revolvers to Tesla flamethrowers and crowbars. Even after all the time I’ve spent with the game, there are still some that I have yet to come across. Each has their own use and will likely appeal to different types of players. The lone exception is the AK-47, which absolutely murdered the game’s performance, causing freezes and stuttering with every shot.

The same range of options goes for the abilities, which take the form of scrolls. These end up being something of a gamble, as some scrolls offer incredibly useful upgrades, while others will actively hamper your journey. In my experience, the most aggravating example of the latter came in the form of a scroll that made it so every shot consumed twice as much ammo. Considering that the redneck inexplicably has an aversion to punching, running out of ammunition is effectively a death sentence. Few things are more frustrating than running out partway through a boss fight and realising that there’s literally nothing you can do to save yourself. However, the risk of getting such a detrimental scroll is often worth it, considering others can have such useful (and entertaining) effects such as giving each of your shots a small chance to transform enemies into chickens.

Despite all the tools at your disposal, death comes quickly, especially early on. Luckily, that’s where the “immortal” part of the title comes in. See, being cursed to live life as a mummy has its perks: namely that death is merely a one-way trip back into a sarcophagus. Immortal Redneck approaches death in a manner similar to Rogue Legacy, where gold from the previous trial can be spent on a branching upgrade tree to gradually improve the redneck’s abilities. A merchant can also be unlocked, whose wares include scrolls that are received at the start of a run, badges that give various advantages, and the ability to “lock” the layout of the pyramid from the last run; the latter comes at the cost of removing all the gold from the pyramid. After all upgrading has been completed, the toll to re-enter is any remaining gold, forcing a clean start for each attempt.

Among the upgrades are also a selection of unlockable classes, each with their own unique starting weapons, passive/active abilities, and stats. After each death, a prompt appears to choose one of two classes that are randomly selected from the pool of currently unlocked ones. This further encourages diversity in play, as there’s no guarantee that a personal favourite class will be available every time. Even without this, the classes feel distinct enough to keep things feeling fresh, whether it’s Seth’s electricity-infused weaponry or Apis’ temporary invincibility.

Regardless of which class is chosen, the same redneck voice remains, commenting on just about everything that occurs on-screen. While the varied dialogue is impressive, the quips range from cheesy to downright cringe-worthy. It wasn’t long before a trip to the (surprisingly in-depth) options menu was necessary to crank the voice volume down. That’s a bit of a shame, considering it effectively cuts out the “redneck” part of the game’s theme, save for the catchy, banjo-infused soundtrack.

Thankfully, the Egyptian aesthetic is unique and detailed enough to make up for this. The visuals are quite polished, and diverse lighting and environmental hazards keep each room feeling new and interesting. Empty vessels are scattered across the floors, shattering on contact and leaving shards strewn across the ground. The enemy designs are also great, managing to be cohesive with the setting, despite half of them looking like they walked out of an eighties cartoon.

I had some apprehension going into Immortal Redneck, as the last rogue-lite FPS I played was Tower of Guns: a game that frustrated me due to how frequently death would come at the hands of some unseen projectile. However, largely through its surprisingly nimble protagonist, Immortal Redneck manages to feel punishing, yet fair. Rewards are doled out frequently enough that almost every run ends with the ability to upgrade something on the skill tree, allowing the game to maintain a forward momentum that makes it difficult to put down. It’s a shame that only one half of the premise truly shines, but hoo-boy, does it ever shine.

Immortal Redneck is available on PC.