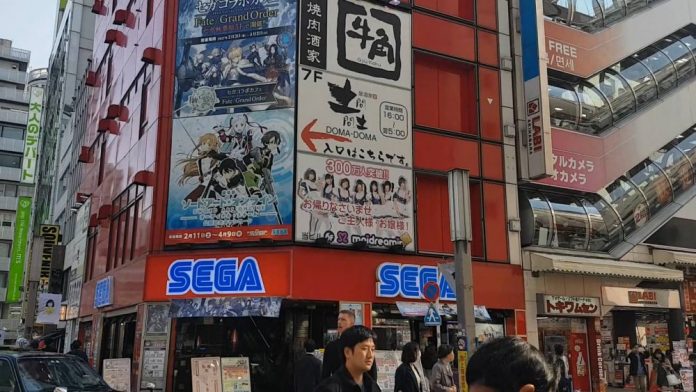 I was recently lucky enough to visit Tokyo for the first time.

As someone who’s been playing video games their entire life, and plans to one day make a living writing and talking about them, this was really a pilgrimage to the promised land. As much as I had heard about and researched what an amazing gaming culture there is in Japan, nothing could really prepare me for the entirely different world that I found.

The main thing that stopped me in my tracks during my visit were the thriving, undying and frankly ridiculous arcades. Visiting these places was unreal to me. In the UK, arcades are monolithic shrines you sometimes see, mostly in bowling alleys and amusement parks. Even then, British arcades are run down, expensive, and mostly filled with sport-orientated machines, not video games people are dying to to try out or master. The questions running through my head after visiting the third arcade I came across in just two city blocks were numerous, but the main one that stuck with me was: how on earth have these arcades not only survived, but managed to thrive to the degree that they are? 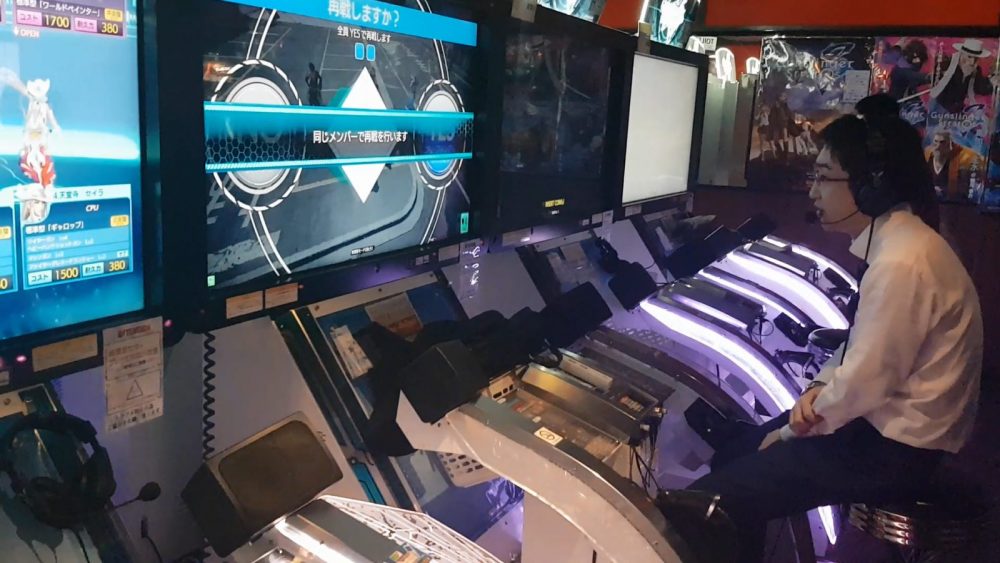 Coming up for 20 years old, I was born in the years that console gaming was beginning to really take over. My first console was a Nintendo 64, and shortly after that my brother and I were lucky enough to acquire a PlayStation. These early years were amazing, but sadly I was too late to the gaming party to grow up visiting arcades, spending my time gambling away my pocket money in an attempt to beat a game. Instead, my experiences of arcades were the occasional trip to go bowling, begging my parents to give me their hard-earned cash so I could die some more at some rubbish shooting game. This is, in my opinion, problem number one. British arcades in my lifetime have been far too expensive for me to be able to commit to them. Most of the time, one play is worth £1. A pricey fee to pay if it’s a difficult game. In Tokyo, 1 play is 100 Yen, which with the current exchange rate equates to 73 pence. This might not seem like a big difference, but I’m certain if British arcades were only this much, or even 50p, they’d get a whole lot more attention. The machines in Tokyo aren’t nearly as stingy either, as the time you get for that amount is so much more than what feels like 30 seconds in the UK.

Whilst some arcades at an amusement park might work on a token/reward system where you exchange your coins for playing tokens, Japan has a much more streamlined equivalent. In Tokyo, you can get a “gaming card”,  which works in a similar way to an Oyster card. To start playing, you scan your card over the machine and a fee will be deducted. This could potentially work out more expensive for you if you weren’t careful, but at least its an option that’s been put in place to make things more accessible. With arcades, the trick is to make the player forget they’re spending money on what they’re playing because of the fun they’re having. Controlling or simplifying the economy in order for this to happen is a big reason I believe Japanese arcades are still thriving. 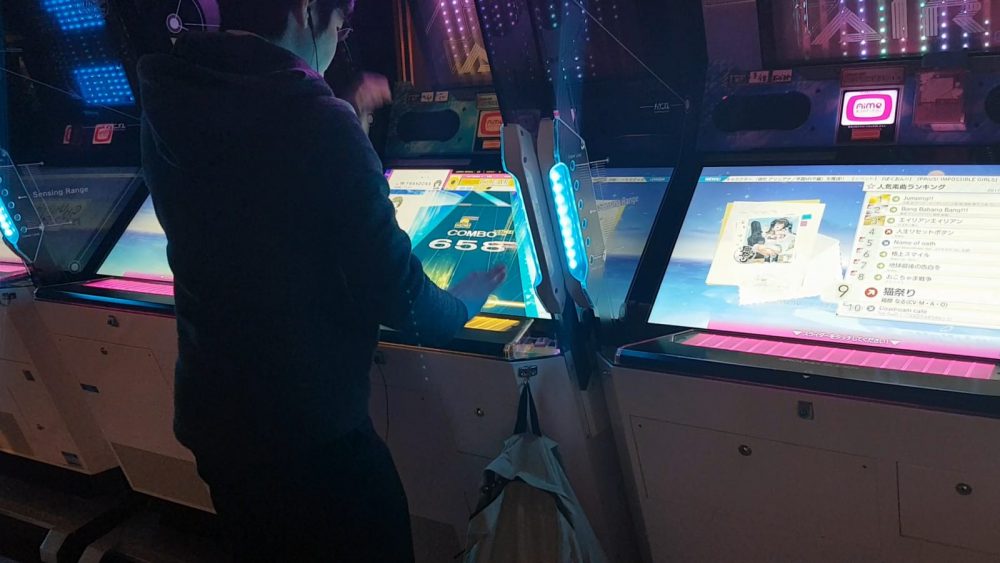 Moreover, arcades in Japan have rolled with the times. A big reason arcades died out in the western world is because home consoles became the dominant way people play games. But in Tokyo, arcades have evolved to be able to compete with this. The key to doing this was to change the type of games people could play at the arcade, and Japanese companies that make and design games have allowed that to happen. In the UK, you can go into an arcade and possibly find some car simulators, some motion controlled shooters, and if you’re lucky, a pod-type shooter that’s a mix of both. In most cases I’ve seen, that’s about it. In Japan, arcades are usually at least five floors tall, and they’re organised. On the ground floor, you’ll find the prize machines with the claw-hands, or as I like to call them, “Throw-away-your-money-machines”. The ground floor is really a warm up for what’s to come. Take an escalator up a floor and you’ll find an entire floor dedicated to rhythm-centric games. Think Guitar Hero where there’s one difficulty and it’s expert; think Rock Band with drums where people bring their own drum sticks; and on top of that, machines that are an advanced and impossible version of Tap-Tap Revenge. These are some of the most popular destinations in the arcades. People will take a bag of sports clothes with them, take a towel, special gloves used to not get blisters on the machines, and they’ll set up camp at their favourite game. These people will stay there for hours on end, sweating away like they’ve been to a spinning class, destroying insanely difficult levels and tracks on these machines.

Take another escalator up and you’ll find the floor dedicated to more traditional video games we’d recognise. On this floor you’ll find games like Dragon-Ball Z, Tekken 7, and sometimes more retro Street Fighter games. One which seemed extremely popular was a team-based shooter that had a headset attached to the machine. All of the machines on this floor also had online multiplayer support. The floors keep going up, and on others you might find entire areas full of people playing a horse-racing RPG where you take control of a horse and its attributes, then bet on it come race time. Other floors might have a central area that’s home to a huge table-screen fishing game. On another floor you’ll probably find gambling machines, photo booths and driving games. The list goes on and on and on. While the western world focused their creativity on console gaming, the Japanese filled the void left behind, and they haven’t stopped creating. Japanese companies like Capcom, Sega, Namco Bandai and Square-Enix, have all fired out machines and games that people are eager to play in the arcades. This is another huge factor in why these arcades are doing so well. Game developers haven’t left them behind, and they’ll be making a killing because of it. 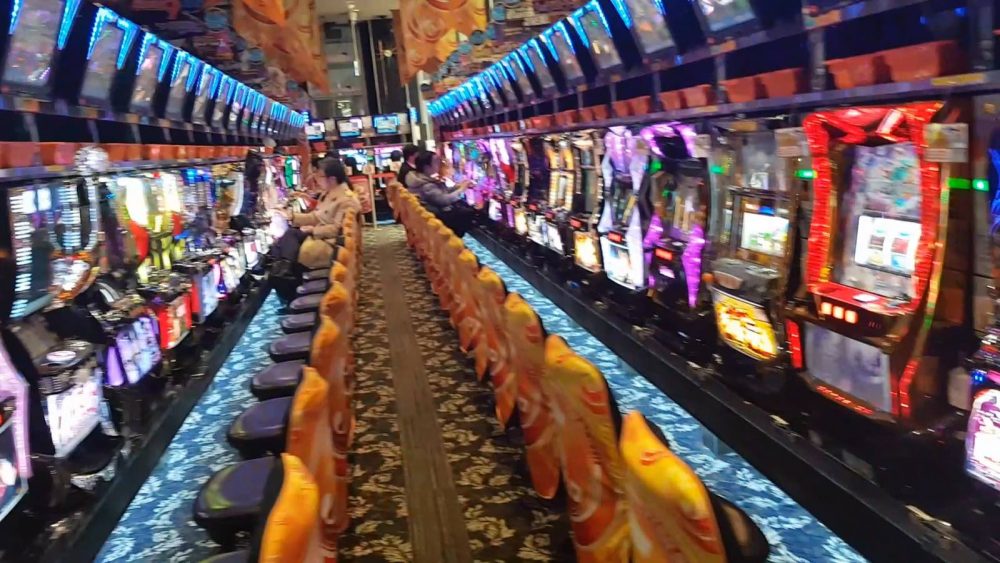 People are visiting these arcades because they have things they want to do and games they want to play in them. They aren’t a novelty that people might visit once a year so they can show off their basketball skills. There is such a wide variety of people that visit the arcades on a daily basis in Tokyo because there’s literally something for everyone. Don’t find fighting games that fun? That’s okay because there’s probably something for you just a floor away. There is a huge demographic being targeted there, and significantly, it includes women. I’m sure a lot women in the UK would be intimidated to step foot in an arcade without a boyfriend or brother by their side, yet in Japan there are just as many women present as men. Again, because there is such a wide variety. Japanese arcades have evolved with the times, and that’s why they’re still breathing so much life.

Japanese arcades are unbelievable. My trip has actually left me a little sad in some respects because I know that the chances of arcades in the UK coming back to life and giving people the brilliant experiences that I had are very slim. It honestly is an entire world of gaming that the west is missing out on. Whilst that’s definitely sad, it also makes me extremely excited to return one day to once again spend an evening in awe of the gaming kingdoms that are Japanese arcades.