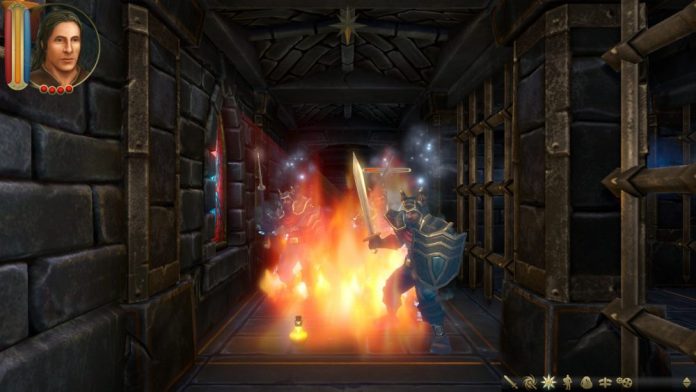 Old-school dungeon crawler The Keep sends you on a lone journey through dank dungeons and menacing mines.

The nameless protagonist of The Keep wouldn’t last a second in the world of Game of Thrones. He exhibits the kind of conduct that, were he in George R.R. Martin’s series of books, he’d be dead in two seconds flat. In his world it’s public knowledge that everyone who enters a particular town, a town known to be inhabited by an evil wizard, disappears. So what does he do? Like an absolute imbecile, he wanders right in. However, he isn’t instantly dispatched by Evil David Blaine. Instead, the wizard casts him down into a deep and distinctly unwelcoming dungeon. As the protagonist, it’s up to you to hack and slash your way through a variety of foes and, presumably, confront said magician.

The Keep is a tile-based 3D dungeon crawler, hearkening back to the days of Dungeon Master, Captive, Knightmare and other hack-em-ups. You move through the dungeon one square at a time, moving in ninety degree turns. You may find this a little jarring at first, particularly if the last RPG you played was Skyrim, but you’ll get to used to it. This being an old-school affair, the game does its level best to kill you. Even before you run into any foes, you’ll probably have died at least twice due to stepping on pressure pads or stumbling into a pit. The Keep features a few basic puzzle elements, often requiring you to flick switches in a particular order or use rocks to weigh down the aforementioned pressure pads.

The Keep also sports the usual role-playing trappings such as upgradeable equipment and levelling up, but it also tosses in a few original ideas. You engage in combat by swiping across the screen, but The Keep also lets you perform combos by performing more intricate attack patterns. The magic system is also a little different. You collect runestones and perform spells by swiping across them in a particular order. And while you can refer back to scrolls to see which spell requires which runes, that’s not an option in the heat of battle. So you’re left having to remember the correct sequences; the more spells you learn, the harder it is to remember them, which is a surprisingly “realistic” and effective approach. The foes you I encountered, spiders and guards, all attacked up close, though other enemies may fling their own spells at you.

Yet despite these innovations, The Keep, didn’t manage to hook me during the time I spent with it. That I was playing the same oddly bland character, with no option to assemble a party, certainly didn’t help.  That said, it could be that the game picks up later on and that perseverance will pay off.

Should you be sufficiently intrigued to venture into The Keep, it’s currently available to purchase on Steam.