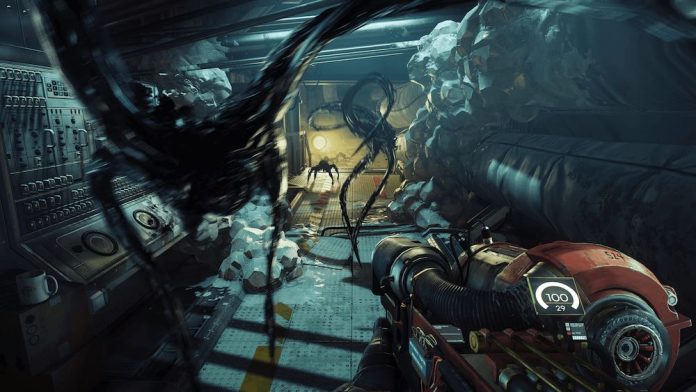 Prey‘s demo offers a promising taste of the full game, though it also feels a little over-familiar in places.

Prey’s history is only marginally less convoluted than that of the critically panned Duke Nukem Forever. Having spent an hour or two with the game, which has existed in concept since 2006, I doubt that we’ll see Prey gracing bargain bins mere weeks after release, as was the case with Duke Nukem Forever. By the time I’d finally put down the joypad I’d been blindsided by the game’s story; beaten several shadow-spiders to death with a wrench; upgraded my brain by cramming a metal spike into my head; and developed a deep distrust of inanimate objects. Though whether it’ll be the smash that publishers Bethesda are counting on remains to be seen.

Despite being advertised as the game’s first hour, Prey‘s demo, currently gracing the Xbox One and Playstation 4, is in no way time limited. Instead, it gives you the freedom to explore its opening area, with some connected sections sealed off. Prey was apparently pitched as spiritual sequel to System Shock and, just as System Shock did when it was released back in 1994, it has you roaming around dispatching foes, upgrading your abilities, reading electronic logs and generally trying to figure out what the hell has happened. Prey muddies the waters by having you in communication with two parties, either (or neither) of whom may be telling the truth. 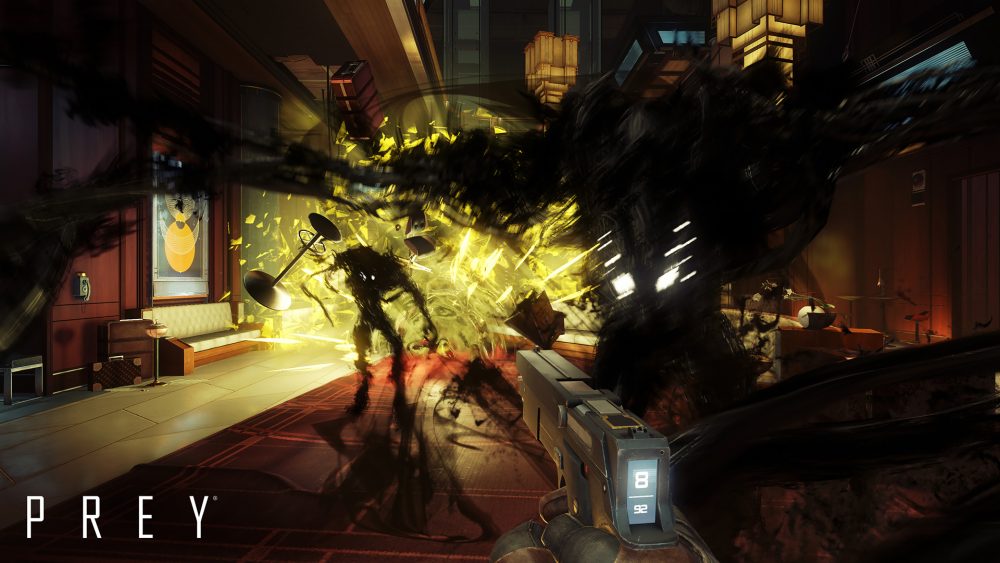 You can expect the full game, which lets you choose the gender of your protagonist, to deliver further twists. Though despite the narrative curveball the game initially threw me, it took a while for Prey to draw me in. The demo area, while channeling design elements from both Bioshock and System Shock, seemed a tad bland. Offices aren’t traditionally terrifying, but the little touches that made those other titles so unsettling and atmospheric, such an enemy presence briefly appearing on a monitor, were notable by their absence.

Once I encountered the Typhon, the demo’s primary antagonists, I started to feel the game a little more. Arkane Studios, the game’s developers, deserve kudos for creating enemies that don’t resemble humans suffocating beneath several layers of latex. The Typhon are utterly alien in their design; strange, angular, shadowy beings that wouldn’t be out of place in an H.P. Lovecraft story. Their skittering spider-like foot soldiers also have the unsettling ability to disguise themselves as a common objects, a talent that will have you on edge.

And that’s to say nothing of their larger brethren who are more than capable of dispatching you at short notice. Once I’d acquired a pistol I wandered back to the area where I’d encountered one of these lanky menaces and waded in, blasting away. Two minutes later I was, once again lying on the floor, having been annihilated by some sort of flaming blast, silently wishing I was the Doom marine. That’s not to say you can’t be a complete bad-ass while playing Prey, only that it’s harder to do so, and there aren’t enough upgrades in the demo to take your character in that direction.

The demo also lets you try your hand at crafting, although in Prey it’s an optional rather than compulsory mechanic. You can gather items and, through the use of a recycling machine, break them down into resources. These can then be used to manufacture bullets and other items. The former proved useful, making it much easier to dispatch the shadow spiders. Though my efforts to cram a corpse (of which there are several littering the demo) into a recycler proved sadly fruitless.

Prey‘s demo features a few stand-out moments. At one point, I spotted a pistol on the ground, having apparently fallen from the hand of a hapless security guard. I’d spent the last ten minutes been awkwardly flailing around trying to hit the shadow spiders with a wrench and was down to 20 points of health. Glad that I’d caught a break, I reached for the gun. Two minutes later, I was lying on the floor, being tea-bagged by the shadow-spider that had masqueraded as the weapon.

The game’s narrative also intrigued me, my mind working overtime as I attempted to second guess where the next plot twist would take me. Were the Typhon really as they seemed? What if both of my contacts were lying? Was I even human? If the demo is anything to go by, Prey‘s full storyline will be anything but predictable. That might not be true of Prey‘s core gameplay, however; while entertaining on the whole, it felt a little too familiar at points. Admittedly, the game was created with System Shock in mind, a game I’ve played to death, but I’m hoping the full game will work a little harder to distinguish itself from its spiritual forebears.

Regardless, I enjoyed the time I spent with Prey, and it definitely has promise. The demo didn’t hook me quite enough that I’ll be rushing out to get it on launch day, but I definitely will be playing the full version at some point. Should you feel the urge to save the world from an arachnophobe’s nightmare, you can pick up Prey when it hits Xbox One, PlayStation 4 and PC on May 5th.