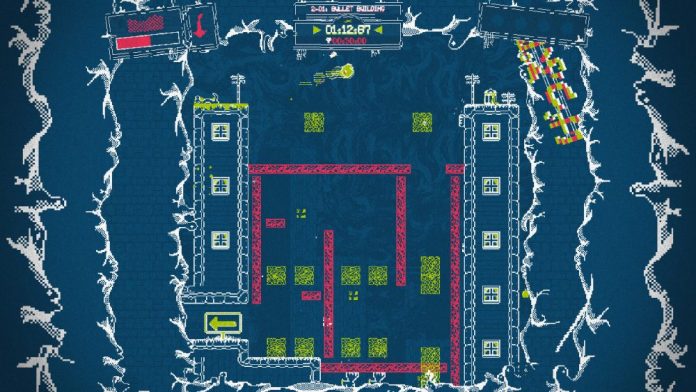 After the successes of their critically acclaimed games Cannon Crasha and Planet Diver, New York developer Fabraz has joined forces with Headup Games to bring us its latest crazy adventure in Slime-san.

Our story follows that of Slime-san; you guessed it, a blob of slime that was minding his own business until he was suddenly gobbled up by an enormous worm. Now deep inside the worm’s belly, Slime-san must work his way through various puzzle levels in order to escape the imminent threat of incoming stomach acid.

The premise itself is reasonably simple, and on the surface Slime-San would have you believe it’s little more than a simple, retro-looking platformer. However, there is much more than meets the eye in this hectic adventure game.

Fun all the way to its core, Slime-san presents a whole world of exciting platform puzzles for you to solve in record speeds. There are 100 levels, made up of 400 rooms, so there is certainly no lack of gameplay to sink your teeth into here. With an estimated 15 hours of single player content, this crazy game just keeps on giving.

First of all, yes, the graphics are “pixelated”, but it gives an incredibly authentic retro feel to the game. Playing it, I couldn’t help but imagine it on an old-fashioned arcade cabinet, all lights flashing with its chiptune soundtrack blaring loudly. In addition, the 5-colour palette and goofy Japanese references are everything you could want from a silly arcade game – and altogether, it’s nothing short of wonderful. 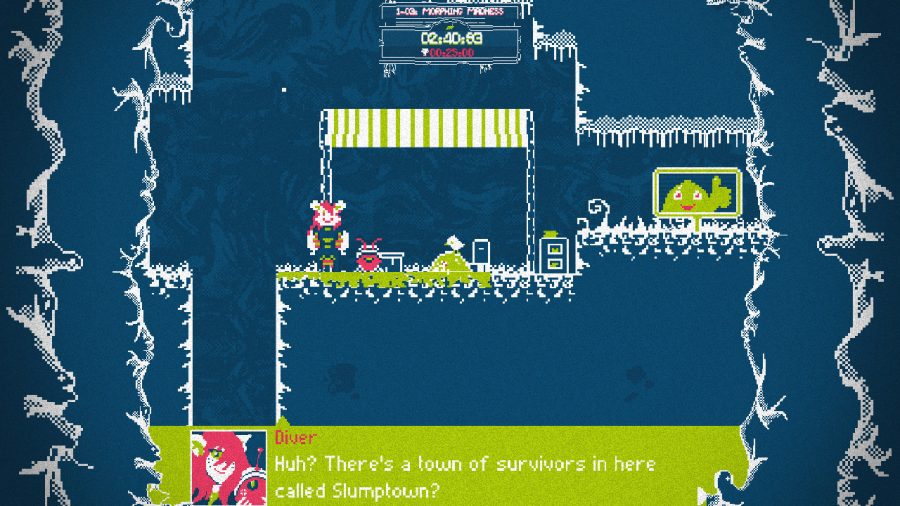 Though Slime-san‘s gameplay is fairly simple at its core, the game offers constant new abilities, such as “morphing” through walls, or dashing in order to speed up time. It’s the sheer speed at which each level forces you to go that is the real challenge; not only are you constantly trying to keep up with learning what and where you are supposed to go, each room is always filling up with stomach acid, and thus each level must be completed as fast as possible. It is this super intense, fast-paced gameplay that gives the game a real uniqueness, and the pressure certainly helps get your heart racing for sure.

Slime-san also offers you the chance to unlock new play styles, outfits, shaders, and mini games by collecting partially eaten apples in each level. As if that wasn’t enough, there is also a “shopping town” full of survivors within the worm, and home to colourful characters and surprising secrets.

While purposefully hectic, Slime-san‘s faced-paced nature is a blessing and a curse. Though incredibly fun, it does offer new players quite a challenge. Because it is such an easy concept to grasp it isn’t impossible to keep up with each room, but it does give players much less of a chance to appreciate what’s going on, the level design, and the little quirks that make the game so unique – there’s simply no time to stop and take it all in. It saddened me a little that I had forgotten a whole room by the time I had moved on because I had to do it in 10 seconds flat. This is great for speed runners and competitors as there are online rankings for level times, but it does mean more casual gamers may feel somewhat alienated.

There is also something to be said about the fact that each room is quick because it is small. There’s not actually a hugely different theme to each one, and many look or feel similar to ones that came before. Though there are 400 levels, gameplay can quickly become repetitive. Sometimes less is more, and in this case, I think that Slime-san may have benefitted from fewer levels, but slightly larger and more intricately designed. 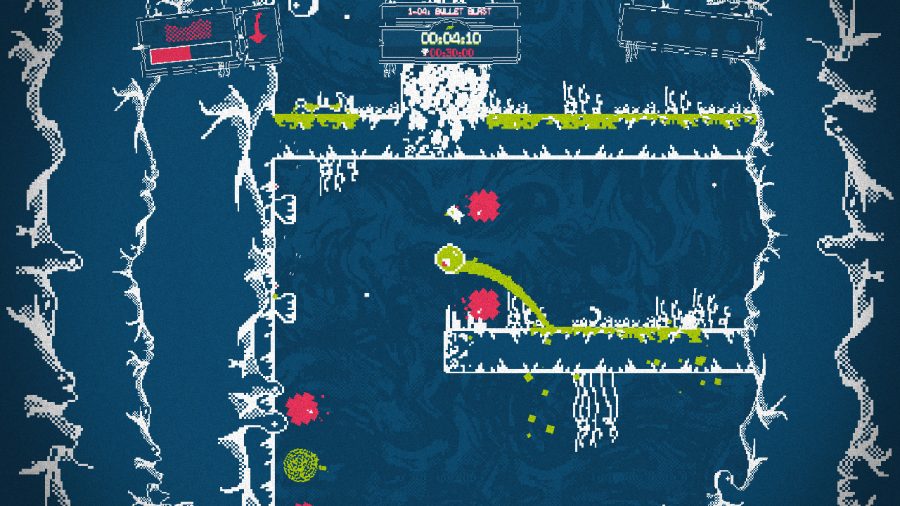 I have to say that from its outward appearance I didn’t expect a huge amount from Slime-san – and with a pretty paltry 900mb, I imagined there really wouldn’t be a lot to it. Despite its few faults however, Slime-san‘s quirkiness, its fast-paced gameplay, the soundtrack from over 10 acclaimed chiptune composers, and the 5 colour palette of a wonderfully vibrant world all culminate in a delightful game. Whether its a quick ten-minute gaming session in your lunch-break or “just one more level” that culminates into an all-nighter, Slime-san is a pleasant surprise all-round.

Slime-san is available on PC.