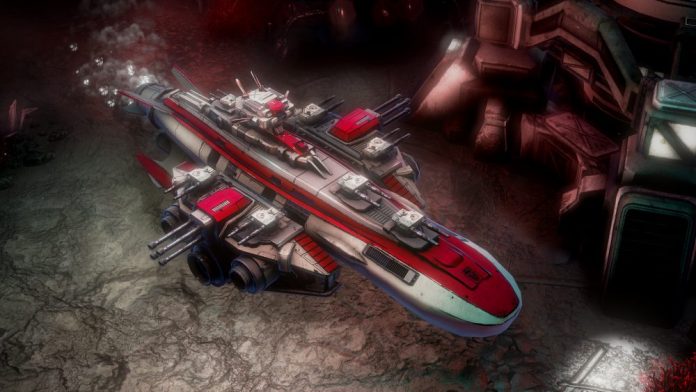 The best way to describe Subsiege would be a mash up between an RTS and a MOBA.

It’s a surreal experience, and one that takes a little getting used to. When I first launched the game I expected to be building bases and sending out raiding parties like a sub-sea Starcraft variant. If you dived straight into a match you’d be forgiven for expecting that you’d soon be sending out throngs of units to pester your opposition, but in reality you end up with a relatively small squad, with the game being fairly simplistic in nature – at least in its current early access state.

In terms of gameplay, it’s hard to make an accurate judgement as with my time with the game so far, I’ve not managed to find a multiplayer match, which is disappointing considering this is a solely online game. All I have to go on is the tutorial (which, by the way, is pretty great at explaining Subsiege‘s core mechanics, despite being voiced by what I hope is a placeholder text-to-speech emulator) and a few bot games. It is certainly reassuring though to read comments about groups of friends who had had a great time playing against one another, in both solo and team matches. 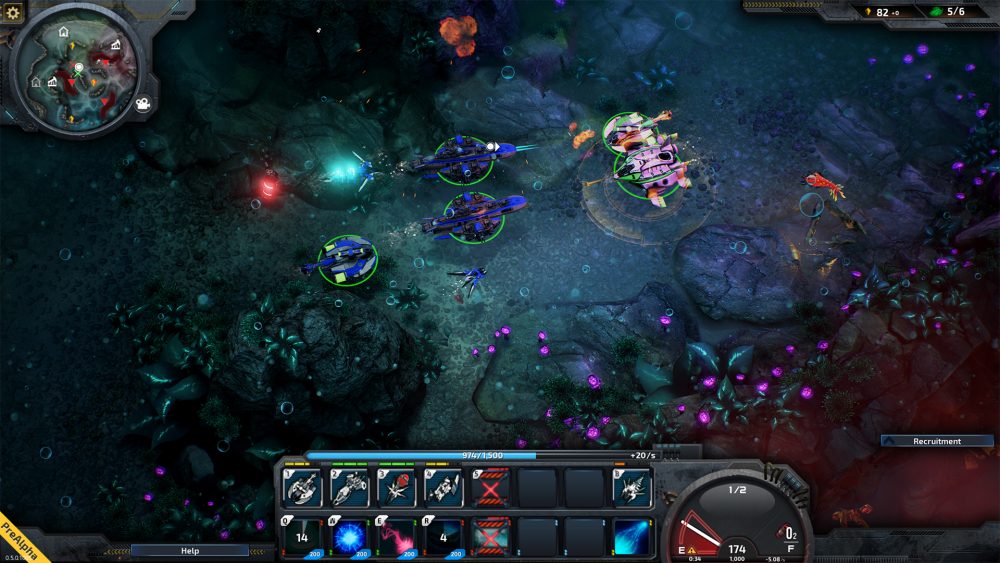 The core principal of each game is essentially to collect resources from nearby respawning gems for basic ships, then upgrade them (or buy more premium ships) after capturing a nearby control rig, which slowly accrues you a more premium gas resource while you control it. You can currently control up to six different ships, each one in the category of damage, protect, disable, or support.

What makes Subsiege matches more challenging however is the addition of the ‘oxygen’ resource. Your oxygen level slowly depletes while you are playing, and can only be replaced by defeating enemies and collecting canisters off the floor. This mechanic changes the game entirely. Instead of sitting in your base until you build up an unstoppable fleet, you are forced to go searching for fights or scavenging for pick-ups; if your oxygen level reaches zero, you straight up lose the game. I personally liked it, as it made the experience a little more intense, but I can see the mechanic not gelling well with some players, especially as you’re not always sure how long it’ll take to reach an opponent. A mistimed trip when you’re close to an empty oxygen tank can mean an early defeat and a bitter taste in your mouth.

Subsiege handles fairly well, but my main gripe was with the pathing. Ask any Dota or League of Legends player and they will tell you how important auto-pathing is in top-down competitive MOBA games, and how tricky it is to get right. On the map there are ‘trenches’ which house a large monster that will instant-kill your ships if they’re caught in a quickly telegraphed radius. More than once I was trying to micromanage my fleet only to find that for some reason half my squad had decided to run right into the trench as it was a quicker route, meaning I lost half of my units. Hopefully it’s something that will be improved upon in a later patch; in its current state, it’s a certain rage-quittable offence.

You mostly control your units in one block, and can cast one ability per ship from a hot-bar, which plays out much like a traditional MOBA. Abilities make a huge difference in fights, but ships don’t start out with them, meaning you have to collect resources and upgrade them back in base. It’s a bit clunky, but does mean you’re much more mobile, ensuring control your gas rigs to upgrade your crew.

The fights were fun, but they’re generally over pretty quickly because of the small squad size. If you lose all of your ships, it’s game over, even if you have resources to make more. Your base is invulnerable, but you can only make more ships if you have at least one left over and sitting in-base. Admittedly that makes fights more intense, but it’s an aspect I don’t like. I could easily see a trend emerging of keeping one ship held back in base (where it is invulnerable) and fighting with a smaller force to regain oxygen, but this feels fairly cheap. An easy fix would be for bases to be targetable, stopping any such cheesy tactics.

Graphically, Subsiege is actually really nice. While the screenshots on Steam were a bit exaggerated compared to what I experienced in-game at max settings, the devs have still managed to nail the underwater aesthetic, with colourful coral and plant life contrasting with the moody blue ocean floor. Abilities also look vibrant when cast, which is important in a competitive multiplayer game – but also just looks plain cool. The sound is also pretty good, though some of the voiced unit lines are a bit disjointed. Each type of ship has its own unique voice lines which add variety, but inevitably some are better performed than others.

Subsiege shows some potential, but I don’t see it becoming the next e-sport. It’s pretty obvious the developers want to see a scene develop for the game, with a league already set up for clans to participate in, but right now, I don’t see much potential for pro play, especially considering the current lack of player-base. I’d like to see more people picking up the game, but until the devs work out the kinks, I doubt they’ll find many sinking into the game, at least at its current £22.99/$29.99 price tag. 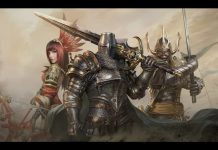