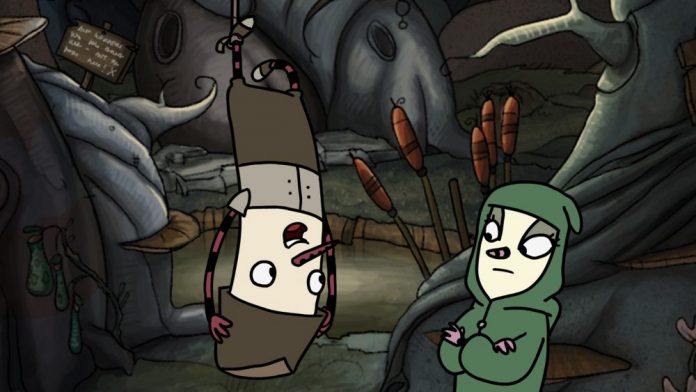 There’s nothing I love more than a good point and click adventure, especially when it’s well made with an interesting world to explore. Throw some humour and some likeable characters in there too, and we’re surely onto a winner.

The Inner World, originally released in 2013 on PC and recently released on Xbox One and PS4, manages to tick all of those boxes. It’s a brilliant little adventure set in a strange and captivating land with a main protagonist you can’t help but adore. It would be a winner, then, if it wasn’t for one pesky detail: its control system on console is pretty horrendous.

We all know that point and click games thrive on a PC where you can play with a mouse and literally point… and click… at things. Still, many have translated well onto console with a few tweaks. The Book of Unwritten Tales 2 came over to Xbox One and PS4 a couple of years ago and employed a simple system that utilised both analogue sticks. It wasn’t quite as intuitive as a mouse, but it worked. Similarly, Broken Sword 5 launched onto console and despite its roots on PC it worked without much complaint. There are plenty of examples where controller input works perfectly in a point and click environment, but The Inner World has seemingly tried to create its own control system that manages to be nothing but clunky and annoying.

Your main character, Robert, can be controlled simply by moving the left analogue stick. He’ll walk in whatever direction you press. So far so good, right? Unfortunately, to interact with an object, you can’t simply walk up to it. You have to press ‘X’ which will highlight all interactive objects in your vicinity, then press the shoulder buttons to cycle through which one you want, then press ‘A’ to see what options are available to you. Of all the console-based point and click games I’ve played, it’s by far the most awkward control scheme. I did get used to it after a while, but it was almost enough to make me not want to play the game, which would have been a massive shame as otherwise, The Inner World is bloody brilliant. 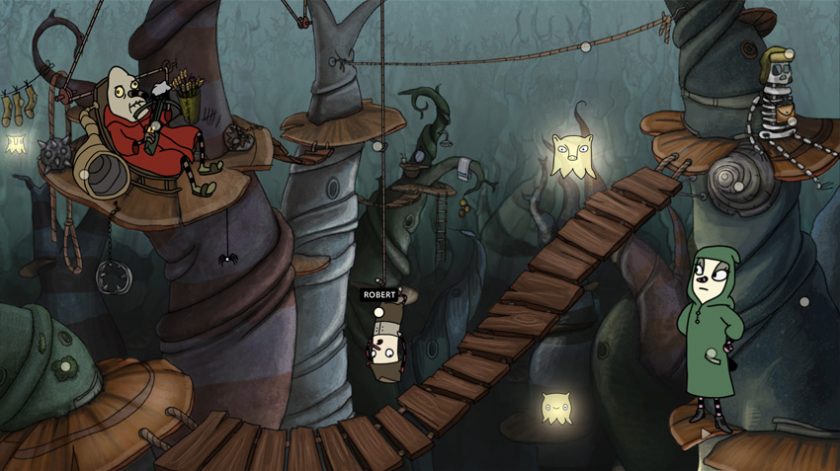 Outside of the control gripes then, let’s get to the good stuff. The Inner World is set within a rich and imaginative narrative. You control Robert, a young man from the strange land of Asposia, which is under threat from an unknown evil. Little does Robert know, the person behind that evil is the man who’s been his caregiver since his parents died when he was a baby. With Asposians being turned to stone left, right and centre by this evil force, it’s up to Robert and his companion Laura to save the world and bring their nation back to normalcy. Pretty standard ‘unlikely hero’ stuff, then.

There’s an awful lot of backstory to The Inner World, and it feels like only some of it is touched upon. It seems a little rushed at times – the game’s six- to eight-hour running time could have been expanded to give us more of a glimpse into the mysterious land of Asposia, but I suppose a narrative that leaves you wanting more is a sign of excellent storytelling. (And it also makes me more keen to play the sequel, The Inner World: The Last Wind Monk, that’s due out this summer.)

The game’s visuals are simply sublime. Locations and characters pop out of the screen thanks to the brilliant hand-drawn art style that single-handedly gives The Inner World a vibrant personality to draw you in. It’s a little rough around the edges, with some elements looking like they’ve been drawn in Microsoft Paint, but I mean that in a good way; it gives the game a charm unlike any other.

The soundtrack is similarly excellent, too. The Inner World‘s original score brings the game to life with big, bold numbers that perfectly set the tone. It’s rare I notice a soundtrack, with music often fading into the background as I concentrate on the game, but here it complements the storytelling brilliantly. Equally well done is the voice acting. Every character is fully voiced, which is a welcome touch in a game of this type. The calibre of acting is top notch, and it’s hard not to like every character you meet as a result… even the ‘bad’ ones! 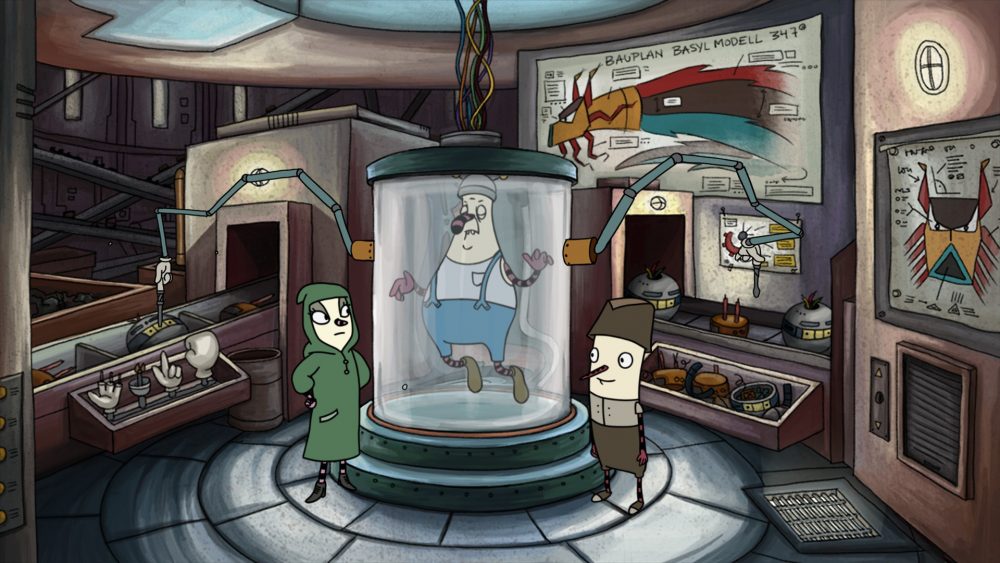 Like all point and click puzzle games though, The Inner World suffers from a rather acute case of Very Obscure Solutions. While some puzzles are pretty straightforward, the further you get in the game, the more obtuse they become, with some solutions seeming so illogical it’s hard to see how anybody would come to it as a natural conclusion. Thankfully, there is a built-in hint guide should you get stuck – and since the game’s been out on PC for a number of years, there are tons of walkthroughs available online. Not that I had to look at any of them. No sir-ee-bob, not me…

Being translated from its original language of German, there are a few bits of sloppy conversion. I had one on-screen prompt pop up that was still in German, and during one cutscene, a poster in the background still read in German – though it switched to English once the cutscene was finished. Of course, it’s nothing that would ruin your experience with the game, but it did break the immersion for me somewhat.

Set in a world and fascinating world brought to life with brilliant visuals, a fantastic soundtrack and wonderfully likeable characters, it’s a shame that The Inner World‘s controls on console are so awkward, as otherwise the game is perhaps one of the best examples of the point and click genre. I’m very glad I got to play it, and I’ll continue to be happy to see point and click games being ported to console, but I just hope more care is taken in creating an intuitive control system. I do heartily recommend The Inner World though – you’d just be better off playing it on PC if you have the option.

The Inner World is available on PC, PS4 and Xbox One. We reviewed the Xbox One version.