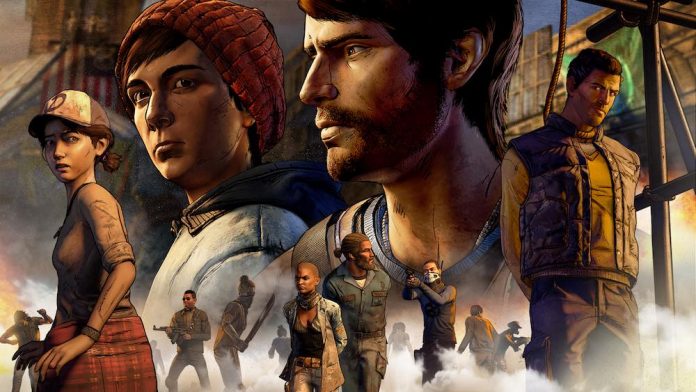 Whenever I finish an episode of a Telltale game I audibly groan in frustration.

This could partly be because I’m so exhausted from gripping my controller with my sweaty palms and not blinking for basically two straight hours, but it could also be because each episode always ends in such a brilliantly clever way that I immediately want to play more.

The Walking Dead is, to this day, my favourite Telltale series, and it’s due to the wonderful storytelling that has never let me down. Episode after episode, Telltale delivers something that is better than the last. The Walking Dead: A New Frontier – Episode 4: Thicker Than Water picks up right where episode 3 left off, after a brief flashback scene between two characters, and every moment from then on is bite-your-nails-to-nubbins good.

In Thicker Than Water you start off as Javi who, along with his brother David, is trying to find a solution to the conflicts with the leaders of The New Frontier. As the episode continues, it becomes more and more obvious that things aren’t quite… right with The New Frontier; as we all well know by now, you can never really be sure who to trust in the apocalypse. Thicker Than Water also provides us with a few flashbacks that give some context to what happened between Javi and David before the outbreak, as well as a little more backstory on what happened to Clementine after the events of season two.

After the first three episodes of The Walking Dead’s new season, you should be familiar with all of the characters and the complicated choices they’ve had to make. Thicker Than Water will have you facing some of the toughest choices you’ve had to make so far this season. Oftentimes, who lives and who dies is be up to you – and as always, you have to live with that choice for the rest of the season.

Along with having to make life-changing decisions, many of the simpler dialogue choices for this episode are equally hard to choose. I often found myself going silent when I didn’t like any of the options. As we’re reminded at the start of every episode, silence is a valid choices, but I found myself wishing there were things to choose from other than the overtly positive choices or the very negative. Sometimes, just being able to shrug or mumble a “I don’t know” would a better choice than awkwardly staring at someone who is yelling at you.

After playing the last episode, Above the Law, my main complaint was the lack of action and combat. Thankfully, Thicker Than Water does have significantly more combat – and perhaps more importantly, the dialogue during the peaceful moments is much better, too Whether it’s an argument between two characters, a loving speech, or a pep talk, each short dialogue exchange between characters is very well done. It’s much less noticeable that you’re in a slower part of the game when the dialogue alone is so captivating and interesting. Of course, that applies mostly to other characters’ interactions, since I felt obligated to stay silent for much of this episode.

As for The Walking Dead’s combat sequences, I’m continuously impressed by how far Telltale has come, especially considering the amount of glitches and lagging in previous titles. During my playthrough of Thicker Than Water, I had two instances of a small amount of lag; I was meant to press my left stick upwards during a QTE, but the response time was very slow so I died a couple of times. The third time worked fine – if I hadn’t died I probably wouldn’t have even taken note, so it’s definitely not a deal-breaking glitch to be sure.

Perhaps the standout moment of this episode for me was a short introduction section that played out in the first few minutes. It featured a series of slow-moving images, some unrelated to the storyline and some directly related – they showed things like the undead knocking their boney hands on a wooden gate, or a member of the town of Richmond hammering a nail. It greatly reminded me of the intro sequence from Tales From the Borderlands, another Telltale series I absolutely loved. This short introduction gives just one moment for you to breathe before the madness begins.

If Telltale continues down this path, the season finale of The New Frontier may be one of their best yet. Sure, it might be too early to call, but the biased fan in me reckons Telltale might just pull it off. Telltale has seriously upped the ante with more action and tougher decisions to make, and Thicker Than Water has definitely been my favourite of the series so far.

In the meantime, I recommend growing your fingernail nubbins back out after you play so they’re easy to chew off again when the finale comes around in (hopefully) a few weeks.

The Walking Dead: The New Frontier is available on PC, Xbox One and PS4. We reviewed the PC version.