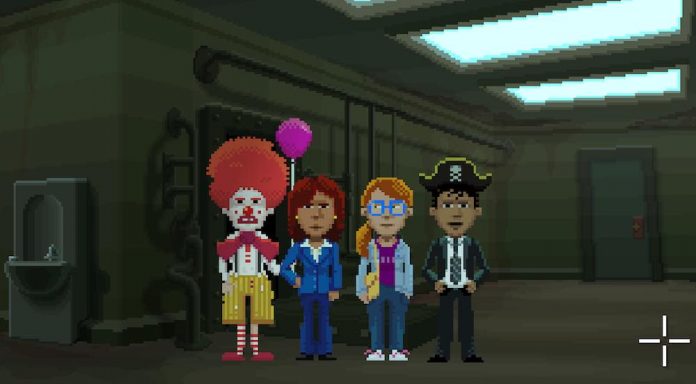 Thimbleweed Park is a glorious return to the golden age of point and click graphical adventures.

Its art is beautiful, its soundtrack entrancing. Its script is, by turns, witty and darkly mysterious, its voice acting superb. It’s a monolithic landmark in gaming history; one of a rare few ‘retro’ titles that not only succeeds but does so with winning aplomb – an attitude of supreme confidence that everything it does is right and good and pure.

But, despite this, Thimbleweed Park does have a few problems.

Anyone who doesn’t already know what Thimbleweed Park is probably isn’t all that into point and click graphical adventure games – or is something of a newcomer to a genre that had its heyday in the late 80’s and early 90’s, but has had a slow-burning resurgence over the last five years or so. And anyone who is into point and click adventure games, in all likelihood, knows what Thimbleweed Park is already.

For those of you not in the know, though, Thimbleweed Park is a successfully Kickstarted game written and designed by Ron Gilbert and Gary Winnick – two gentlemen who, for all intents and purposes, created the point and click graphical adventure genre in the first place with their 1987 release, Maniac Mansion. Even if you’ve not heard of that game, you’re likely to have heard of the Monkey Island games; the first of which, The Secret of Monkey Island, was also created and directed by Gilbert.

Gilbert and Winnick created those games whilst working for LucasArts (then Lucasfilm Games) and helped to define a set of rules that would be followed for all subsequent LucasArts adventures; a rule set that would also be adopted by many other emerging game studios, also keen to put out games in that genre. The key tenets of that philosophy are that there’s no character death, there should be no dead ends (meaning ways in which you trap yourself and are unable to complete the game) and you should never be stuck for something to do. Oh, and you’ve got to put ‘™’ after just about everything (you think I’m joking…). 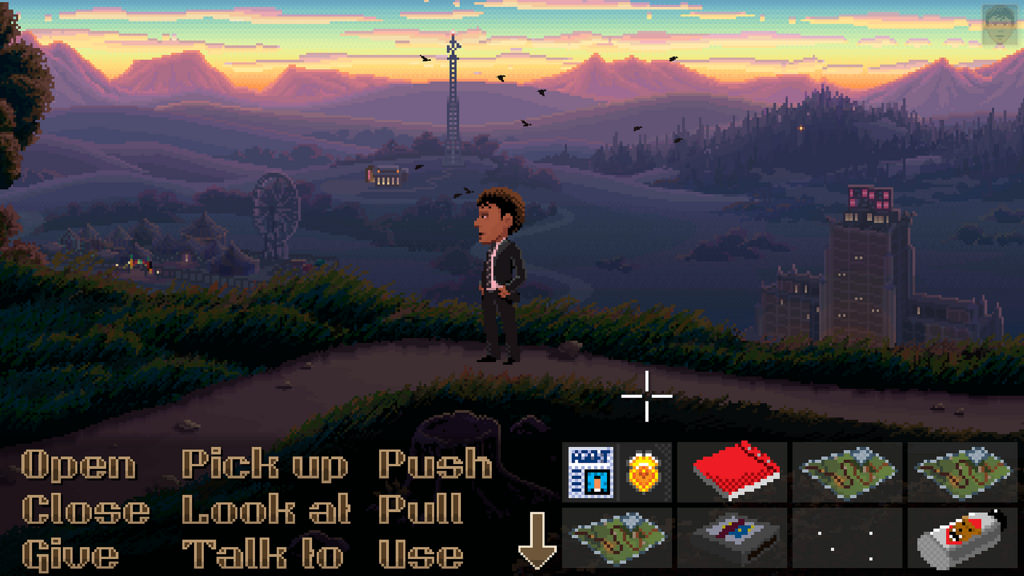 Thimbleweed Park also sees the resurgence of a gameplay device abandoned around the early- to mid-90s: the physical verb list. This is a list of verbs (that’s “doing words” to you and me) from which you’ll be selecting before you can perform any action; things like ‘Pick Up’, ‘Talk To’, ‘Push’ and ‘Give’. The verb list has been shunned for decades but its revival for Thimbleweed Park has opened my eyes, at least, to the possibility that this is yet another puzzle for you to solve in a game genre whose major draw is just that: solving puzzles.

Since we’ve started talking about them, we might as well continue: Thimbleweed Park’s puzzles are, for the most part, brilliant. One problem that has always plagued point and click games is that they have the occasional puzzle, the solution to which, can never be reached by pure logic alone. A classic example is the cat-hair moustache from Gabriel Knight 3 – a puzzle wherein you’re required to pass the protagonist off as another man to pick up a rented motorbike and, to do this, the game requires you to come to the conclusion that using tape to get the hair off a cat and then sticking that to your face will help you impersonate the guy. Oh, but the guy in question doesn’t even have a moustache – you have to draw it on his passport! Bizarre.

Anyway, Thimbleweed Park has almost none of that. While there is a little bit of pixel-hunting (or, more precisely, fumbling about in the bushes with your cursor), the vast majority of the puzzles can be solved by rational, logical thought. Even on those occasions when I got stuck and just started trying random combinations of things before stumbling into the answer, the answer did make sense, if only I’d have been able to see it earlier.

As for puzzle quantity, Thimbleweed Park really plays into the idea that you should never be stuck for something to do. Each of the game’s five playable characters has a to-do list that you can access at any time from their inventory. Completing items will pop a lovely green tick next to them in the list and, if ever a task is shared, everyone will have it in their list. These lists can get quite extensive but, while it can look a little overwhelming, it does mean that you’ve got a constant reminder of what you need to do and, if you get stuck, you can always move on to something else.

Thimbleweed Park‘s puzzles seem, more than any other point and click game, to be directly tied to the plot. At the start you’ll get easier puzzles as the game sets the scene, then a stint with some tougher puzzles to accompany some exposition. Characters are introduced with short, easily solvable sections so you can get to know them and get a nice feeling of accomplishment before being plunged back into the ever widening world of Thimbleweed Park. Right up until the end, the pace drives the rapidity of the puzzles – as the game winds up, they get shorter again (though are still fairly challenging), driving you ever forwards and giving you the distinct feeling of momentum – something I don’t think I’ve ever felt while playing any other point and click adventure game.

The story of Thimbleweed Park takes place in 1987 (yes, the same year Maniac Mansion came out) and involves the murder of a businessman in the titular town, which has been dying a slow death ever since the demise of its entrepreneurial civic leader, Chuck Edmund. You take on the role of several characters: two federal agents, Ray and Reyes, sent to investigate the murder; Chuck’s niece, Delores, a budding video game developer (who makes point and click adventures for MmucusFlem Games); Ransom the Insult Clown (does what it says on the tin), who has been cursed so that he can never remove his makeup; and a ghost, destined to haunt the Edmund Hotel for all eternity. It’s an intriguing plot, steeped in mystery and a creeping darkness that’s often jarringly at odds with the game’s rather lively sense of humour. 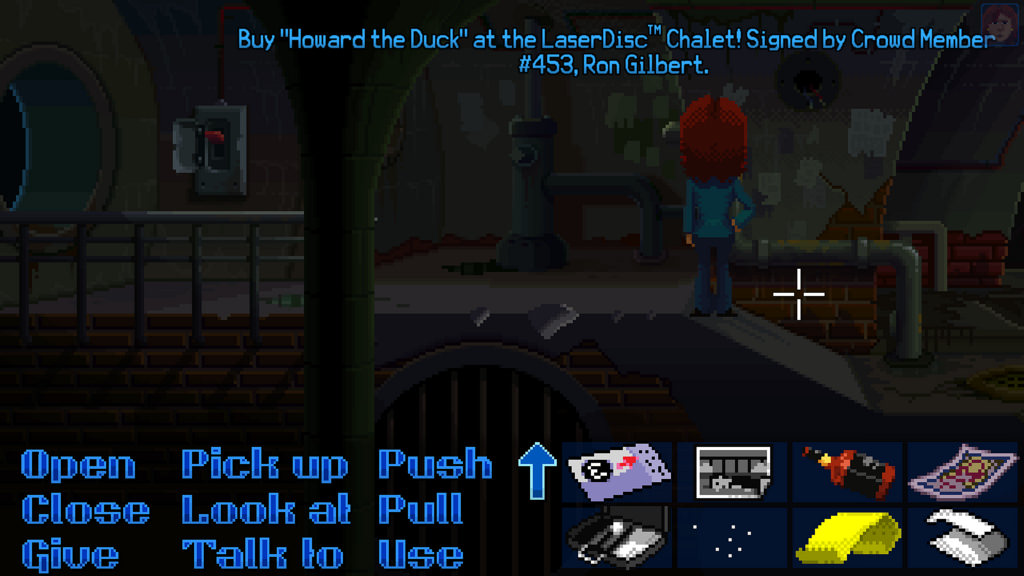 It’s a sense of humour that is absolutely vital to the kind of game Gilbert and Winnick wanted to make, though, and it does provide necessary relief from the eeriness that pervades the rest of the game. Make no mistake, despite its wit, Thimbleweed Park is dark. It’s something not often seen in games of this genre; that horror feeling is usually left more to survival games or, more recently, the famed ‘walking simulators’ and pieces of interactive fiction and it’s the first of those problems I began by mentioning about 1,000 words ago.

Point and click adventure games have become known for the laughs. They’re light-hearted, full of references to popular culture, films and TV, with snappy one-liners, in-jokes, parodies and gags galore. Thimbleweed Park does this and then some; lambasting LucasArts’ rival studios and LucasArts themselves, sending up whole point-and-click tropes and throwing out shoutouts to as many games, films and TV shows (most notably Twin Peaks and The X-Files) as it possibly can in ten to fifteen hours of play-time. But that doesn’t quite fit the tone set by the rest of the game. It sits sort of apart from it – like a jocularly inclined guest at a funeral – butting in now and then to offer up a quip or aside that takes you out of the rather emotionally charged moment you were having and dumps you back into light-hearted point and click adventure land.

Which leads us on to another of Thimbleweed Park’s problems. As I said, Thimbleweed Park is the result of a successful Kickstarter campaign – a campaign built around the idea of the two originators of the genre to produce a new point and click adventure game in the style of the old point and click adventure games. In fact, the game’s feel was meant to evoke the idea that you were playing an as-yet unreleased LucasArts game from the late 80s (just with nicer graphics – which they are, and better sound – which it is). As backers of Thimbleweed Park were, undoubtedly, all fans of the genre, the creators have gone out of their way to give those fans exactly what they wanted, and they’ve not been shy about filling the game with jokes meant for that crowd and that crowd alone.

Now, I’m not saying that you shouldn’t please the people who funded your game, but Thimbleweed Park goes so far in this direction that it’s difficult to recommend it to new players; people who never played those games back in the day or are too young to have encountered them at their height of popularity. It’s a limitation that could have been worked around: a contrivance born of the game’s crowd-funded conception and out of the past of its creators, and it doesn’t really affect or impact the story, either, so there aren’t any excuses except “you wanted it, so we did it”.

None of that is to say that these jokes are bad: they’re not. But the fact that Gilbert and Winnick (together with the rest of the development team at Terrible Toybox) have packed out the game with brilliant opportunities for backers to get recognition (most noticeably in several places you’ll need to visit for puzzle solutions, like the phone book and library) makes the inclusion of a million in-jokes even more lazy and even less forgivable.

But I can forgive it. Because, at the end of the day, all I’ve really complained about in this review is a few jokes. Not even all of the jokes. Not even all of the bad jokes. In my First Impressions video I bemoaned the fact that there were so many self-aware references, so many throwbacks to gags long past but, having played more of the game, I get why they’re there now (and the game being set in the 80s is only the start of it) and their inclusion seems natural, necessary, even.

Thimbleweed Park’s problems all stem from the fact that it’s a Kickstarter game that is not afraid to please its fans. If it’s anything at all, Thimbleweed Park is a brave game. It’s a standalone adventure with no sequel tie-ins. It’s a self-contained story with interesting characters and an intriguing mystery to solve. It’s unafraid to embrace its heritage and it’s not afraid of modernising to improve on the old formula. Possibly bravest of all, though, it’s an old-school point and click graphical adventure game. As a fan, it’s everything you could want it to be; *BLEEP* everybody else.

Thimbleweed Park is available on PC and Xbox One. We reviewed the PC version of the game.