Welcome to another entirely factual and utterly unembellished gaming round-up.

These last few days it’s been hard to distinguish between True News (TM) and the various April Fools stories floating around the internet. Which is why it once again falls to GameSpew to furrow out the absolute truth and discard the damnable lies. So pull up an Officially Licensed Bubsy 3D Beanbag as I relay to you this week’s Totally True Gaming News.

Following on from the release of the Switch and the NES Classic Edition, Nintendo have announced that they will be making a Legend of Zelda Edition Switch unavailable for purchase. Speaking at a press conference Nintendo of America’s president, Reggie Filo-Pastry, explained:

“The Legend of Zelda: Breath of the Wild has become the fastest selling Zelda title ever, with millions of people purchasing the game in the hope that, at some point in the far future, they’ll be able to buy a Switch. We’ve decided to build on this success by putting out a Legend of Zelda Edition Switch, which will be completely unavailable to buy from most games retailers.”

The Legend of Zelda Edition Nintendo Switch will retail for 299 hen’s teeth.

In the wake of his decision to sue Konami over their alleged use of his likeness, Diego Maradona has accepted an offer to appear in Hideo Kojima’s Death Stranding. Kojima has been tight-lipped over the reasoning behind the decision, confirming that the former footballer will indeed appear in the highly-anticipated game, but revealing little else.

It’s rumoured that Maradona will serve as an omnipresent being who oversees Death Stranding’s bizarre and nightmarish world. This wouldn’t be the first time Kojima has employed someone who had a beef with his former employers. He recently revealed that, while Death Stranding’s central character will use The Walking Dead‘s Norman Reedus as a body model, the character will be voiced by noted anti-Konami games critic Jim Sterling.

Activision running out of wars, pinning hopes on post-Brexit conflict

With Activision going back to World War 2 for their next Call of Duty game, the company is now hoping the British exit from the European Union will lead to a exploitable conflict. Our source stated:

“It’s pretty obvious that Activision can’t keep milking the same conflicts, so they’re hoping Brexit will lead to some kind of skirmish. There’s even been talk of putting one of the PR guys in a beret and striped jumper, and getting him to stand in Trafalgar square swearing at Brits. They’ve already trademarked Call of Duty: World War EU.”

Call of Duty: Here We Go Again is out later this year.

“This is definitely not a response to plummeting subscriber numbers. We just felt that we wanted to open Neil’s rich fantasy world up to gamers who otherwise might not experience it,” stated a Funcom spokesman. “In actual fact, our subscriber base has….. look, please, please play our game. Just tell us what you want from us!”

The Secret World: Karting Adventure will let players race as Death, The Sandman, Coraline and a range of other characters from Gaiman’s stories. The late Terry Pratchett will also be available as an unlockable character. There are currently no plans for additional DLC, but those who don’t pre-order risk having Neil Gaiman come round  their house and kick their bins over.

Early in March, fractionally functional space-RPG No Man’s Sky won the Innovation Award at the annual Game Developers Choice Awards. Developers Hello Games weren’t around to collect the award, but have today taken delivery of the first part of the award.

“We were expecting the award to turn up in one piece but when we opened the box, all we found was the wooden base.” explained a Hello Games representative. “We contacted the GDC who explained they’d be delivering the award piecemeal over an undetermined timescale. It’s not quite what we expecting, but we were able to use it stop up Sean Murray’s mouth, so it’s not a complete loss.”

And there you have it. I’ll be back with you next week for more true news. Now if you’ll excuse me, I’ve got a meeting with Activision to sell them my Call of Duty: World War LEGO pitch. 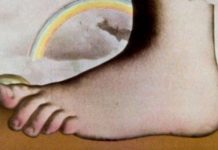