Many of you probably haven’t heard of the Wonder Boy series before now.

It likely flew under your radar for a number of reasons: first, the most recent title in the series released exclusively to Japan back in 1994; and second, aside from compilations released later on, the Wonder Boy series has been exclusive to arcades and Sega consoles. Despite this, French developer Lizardcube has chosen to recreate 1989’s Wonder Boy III: The Dragon’s Trap with painstaking detail, and the end result is something quite remarkable.

This side-scrolling action-adventure platformer begins with Wonder Boy (or Wonder Girl, a welcome addition thanks to Lizardcube) storming the Meka Dragon’s castle, seeking to destroy it. Upon defeating the Meka Dragon, Wonder Boy is cursed, and he is forced to flee the crumbling castle while trapped in the form of a fire-breathing Lizard-Man. This premise sets up the main objective in The Dragon’s Trap: find a way to lift the curse and return to your human form.

Lifting the curse is easier said than done, as you can probably imagine. Throughout the game’s four to six hours, gameplay centres around a main hub village with a plethora of branching pathways to new areas. From the beach and a desert to forests and swamps, areas feel unique and packed with hidden goodies – permanent health boosts, money to buy new equipment, and so on. Areas often follow a linear pathway with small parting sections, where the latter are often inaccessible during your first visit. Not until you unlock new abilities by obtaining new transformations are you able to traverse those new sections, and through clever level design, Wonder Boy manages to develop its interesting settings even further.

Nearing the end of an area leads to an encounter with one of numerous dragon bosses, and with each victory a new form is unlocked. Lizard-Man breathes fire and can walk through lava, the tiny Mouse-Man can cling to special blocks and scurry up walls, Piranha-Man can swim underwater, and Hawk-Man can fly to previously unreachable heights. As mentioned before, unlocking a new transformation acts in the same manner as unlocking a new tool to bypass obstacles, making navigation reminiscent of a Metroidvania. While navigating through areas is typically quite linear, the omission of any kind of map can lead to frustration when backtracking through past areas. It isn’t difficult to mistake one merchant for another, returning to a particular location only to find out that they don’t sell the goods you came for. When backtracking is a noteworthy part of progression throughout the main game, supplementary trips to previous areas should be made simple and painless, and Wonder Boy often struggles on this front. Some instances even leave the player wandering aimlessly, unsure of where to go, and a fortune teller in the village provides subtle hints, though I found many of them to be too vague to be helpful. 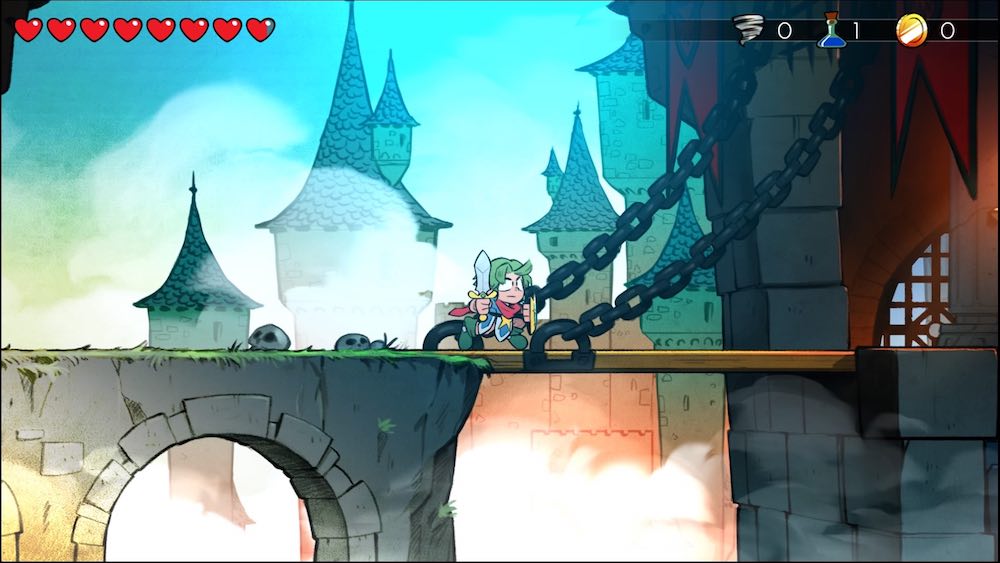 Thankfully, tedium in backtracking is kept to a minimum thanks to strong level design. In many other classic platformers where falling into a pit means dying, gaps in the ground instead serve as gateways to new sections of the map. The expansive nature of each area and the diversity in secrets to uncover makes exploring largely satisfying. Knowing when not to explore too far is also an important aspect of Wonder Boy, as the consistent (but fair) level of challenge is sure to test the mettle of overzealous adventurers.

Much of the difficulty in The Dragon’s Trap comes from its combat, as pressing forward means doing away with droves of enemies. The majority of combat is handled through jumping and attacking with your main weapon, with limited-use sub-weapons available as drops from enemies. These sub-weapons are standard fare – fireball, lightning, and the like – though the boomerang is arguably a bit overpowered. Using it sends the boomerang flying horizontally into an enemy before it flies back to the player. Continue to catch it, and it can be used endlessly, whereas other sub-weapons are only one-time use.

Dying returns you to the village and causes you to lose all sub-weapons in your possession, making it important to pay close attention to your health on a regular basis. Some enemies hit hard, and can result in a surprise death if you aren’t paying attention. Your attack and defence stats are influenced not only by equipment (that can be found or purchased from merchants), but also your current form. Mouse-Man, for example, is relatively weak in combat when compared to Lion-Man. Each weapon and piece of armour also affects each form differently, so monitoring these changes is also essential for survival.

Ensuring that your attacks are lined up to strike your enemies can also be a nuisance at times, as I found that hit boxes can be a bit awkward to line up. Especially with forms that use their swords in a lunging fashion – Mouse-Man and Piranha-Man, in particular – it can occasionally feel more cumbersome than it should to hit a simple foe. This is also evident in boss fights, where the large size of the boss dragons and their relatively small hit box make fights feel more like a battle of endurance and fumbling with the combat than anything regarding skill. Bosses are also disappointingly predictable, which boiled down fights to simply waiting for the right moment to strike. Provided that your equipment is up-to-date, reaching bosses is usually more of a challenge than the fights themselves.

At the same time, it’s hard to be too mad at Wonder Boy: The Dragon’s Trap when it looks and sounds as splendid as it does. Beautiful hand-drawn sceneries and characters flesh out the world in a way that is truly spectacular, breathing life into Monster Land to a degree that few remakes achieve. In addition, a magnificent orchestral score establishes a sense of whimsy and wonder, while also hooking the player in during heated exploration. Developer Lizardcube also opted to allow players to toggle between the remade visuals and soundtrack with that of the original version of the game – through this, the classic version of the game can be played in its entirety. Comparing the original pixelated visuals to the marvellous hand-drawn art shows the incredible level of polish and finesse in The Dragon’s Trap’s presentation, and the game is substantially better because of it. 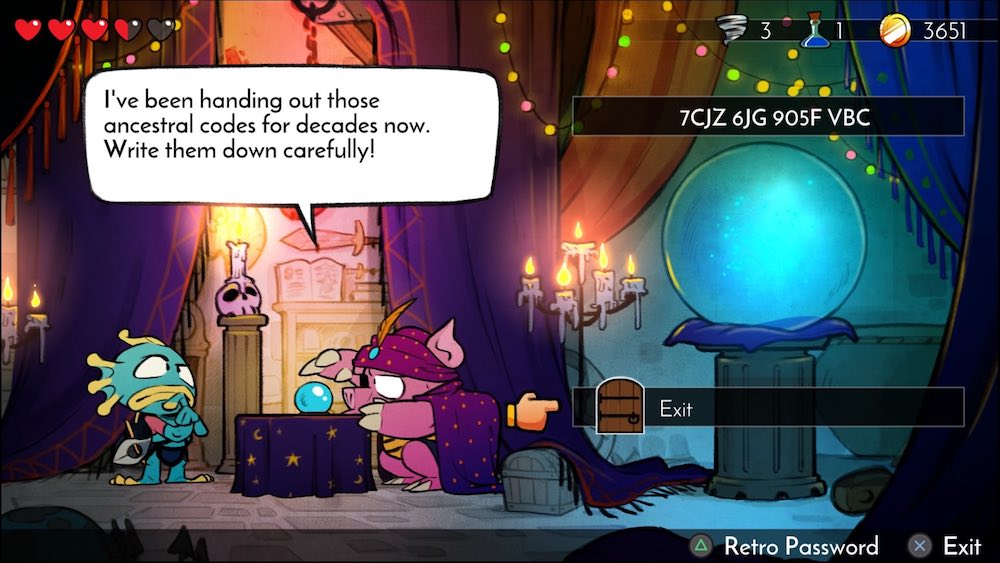 Oddly enough, old-fashioned save passwords from the original version of the game can also be used interchangeably with this new version of the game. Still have your old password in a dusty old instruction manual? It still works here – just input the code and you can reload your progress from decades ago. Lizardcube also introduced a few quality-of-life tweaks, including improved physics and inventory management, as well as the ability to swap between sub-weapons without entering the menu. These changes undoubtedly make the overall package a smoother experience.

Wonder Boy: The Dragon’s Trap sets the bar incredibly high for future recreations of classic games. Not only does it pay reverence to the source material in nearly every conceivable way, it also manages to modernise the original game through an astounding level of quality in presentation. The Dragon’s Trap is gorgeous, charming and challenging, and while some outdated design elements and disappointing bosses are sure to irk players, there’s no denying that it’s still a hell of a lot of fun after all these years.

Wonder Boy: The Dragon’s Trap is available on PC, PS4, Xbox One and Nintendo Switch. We reviewed the PS4 version.