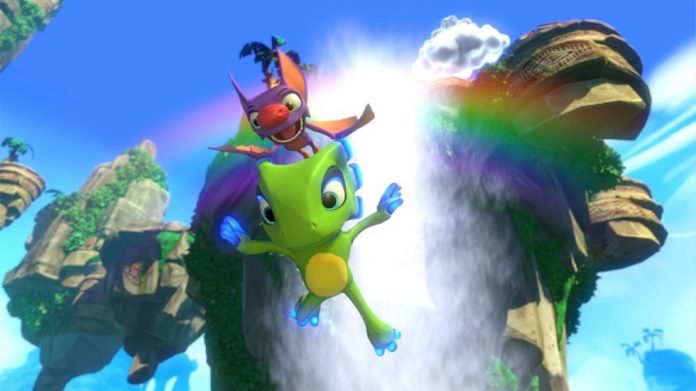 Touted as the spiritual successor to the Banjo-Kazooie series, Playtonic Games’ Yooka-Laylee smashed its Kickstarter goal in May 2015, eventually reaching just over £2,000,000. It was obviously a sign that gamers wanted an experience that harkened back to the golden age of 3D platformers, but will they like what has been delivered?

I’ll be brutally honest: right from the moment I sat down to play Yooka-Laylee, it seemed set to disappoint. After watching the drawn-out introductory cutscene that sets up its non-story, complete with horrendously irritating looped noises to complement its written dialogue, I was thrown into a world that looked fairly nice but just felt sterile and rough around the edges. Still, I trudged along and made my way to the game’s main hub area, hoping that the gameplay would win me over. And for a while, at least, it did.

Yooka-Laylee‘s first world, Tribalstack Tropics, is bright and colourful. It’s also densely packed with things to do. It’s how a 3D platformer should be, offering plenty of explorative action as well as a smattering of side activities and enemies to thwack. Everything you need to do to collect Pagies, the main objective of the game, is challenging but not overly so. Even when the camera decided to do its own weird thing and fight against me, or when the framerate stuttered, or when the controls just felt unwieldy, I saw past it as the old school platforming action was worth the effort. After expanding the world by collecting a number of its Pagies however, and exhausting all the things I could do there, I moved on the next world, and things started to go downhill.

Past the first world, Yooka-Laylee‘s level design just gets progressively worse. The worlds become blander, sparser, more spread out. The enemies within them are never really a threat; just hindrances blocking your path. Once the initial urge to collect every item has subsided, it becomes more and more of a chore to work through each world, and sometimes even finding the next one can become a pain in the backside due to poor signposting. Whilst I found it easy to dismiss infrequent issues such as getting stuck in scenery and going out of bounds in the initial world due to its compact nature and cheerful aesthetic, I found it hard to do the same when playing the game felt more like a dreary slog. 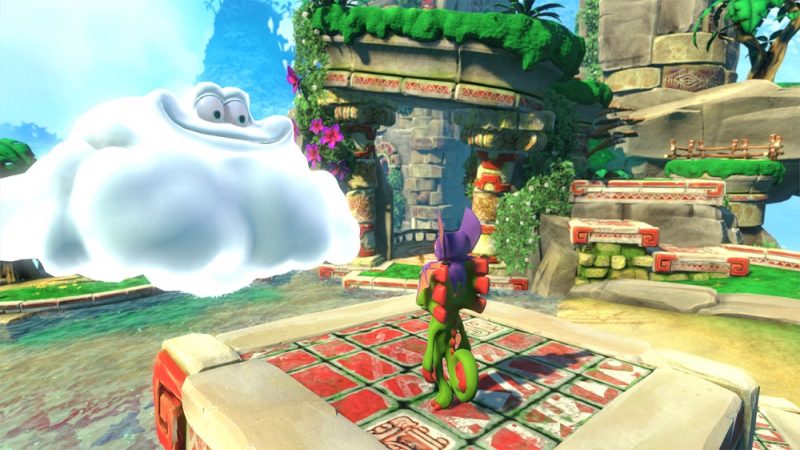 The worst elements of Yooka-Laylee though are the large number of minigames and challenges that you’re forced to play that are simply awful. Don’t get me wrong; there are a large number that are enjoyable (or at least passable), but many are devoid of fun and lack any kind of polish. When you’re roaming the worlds and utilising the skills you’ve obtained from Trowser the Snake, there’s some fun to be found here and there despite the frequently iffy controls, but when faced with one of the many minecarting sections or retro-inspired games, it’s hard to find any redeeming qualities thanks to the awkward mechanics and choppy performance.

Too many times the controls feel like they’re working against you when you spin like Sonic the Hedgehog or make use of Laylee to fly. You’ll frustratingly have to repeat sections of the game again and again until you complete a task under a strict time limit, often feeling like the deciding factor of your success was luck rather than skill. And when you reach the Casino world, you’ll play the same slot machine game repeatedly – as if the designers could think of nothing better to fill the space with.

It’s a shame really, as the titular Yooka and Laylee are likeable characters despite their sometimes snarky dialogue, and when the game simply asks you to do what it does best – explore and navigate platforms – it can feel like good old-fashioned fun. It’s just mired with an excessive amount of unpolished, unnecessary and unpraiseworthy content that pulls the entirety of the package down. It could be forgiven if the most annoying of the minigames and challenges could simply be left to one side, but the large number of Pagies required to complete the game means you’ll have to complete quite a chunk of them.

Yooka-Laylee then, is somewhat of a letdown. If you were expecting a solid 3D platformer true to its 90’s roots, then you may find some enjoyment in it, but you’ll have to work through a myriad of issues that you wouldn’t expect to exist in a modern game. Starting out relatively strong in the grand scheme of things, it unfortunately loses focus and charm as you progress, until you ask yourself why you’re putting yourself through it just to collect quills that become useless and Pagies that simply aren’t worth the frustration. I wanted to like Yooka-Laylee, I really did, but it fought tooth and nail against me at every step, sucking the fun out of what should have been a light-hearted nostalgia trip.

Yooka-Laylee is available on PC, PS4, Xbox One and Switch. We reviewed the Xbox One version.