With David Lynch’s Twin Peaks returning to our screens, we got to thinking about all the games over the years that have obviously been inspired by the cult series.

Twin Peaks‘ influence on games is far reaching, with a handful of titles offering direct references to the series and many others trying to imitate its mysterious atmosphere and kookiness with varying levels of success. So, whether they feature equally quaint rural towns, have a similarly strange cast of characters, or just have the same unsettling dark presence about them, here are 10 games that fans of Twin Peaks will love. 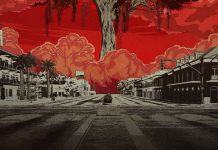