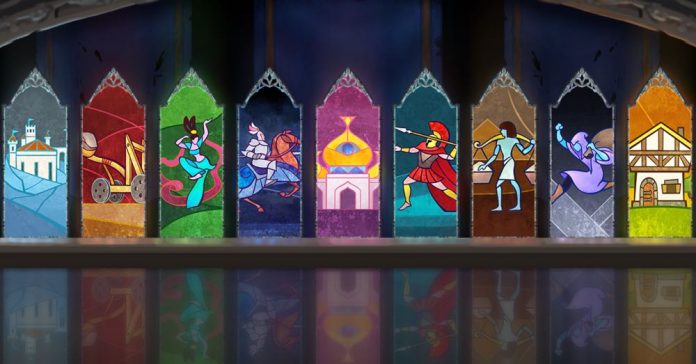 City-building strategy games have a storied history of complexity, offering a plethora of options for players to take over the world or run their burgeoning empire into the ground.

It’s odd then, that Age of Rivals takes away so much control, favouring a scaled back and largely randomised approach to empire-building. Of course, there’s a good reason for this: being a two-player card game with limited scope, simplified gameplay is necessary to keep matches down to a manageable time of around ten minutes.

After choosing a character (referred to as “rivals”), play consists of each player simultaneously picking a card from their own selection of four. The remaining three cards are then swapped between players, and each chooses another card from the new selection to purchase. Then four new cards are dealt, and play continues until each player has eight cards making up their empire. These can be anything from warriors to centres for the arts or even treacherous thieves and bandits; the various resources that can be purchased are all divided into a handful of such categories. Each card costs a certain amount of gold, and running out of gold requires a card selection to be wasted to earn some income. However, this can be eased by purchasing trade goods, which provide discounts on other resources that require the same goods while also taxing the opponent whenever they purchase cards requiring those goods.

Each match takes place over four rounds, with the initial collection of purchasable cards randomly selected from a larger set. At the end of each round, certain purchased cards get carried over to the “purchase pot” for the next, gradually decreasing the randomness in the deck as each round passes. There’s also a “pick and pass” mechanic, in which each player chooses a card before passing the remainder to their opponent to choose from. Each player can see the cards available to the other at all times, which opens up new opportunities for conspiring against the opponent. 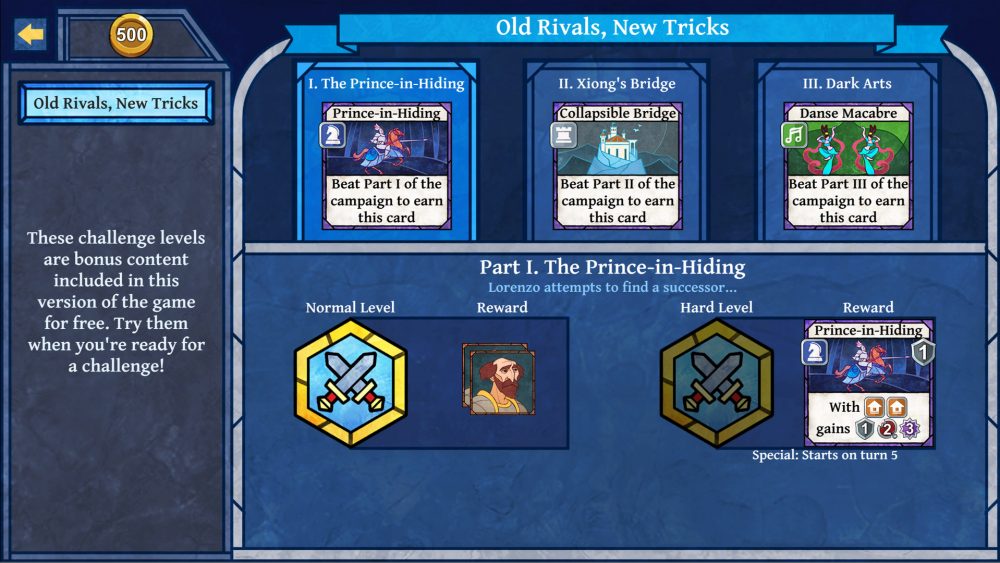 There are countless cards in Age of Rivals, each with various stats and effects; many of the latter only activate if cards of certain other types are owned as well. This encourages strategic variation, as the only way to activate a powerful warrior’s ability may be to purchase a religious temple. However, it also introduces Age of Rivals’ biggest flaw: randomisation.

As mentioned previously, the cards that are used for each game are chosen randomly from the collection that has been unlocked so far. Thus, there are invariably times when certain cards will appear without any cards present to activate their effects. On many occasions, I was forced to waste powerful cards from my deck because that round didn’t include any useful cards of the required type. In other cases, triggering a certain effect can require such a laser-focused approach that by the time the necessary resources are committed, the player has fallen behind in other areas of their society.

Case in point: the armies. Age of Rivals practically requires the creation of a powerful army, as it’s one of the few effective ways to deal damage to the opponent’s civilisation. However, armies rarely have any actual points associated with them, which are, you know, how you win the game. Focusing too heavily on army construction generally just results in a sweep during the “War” phase, in which the rivals pit their armies against each other to seize control of a handful of cities, each of which provide a small point reward to their captor. Then, it’s a matter of crossing one’s fingers and hoping that there’s enough damage on your side to wipe out your opponent’s structures. However, when the opponent is free to distribute the damage however they choose (thankfully, you can do the same), it’s unlikely that any of their key assets will be taken out. They’re then free to rake in all the point rewards from their cultural centres and other such constructs, often more than doubling their score.

This issue carries over into each card type in Age of Rivals. Focus on the arts? You’ll probably run out of money. Only build strong defences? Good luck getting any points in the end. It’s a balancing act, but one that constantly seems stacked against the player. Even unlocking more cards (an arduous task, thanks to their high cost and the low rate of income) is a double-edged sword, as it has the potential to unlock powerful new cards, but also increases the size of the pool that cards are chosen from for each game.  An attempt is made to combat this through “guaranteed cards”; cards that are locked in from the outset and not part of the initial random selection.  These cards are unique to each rival, and extra slots and customisation options can be unlocked later. However, depending on what cards are selected by the game, these can end up being just as useless as anything else. 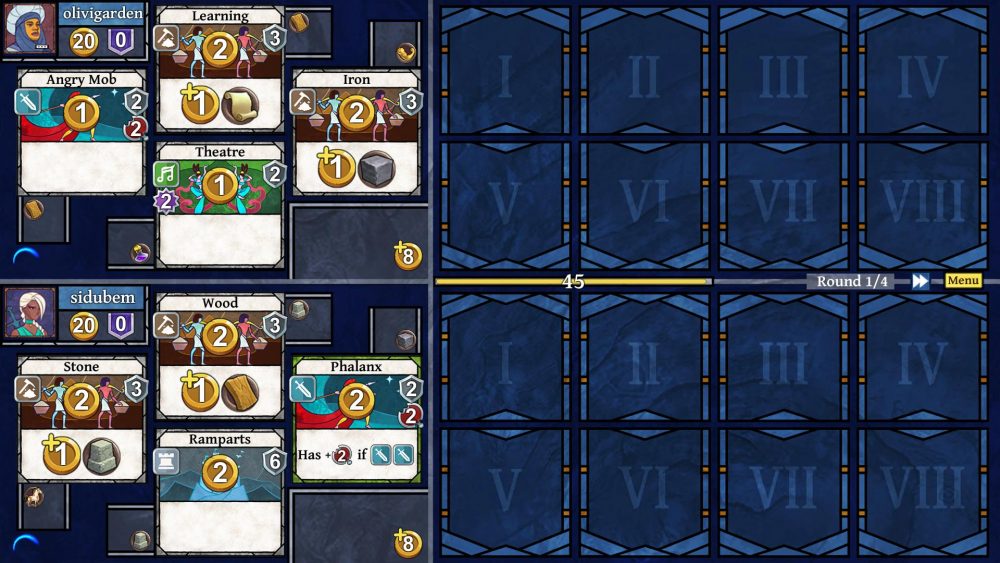 Age of Rivals does manage to shine in its presentation, which features a crisp stained-glass aesthetic that makes its general lack of animations significantly less noticeable. It is a bit of a shame that there isn’t much variation in the card art, though, with cards only really distinguished based on their type. The music is also quite lovely, featuring a handful of tracks that were so enjoyable that their frequent repetition was never a bother.

There’s potential in Age of Rivals. Its quick matches and streamlined gameplay had me hooked after the first game, and it quickly seemed perfect for winding down after a long day. Surprisingly, its online community even seems to be reasonably well-populated; I never had to wait longer than 15-20 seconds to get into a multiplayer game. However, after spending more time with it, the cracks began to show. The reliance on randomness, lack of different game modes, and the tedium of unlocking new cards all generated little incentive for continued play. In short bursts, it could be a fun diversion, but in the annals of history, Age of Rivals may be a short-lived one.

Age of Rivals is available on PC.