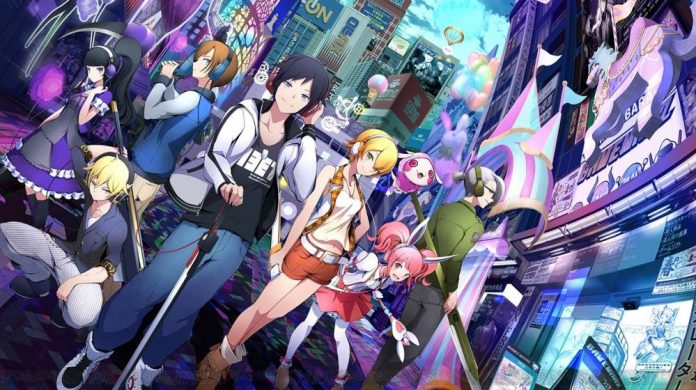 The fantasy that Akiba’s Beat promises is undoubtedly an enticing one.

A JRPG taking place in Tokyo’s wildly popular Akihabara district, it seems like a dream come true for any fan of Japanese Otaku culture. Unfortunately, Akiba’s Beat is unable to satisfy on much of its lofty ambitions, ultimately becoming nothing more than just another small step forward for the series.

The follow-up to Akiba’s Trip: Undead and Undressed, returning players may be surprised to find that Akiba’s Beat shares very little with its predecessor. Opting for a more serious approach this time around, you won’t find any of the series’ infamous ‘stripping’ mechanics here. Instead, Akiba’s Beat reimagines much of the core concepts of previous games by reproaching them from a new angle. Taking inspirations from the Persona series, developer Acquire have dropped most of the supernatural elements in favour of a more fantastical setting.

Caught in a groundhog-day-like time loop, you take control of Asahi Tachibana and his friends as they continually run into strange happenings that only they can see. People’s greatest desires  – or, as the game calls them, ‘delusions’ – have begun to physically manifest themselves across Akihabara in the form of ‘delusionscapes’, blurring the lines between reality and fantasy. Akiba’s Beat proposes the notion that reality itself is at risk, but never fully justifies the actions you and your party take throughout the game until the introduction of a mysterious being that doesn’t happen until many hours in. There is an interesting ethical discussion to be had if you read in between the lines, but Akiba’s Beat seems uninterested in having them, instead choosing to sidestep them altogether.

For the first couple of hours, it may be difficult to keep up with the game’s overly complicated explanation of the plot. It’s not that it’s hard to get a grasp of what’s going on, but rather, it’s the “why” that’s so hard to understand. For a giant portion of its story, it leaves many blatant questions unanswered. By simply chalking it up to the overarching mystery of Akiba’s Beat, it’s as if it’s begging us to trust them, that in the end it will all make sense. However, by not giving a bread-crumb trail to follow it’s easy to become detached with the game’s main narrative. You eventually fall into a rhythm of exploring Akihabara, pursuing side-quests, and finding the next random ‘delusionscape’ of the story. It quickly feels monotonous performing the same activities for hours on end with little to keep you invested other than seeing the characters of the game themselves interacting with one another. 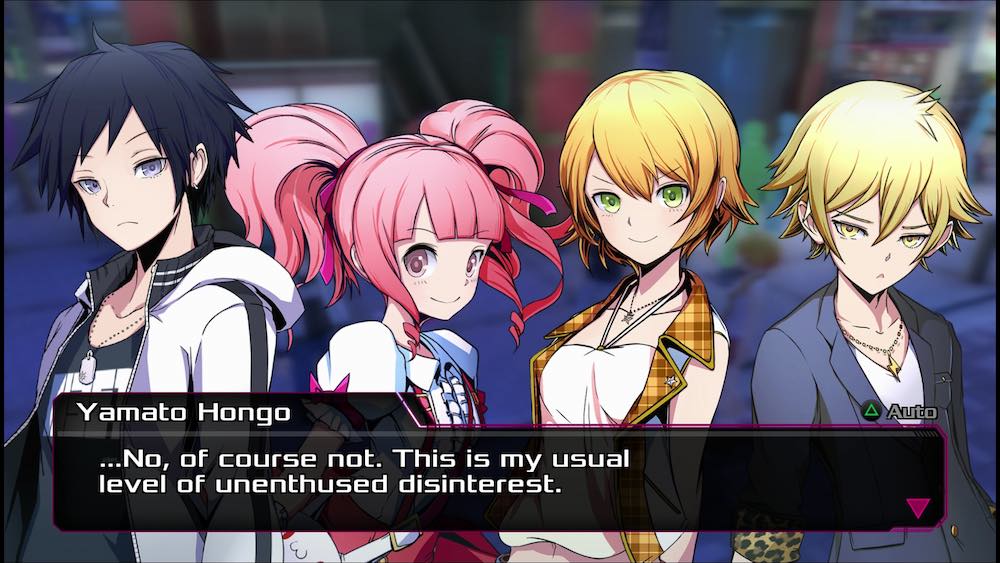 For the most part, Akiba’s Beat’s colourful cast of characters can carry the weight of the game quite well. Since so much of the game is spent reading or listening to everyone talk, the dynamics between the diverse range of characters is usually entertaining on its own. If taken as a whole, the cast of Akiba’s Beat is made up characters that talk to each other like real friends would. Interrupting one another, telling inside jokes, berating each other’s quirks; there’s a lot of fun interactions to be had between them. However, when taken on their own, they can seem one-dimensional; sometimes, downright annoying.

The main character, for instance, is a particular example. Affectionately referred to as a ‘NEET’ (Not in Education, Employment, or Training), he is little more than an exaggerated stereotype. With the ‘NEET’ acronym proudly emblazoned across his shirt, Akiba’s Beat doesn’t do much to inform you on who Asahi is outside of simply reinforcing the fact that he’s lazy, nerdy, and unreliable. The same thing happens with almost every other character in the game. While some may have moments of intrigue during their introductions and sub-plots, at a certain point nearly every character feels one-note. It’s only when they are together as a group that they ever feel interesting on any level, which Akiba’s Beat thankfully doesn’t stray away from very often.

While most of the game is spent talking to different people, like any RPG, there are tons of dungeons to explore. Taking the form of the aforementioned ‘delusionscapes’, each dungeon is thematically linked to their owner’s deepest desires. You’ll explore one that looks like an audio electronics store while another will have you running through an edgy Shonen-style anime. Each dungeon feels unique visually, however the same cannot be said for their design. Usually made up of floating platforms and walkways, ‘delusionscapes’ are oddly geometric, as if they were drawn on graph paper. Occasionally containing small puzzles that feel more like roadblocks than anything clever, there is little to keep your attention as you make your way through some of the game’s many dungeons other than the fighting system alone.

Luckily, Akiba’s Beat’s fighting system is able to lift a bit of this burden. Reminiscent of the Tales series, the fighting system in Akiba’s Beat is fast-paced and action-heavy. Taking place in an open 3D arena, you are locked into a 2D plane as you target specific enemies. However, clicking down on L1 will give you 360 degrees of freedom. While movement is clunky and awkward outside of combat, Akiba’s Beat’s fighting system is able to make it work. As enemies crowd around you, you’re often forced to manoeuvre around the arena, juggling long and short range attacks whenever possible. With the ability to switch between party members on the fly as well as call in support via the new ‘Maid System’, there’s a surprising amount of depth here. Yet, perhaps the most enjoyable aspect is the new ‘Imagine Mode’, which unlocks after filling your Imagine Gauge, allowing you to relentlessly attack enemies to the back-beat of a catchy predetermined J-Pop tune. 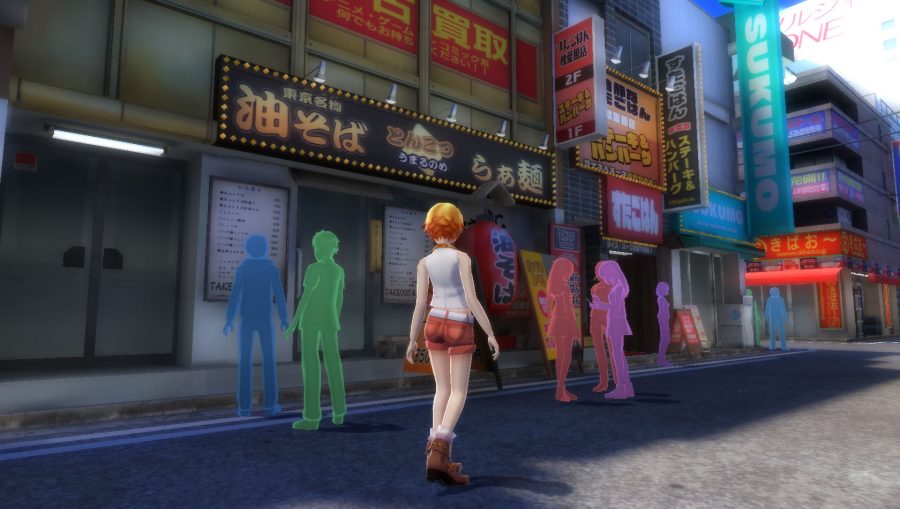 For what it’s worth, Akiba’s Beat does something unique. In a medium filled with passionate fans of Japanese culture, it’s odd that we don’t see more games of its type: games that celebrate the lifestyles that so many of us have chosen. It is so unfortunate then that Akiba’s Beat is unable to truly satisfy on any of those levels.

Its recreation of Akihabara is, while geographically accurate, a scaled back version of what the very series has done before in previous outings. While buildings feel recognisable, like the large red Sega arcades that dot the electric district’s streets, they are little more than window-dressing that mask an otherwise hollow experience. Without the ability to interact with anything in Akihabara or the freedom to explore it, Akiba’s Beat robs you of what could have been its strongest aspect. There’s no stores to look through or side shops to probe. No wandering cosplayers to see or conventions to attend. Akiba’s Beat populates its streets with differently-coloured faceless mannequins that remain stationary, making it feel like a ghost town. Akiba Beat’s biggest failure is, undoubtedly, its disconnect with what makes Akihabara so enticing. It is missing the heart of what you’d expect a game of its kind to have. While it may explore the culture of Akihabara at times via dialogue discussions and story moments, if you’re looking for a way to experience the wonders of Akihabara, the game named after the very district has nothing to offer you.

As stylish and entertaining as Akiba’s Beat can be, it ultimately never feels more than a disappointment. The foundation here is interesting, which is why I hope to see the series follow its current trajectory and continue to work within the mould Akiba’s Beat has developed. It’s clear that tackling a JRPG of this scale is a more monumental task than the action games that were Akiba’s Trip 1 and 2. Maybe in the future we’ll receive a game that’s worthy of the title Akiba, but for now Akiba’s Beat is definitely not it.

Akiba’s Beat is available on PS4.