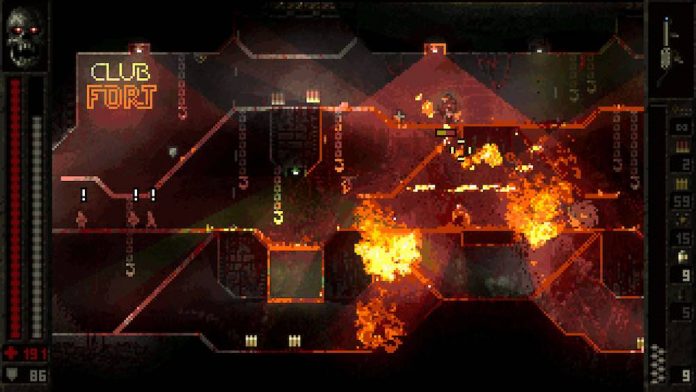 Retro-themed blaster Butcher brings on the blood but gore and grue can only carry it so far, resulting in a game that’s best experienced in small doses.

Butcher, as you might have insinuated from its title, is not a game about pet grooming, nor is it the EastEnders RPG that the world so sorely needs. Instead, it’s a retro-styled 2D shoot-’em-up that has you slaughtering your way across 20 levels in an effort to exterminate humanity. At least, that’s the tale relayed on the game’s store page; in truth, the game is as sparsely narrated as the old-school shoot-’em-ups it seeks to ape.

While Butcher piles on the gore, the first thing you notice isn’t the over-abundance of claret, but just how tiny your character, the titular Butcher, is. This, in theory, allows the game to throw much larger enemies at you without the need to zoom the screen out. Yet in Butcher’s case the enemies you’re fighting are, with a few exceptions, equally as diminutive. This puts you at a distinct disadvantage; the game’s muted and muddy tones meaning that you’ll sometimes be hard-pressed to pick out your foes and even your own character.

One way to alleviate this issue is to keep moving, a tactic which becomes increasingly essential as the game progresses. This is particularly true during the periodic sections where you’re locked in and required to dispatch multiple respawning foes before moving on. Maintaining momentum is the key to survival, not unlike 2016’s DOOM. Stay still and you’ll get swamped; you’ll also miss out on the ammo and health pick-ups that spring from the corpses of your fallen foes. Though given the sheer volume of viscera that ends up being scattered around, it’s surprising your gun doesn’t get clogged with gore.

You’ll spend the first few levels gleefully blasting your way through the hordes of oncoming enemies, painting the platforms with their pixelated organs. Accompanied by a pounding rock soundtrack, enemies assault you with little concern for their own well-being. There’s no denying that the game has gore down to pat; Butcher‘s enemies splattering satisfyingly as you dispatch them, their corpses catching on platforms, chains and anything else in their path. Clive Barker would be proud. Should you choose to tackle Butcher‘s harder difficulty levels, many of the in-game deaths will be your own, but you’ll pick yourself up, wipe down your shotgun and head back in. And finally, having slaughtered your way through the end of the game’s first area, heart pumping, you’ll be ready for a showdown with the end-of-level boss. Except… that never happens. 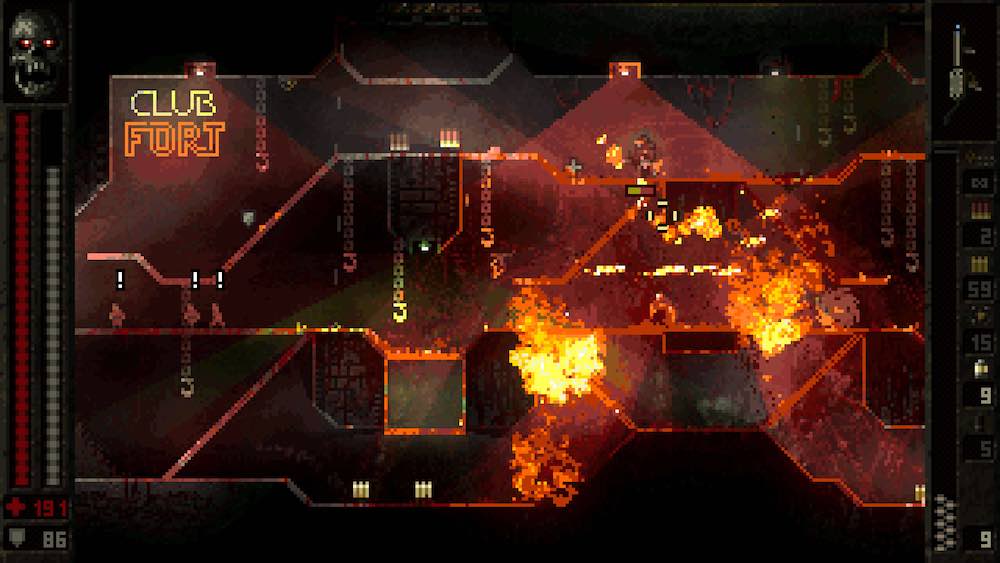 Butcher is a love-letter to old-school shoot-’em-ups so it seems odd that the game largely ignores one of the biggest shoot-’em-up conventions: the boss monster. I’m firmly against just shoehorning bosses into games, but Butcher is sorely in need of something to break up the tedium. Instead, there’s only one boss, found at the end of the game. Entertaining as Butcher’s opening levels are, the game starts to become repetitive. Despite the introduction of new weapons including a flamethrower and plasma cannon, it often feels as if you’re replaying a redecorated version of the same level. You leap around a few platforms, slam a button, clamber through the door that’s just opened, slaughter a few more enemies and then rinse and repeat. Your enthusiasm wanes and you’re left not eagerly anticipating the next level, but wishing humanity would die all the sooner so you could put an end to the whole rigmarole.

The one new feature that’s introduced as you slaughter your way through the game is an irritation that borders on the sadistic. Every so often you’ll find yourself forced to outrace lava or some equally toxic substance; failure to escape the flow results in your demise. This mechanic’s crowning stupidity occurs when you’re tasked with pushing three buttons in the correct order, using experimentation to determine the correct sequence. Fail to get this sequence on the first or second go and you’re dispatched by the rising lava flow. The lack of a lives system means that you’re frustratingly returned to the beginning of the level, no matter how many enemies you’ve slaughtered.

To be frank, Butcher is a game that’s best enjoyed in small doses. This grim, pixellated gorefest successfully channels the spirit of 8 and 16 bit shoot-’em-ups but doesn’t stand up to sustained play; spend too long with it in one sitting and it starts feeling like an infuriating grind. Yet dip into it a level or two at a time – the earlier levels in particular – and you’ve got yourself an enjoyable, fast paced chunk of old-school shoot-em-up action. Butcher isn’t the best at what it does, but if you’re prepared to ration your time with it, it’s worth a look.

Butcher is available on Xbox One and PS4. We reviewed the PS4 version.