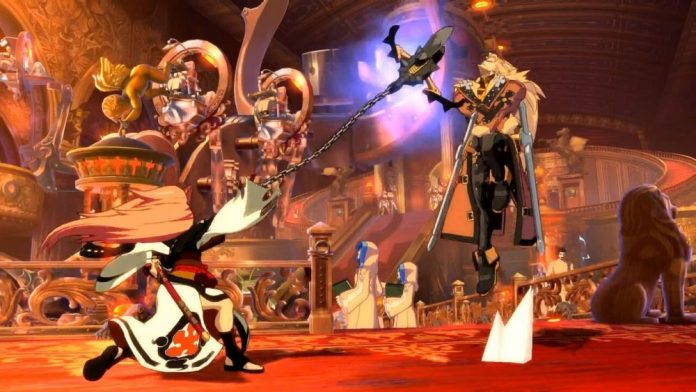 If you’ve never obliterated someone with the power of rock while wearing the sorting hat from Harry Potter, then Guilty Gear Xrd REV 2 is the perfect in-road to a world of heavy-metal fisticuffs.

If Mortal Kombat is Street Fighter’s goth brother, then Guilty Gear is its attractive yet manic metal-head cousin who, high on Red Bull, insists on regaling you with her Final Fantasy/KISS crossover fan-fiction. But however marginally deranged as Guilty Gear Xrd REV 2 may be, I don’t care. I got to annihilate my foes as as guitar-wielding sentient-hat-wearing witch, kicked bottom as a robotic bed and laughed like an imbecile at a character named “Kum”. What more could you ask for?

Guilty Gear Xrd REV 2 (thus named because it’s an updated version of Guilty Gear Xrd Revelator) is, on the surface, a ludicrous game. Its roster of twenty-five fighters includes a girl with ghosts on her shoulders, a mad doctor who wears a paper bag on his head, a five year-old who resembles a teenager, a hipster vampire, an assassin with prehensile hair and other misfits. Oh, and the amusingly named Kum Haehyun? “He” is actually a young girl in a cyborg old man suit.

For a game that comes off as a bit of a joke, Guilty Gear Xrd REV 2 is a highly accomplished brawler. The game couples precise controls with a fighting system that rewards expert players yet is still accessible to newcomers. One of the first things you’ll notice about Guilty Gear Xrd REV 2, apart from its heavy metal aesthetic, is that when you choose a character, you’re presented with the choice of “Technical” or “Stylish” fighting modes. 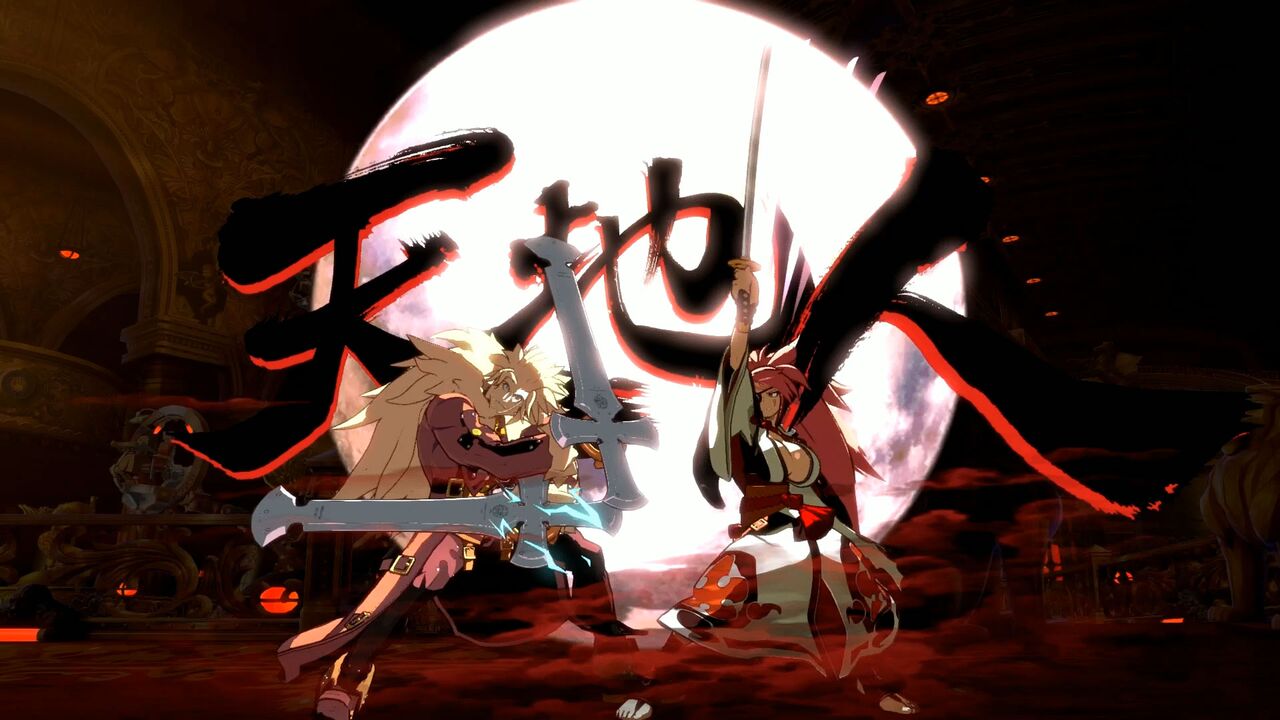 The former is the traditional beat-em-up mode where you pull off special moves by executing a variety of elaborate joystick movements. Stylish mode, on the other hand, allows you to initiate one of your high-powered attacks by pressing R1 and holding down a direction. Pro fighters (the Guilty Gear series being a regular fixture at fighting tournaments) might balk at this apparent shortcut. But if you’re a newcomer to the series, or indeed to fighting games as a whole, you’ll be glad of it.

As a casual fighting game fan, I found Stylish mode upped the game’s pace and made battles all the more frenetic. But anyone planning on using Stylish mode to steamroller human opponents will be sorely disappointed. Mastering the game’s technical nuances gives you a greater degree of control over your character, such as the ability to pull out of lengthier special moves or quickly recover from attacks, so technical players will have the advantage. Guilty Gear Xrd REV 2 is a game that rewards dexterity though it’s by no means required.

None of the characters are obviously overbalanced though they all have their own distinct fighting style. Given the size of the game’s roster, it’s impressive that Xrd REV 2 manages to avoid the Ryu/Akuma/Ken trope, none of the characters sharing near identical move patterns. The game’s tutorials do a superb and lively job of introducing not only the game’s basic concepts but also more advanced fighting features.

Also impressive is how eye-pleasing Guilty Gear Xrd REV 2 is, so much so that you risk getting distracted by the game’s looks. Its characters were, at one point, drawn entirely by hand. But now the game is rendered in 3D (though combat still takes place on a 2D plane) and while series veterans might miss the hand-drawn look, combat is still a beautiful, brutal ballet. Every character is fluidly animated, more so than in Street Fighter IV or its ilk; there are even moments when you could almost be watching an animated movie; particularly given the over the top nature of some of the special moves.

Xrd REV 2 does have its quirks, one of which is the inclusion of instant-kill moves. If these are correctly executed, they require you to change fighting stance and can be interrupted, they dispatch your foe in one go. I managed to use one such move to beat a few computer-controlled opponents, playing at the game’s higher difficulty level. I’d question the wisdom of including a move which, in essence, can end the match at any time. 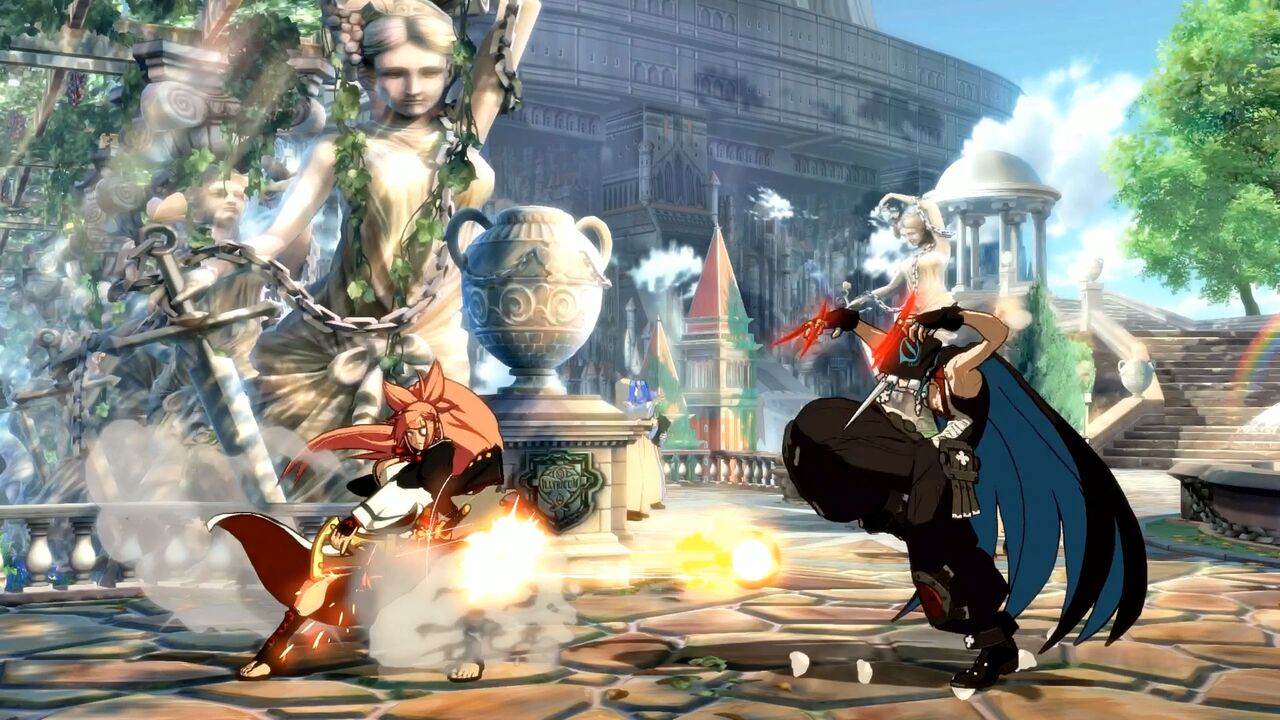 Equally odd is the game’s “story mode” which you’d expect to be a series of battles interspersed with animated sequences. In fact, it’s nothing but a two hour plus animated movie, using the game’s engine. Actual in-game combat including online fights is accessed through the “battles” menu. Given that you need to have played previous games in order to get the game’s story, which is convoluted at best, it seems a bit of waste.

Easy to play but far harder to master, this game’s cast of ridiculous characters, improbable moves, heavy rock soundtrack and accessible fight mechanics will keep you engaged and challenged. Guilty Gear Xrd REV 2 is an excellent brawler which deserves your attention.