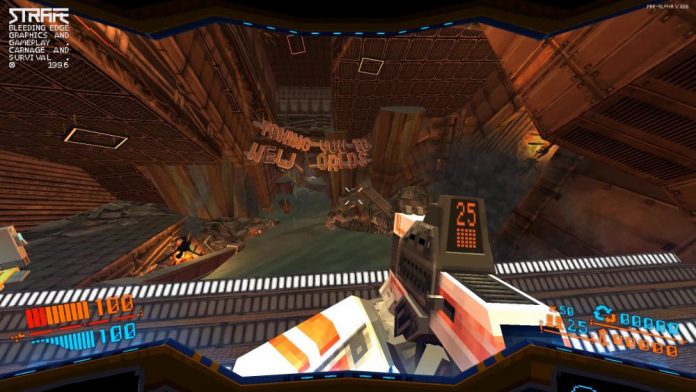 At first glance, Strafe looks like a radical revival of 90’s first-person shooters.

Yet, it doesn’t take long for that impression to fade away, revealing a devilishly difficult game that puts a higher emphasis on its rogue-like elements than its nostalgic-laden design.

Wearing its inspirations on its sleeve, Strafe attempts to pay homage to the genre’s most famous progenitors like Wolfenstein, Doom, and Quake. While each of those titles are fresh in our minds thanks to recent reinventions of their respective series, Strafe keeps things old school. With a retro aesthetic and bare-bones approach to its base mechanics, you won’t find any killstreaks or card-packs here. Instead, Strafe combines ideas from Spelunky and the likes of its historic FPS-inspired roots to create something new. That very notion of a rogue-like infused first-person-shooter is intriguing on paper. However, it’s in practice that Strafe’s core premise begins to fall apart.

Each stage is procedurally generated which means enemy placements, level structures, and upgrade locations change from playthrough to playthrough. Yet Strafe demands you to constantly be on the run, as enemies swarm you without hesitation. Sometimes clearly visible and other times spawning in hidden rooms, the entire game is unpredictable. Since it relies so heavily on its pacing, the game seems to constantly push you towards certain doom without ever giving you a chance to figure out what’s going on. What kills you won’t often matter because the next playthrough will be a different roll of the dice. You don’t ever learn from death, you just experience it. Over and over and over.

It doesn’t help that movement also feels floaty and imprecise. The space scavenger that you take control of runs as you’d expect him to, reminiscent of Doom-guy’s perilous speed. However, wherein Doom gave you manageable amounts of enemies to take on from room to room, Strafe throws as much as possible at you as early as it can. It’s an anxiety-ridden roller coaster that never lets up, especially since your life depletes so quickly. There isn’t any respite from danger either, save for the level’s ending status rooms where you can information like how many headshots you scored or gallons of blood you’ve spilt. While each level may vary each time you play it, the experience almost always dwindles down to you running at breakneck speeds in attempt to avoid the constant onslaught of enemies as well as level’s variable randomness. Death comes for you in many forms in Strafe, but more often than not it will be in unfair and aggravating. 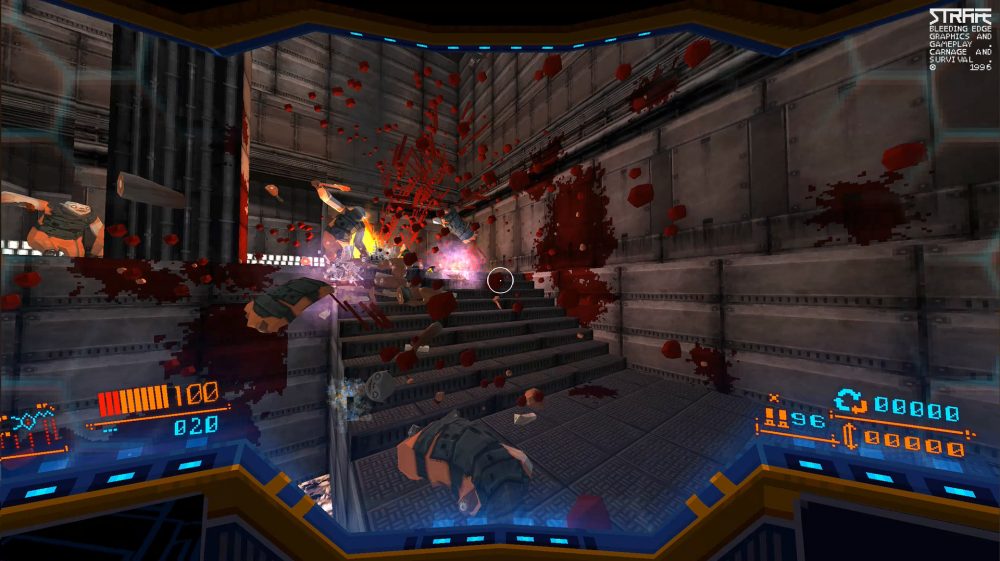 It’s not that all of this would be detrimental to begin with, but because of how Strafe misses the point of many of these elements that proves its greatest weakness. The difficulty feels more like a crutch in Strafe, rather than an force requiring you to think your way through the game. Enemy AI is so vapid it’s practically nonexistent as most enemies simply run in your general direction like mindless zombies (even the more intelligent enemies fall victim to this). It’s areas all feel structurally similar, even when the locations begin to vary later on in the game, but never provide a sense of cohesion or deliberate design. Strafe ultimately feels stitched together, piecing random gameplay philosophies together without the knowledge of what to do with them.

It seems to be lacking the sort of heart you’d expect from a game that so loving tries to pay tribute to the past. While it clearly tries to bring something new to the table, it’s preposterous difficulty and unfair parameters makes it all feel meaningless. There’s no contextualization or reasoning placed on the game’s difficulty. It’s all there for sheer masochistic pain rather than providing tangible and rewarding payoffs for your struggles.

Not everything in Strafe is miserable to play, at least. While guns lack the distinct weight and power that you’d want in a game like this, there is a wide variety at your disposal. Starting from a choice of three main weapons: an assault rifle, a shotgun, and a rail cannon, each can be upgraded, giving you the freedom to explore different options at your leisure. Finding guns scattered on the map also feels important, usually giving you that needed edge in a battle to make it out alive. While they still are very rare and force you to rely more on luck that your own wits, they nevertheless make everything you salvage feel vital.

Strafe attempts to walk the thin line of being harsh but fair but unfortunately falls off it entirely. Because of the variable randomness to each level, there’s very little you can do to improve on each run. Deaths often are at the hand of level’s own unpredictability, making it next to impossible to improve from run to run. Even worse is that, if Strafe was judged solely on its shooter mechanics alone, it fails to be a strong selling point on its own. More importantly, Strafe is a mysteriously hallow experience. Forcing you to replay level after level without much reason to do so, it is almost an exclusively disappointing game. While there are hints of fun to be had if you search hard enough, I don’t think Strafe ever makes the small moments in between worth scavenging.

Strafe is available on PC and PS4. We reviewed the PC version.