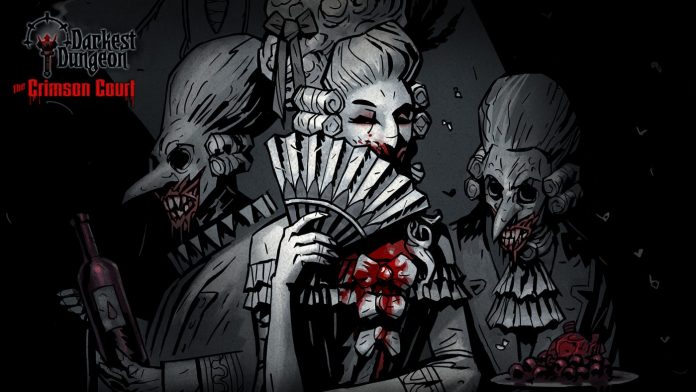 So it was, with a sense of dark enticement, and not a little foreboding, that I once more stepped from the stultifying interior of the morbid coach, onto the deadened earth of my father’s long-sunken estate.

It had been long years since my last sojourn into that darkest dungeon, the calamitous depths of that abysmal manor. Years had changed the place. I found new horrors waiting for me; after no more than three weeks attending to the nightmarish denizens that had crept out of the dank, festering corners of that rotten estate, a new path was revealed to me… the courtyard! Where once my father, at the apex of his gluttonous celebrations, reveled with coarse harlots and sycophants, now, by a stroke of ill fortune, had opened once more. Beyond its gateway, new terrors awaited, along with the remnants of that sad danse macabre, ever a reminder of the mortality of things…

Behold! Crimson Court is the first DLC for the legendary nihilistic roguelike Darkest Dungeon, a parallel campaign experience that offers another tale from the Lovecraftian world created by Red Hook Studios. Coming to us over a year and a half after the official full-release of the main game in January 2016, I couldn’t help but wonder, despite loving the original title, what a DLC could possibly offer.

Darkest Dungeon, after all, is a premier example of storytelling that leaves room for the player; it was difficult to see how they could possibly expand on what was already such an intense and personal experience. Further to that, Darkest Dungeon’s tone is already so at the limit; so despairing in the absolute and cosmic sense, I couldn’t imagine topping what had gone before without straying into the realm of mindless parody. But expand they have, and, against all the odds, delivered a campaign that not only recaptures the magic of playing Darkest Dungeon for the first time, but augments the main game to provide what must be the best Darkest Dungeon experience yet.

What’s most impressive about The Crimson Court, is that it seamlessly integrates with the main campaign. You can choose to add The Crimson Court to your current playthrough, or start a new playthrough from scratch with the The Crimson Court turned on. For the purposes of this review, I started a new game, because I wanted to see how it would change my experience of the early forays into the game’s world.

The courtyard “opens” as a new explorable location after a few weeks have passed, and from there, starts to affect your game-world, introducing new town-events that cause problems for your fledgling heroes. You can opt to foray into the courtyard and attempt what seems to be an innocent and innocuous first quest. Of course, if you expect any quest in Darkest Dungeon will be easy, then you’ve already lost your mind. The Crimson Court lives up to Darkest Dungeon’s benchmark difficulty, with a punishing opening that keeps subverting your expectations. Without ruining anything, just when you think the end’s in sight, there’s another monstrous hurdle to overcome.

Red Hook has really pushed the boat out. The levels of Crimson Court are sprawling, revealing themselves more slowly than previous dungeons – room by room – and even often offering bifurcating paths that force you to make tough and potentially life-determining decisions in your exploration. The distances between rooms are a lot more varied now, which makes adventuring even more unpredictable and engrossing. The monsters are beautifully designed, a joy to fight, and, to my great surprise, break the usual formulas. Several new mechanics have been introduced too, one of which is bloodsucking enemies. These opponents, once they’ve drained a little vital fluid from your heroes, will change, becoming bigger, tougher, harder hitting, and more aggressive. 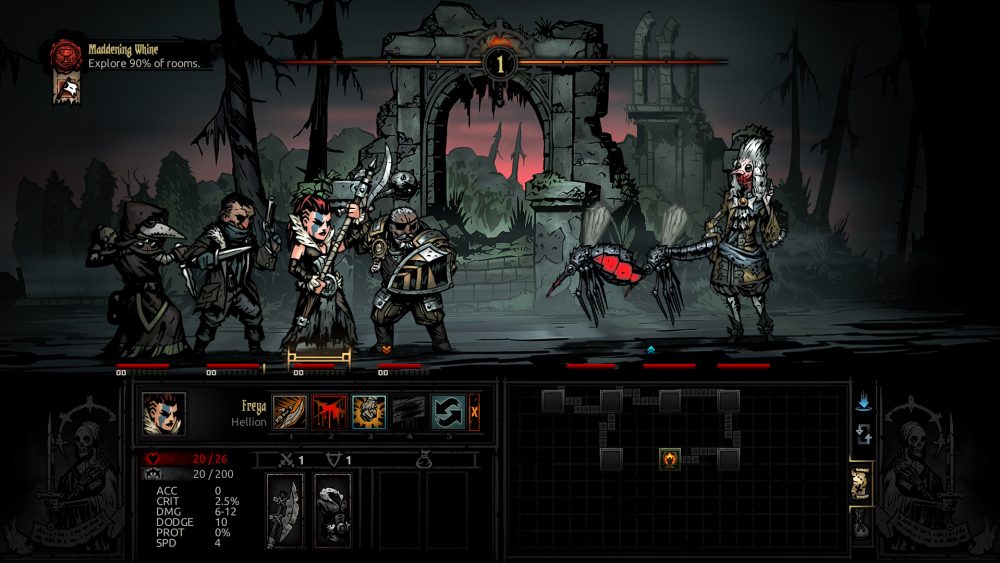 Whereas Darkest Dungeon’s turn-based gameplay previously encouraged strategic play, now, getting enemies down quickly with a little reckless aggression can sometimes be the difference between failure and success. And speaking of new ways of playing, another hero has joined the roster: the Flagellant. The Flagellant is a high-risk, high-reward class that gets stronger the more damage it takes. Not only does he function incredibly well on his own, with some unique abilities and tactics, but actually integrates really well with existing classes, allowing you to create dazzling new combinations. The Antiquarian’s Force Guard ability, for example, makes your Flagellant take twice the hits, which gets him to a state of rapturous ecstasy all the sooner. I personally love this new hero and he fits beautifully with the world and aesthetic of Darkest Dungeon.

It’s amazing just how fresh and new Crimson Court feels despite also conforming to the Darkest Dungeon formulas we know and love. A new disease has been introduced, the Crimson Curse, but this isn’t just another element to be micro-managed. The Crimson Curse is unpredictable; it can spread in different ways, and treatment doesn’t always go to plan. Just when I thought I’d sated my cursed hero’s “thirst”, I had another thing coming.

Red Hook boasted some of the most “complex mechanics yet” in its announcement, and Crimson Court has certainly delivered. The new curios offer a disturbing array of interactions: from life-changing conversations with hooded urchins, to bilious infections from porous insect hives, to “glittering gold, trinkets and baubles” drowned at the bottom of a gore-soaked altar. I felt like I had not even discovered half of the possible outcomes after hours and hours of gameplay, and kept coming back for more. The haunting bass of Wayne June’s ghostly narrator returns, perhaps the distinctive hallmark of the game, with some of the most outrageously opulent, and also poignant dialogue yet written for Darkest Dungeon as our Ancestor describes the hedonistic nights spent in the courtyard.

With The Crimson Court, I feel like Red Hook is taking us even deeper into Lovecraftian parentage, not just in expanding its supernatural mythos and pantheons, but also by delving deeper into the sense of tragedy, the sorrow of fragile mortality that must be a part of all horror. When I defeated the first mini-boss of The Crimson Court, I was rewarded with a beautiful cutscene, hinting at what might have led the courtyard to have fallen into such a state. This is familiar to us: we’re used to these anecdotes about the Ancestor’s causal acts and how they created the darkness that surrounds the estate. We hate the Ancestor, really: he is selfish, repugnantly power-hungry, obsessive, almost certainly mad, unempathic and weak-minded.

But, despite all that, The Crimson Court’s narrative gave me something different: the Ancestor did certain things which made me feel empathy for him, gave me a sense of how he tried to stop the flood of something inevitable, and greater than he could ever be. To feel something new, for a character we have loathed for a year, is an impressive feat, and the writers at Red Hook must be commended. I also sensed, very, very subtly, that the story was also advancing. The narrator was less sarcastic, less taunting. There was a tiredness, a fatalistic exhaustion, which made his commentary ever-slightly tender. Are we moving to a deep catharsis with the Ancestor? Is he, in his state of deathly impermanence, changing somehow? There is so much here to unpack, the depth feels limitless. 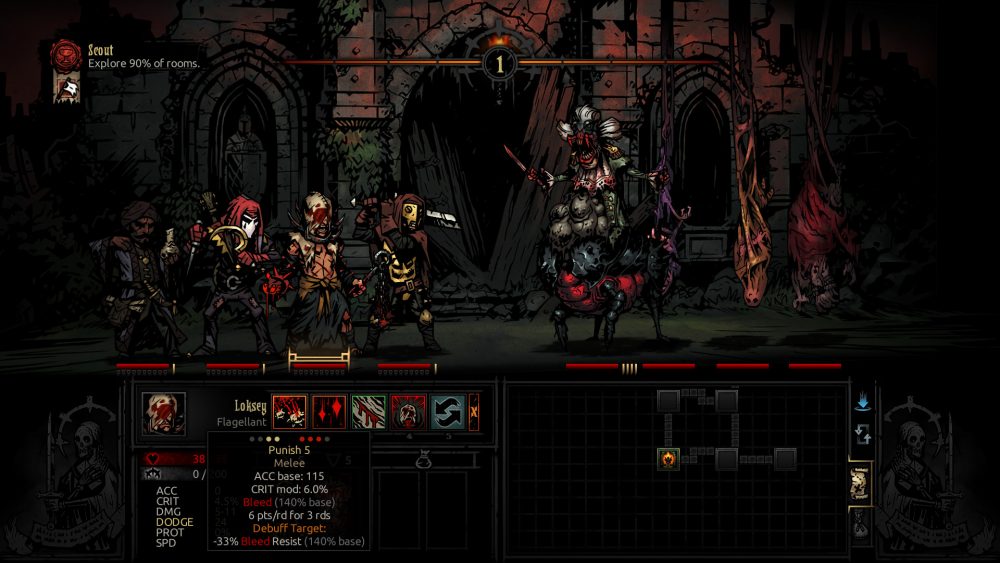 Last but certainly not least, Chris Bourassa’s artwork has reached new levels. Another defining cornerstone of the game, the beautiful 2D hand-drawn artwork set Darkest Dungeon apart from so many of its peers. And now, journeying into the darkness of the courtyard, we see new levels of deranged imagining. Oh, there are such sights to show you! See the creeping inhabitants, stalking between the leprous grass, their bodies half-conjoined with insects as though in salubrious copulation. See their bodies swell as their gore-flecked probuscis drains the life-blood of your most cherished heroes. See the mandibles dripping with phlegmy mucosa, see their swollen heads which part, Thing-like, revealing skull-faces drenched in labial fluids. Yes. Yes. See it all. Revel in your return to this fetid seat of degradation. For return you must, you shall. The lure of The Crimson Court is too great.

Let the duck-legged caretaker ring the bell of the crumbling abbey. Let the light in the dim brothel be lit so that the ladies of the night may once more prepare to welcome the diseased and deranged into their arms, for but one night of bittersweet relief. For you will gather your heroes to you, those too naive to know what waits, and you will send them, time and again, bleatingly, into the onrushing dark. Yes. Welcome back into your life the crippling grind of stagnant progress, as weeks fall away into years, and all your most beloved heroes are buried beneath rotten stone, forgotten as soon as the next stage-coach of hopeful delinquents arrives, seeking glory, or gain, or perhaps even redemption.

Yes. Cry out to your God for the unending punishment to commence again.

Some prayers are yet answered, dear friend.

Your patience has been rewarded.

Darkest Dungeon: The Crimson Court is available on PC.