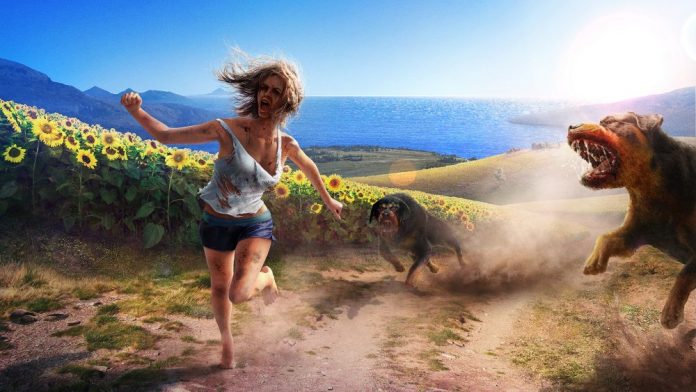 If you’re like us and absolutely adore action-adventure and horror games, you’re going to want to keep your eye on Die Young, a title being released into Early Access tomorrow by IndieGala.

Putting you in the shoes of a young woman who’s been buried alive and left for dead on a beautiful but deadly island, Die Young has you fighting for survival in a world in which it seems everything is out to get you. Dogs, giant rats, snakes and a hulking brute armed with a scythe are all the nasties we’ve been chased by so far, but we have a feeling that there’ll be worse in store the further we proceed.

With an emphasis on exploration, it’s great that Die Young‘s open world already looks and feels brilliant to just get lost in, even though it’s still in alpha stage. There’s an abundance of luscious foliage that really brings everything to life and is also quite practical, as it allows you to reduce your visibility to would-be pursuers. Buildings, meanwhile, are dilapidated and run down, adding to the desperate feel of your struggle while presenting some traversal conundrums that offer a nice break from all the running.

In the video you’ll get to watch us start the game and begin to explore. We visit some ominously deserted houses, explore a crumbling tower, hurriedly enter and then run away from some ruins, before finally finding our way into a crumbling estate. Obviously we get chased a lot along the way, and die quite a few times too. I think we’re going to have to get used to that.

Anyway, give the video a watch and see what you make of Die Young. Bearing in mind once again that this is an Early Access game and everything is subject to changes/improvements/modifications, we’re already rather in love with it.

For more information on Die Young, visit the game’s page on IndieGala.