It’s really a wonderful feeling when a game can remind you of the games of your childhood. A few hours with Monolith had me remembering the old times, while enjoying the new ones.

Monolith does well to keep your blood pumping. It’s a fast, unrelenting, erratic joyride of nostalgic euphoria with just enough punch to make it feel new. Fans of top-down shooters, retro games, roguelikes, and good challenges will love Monolith for its stellar combination of all those. With plenty of variety in each run, unique upgrades and weapons, and fantastic boss fights, you’ll have a lot to handle each time you fire it up. I was never bored, and it was a game that never felt stale. Within a genre that’s becoming as bloated as open-world RPGs, Monolith does a superb job creating a space for itself; a space it earned.

Your time with Monolith will be spent in fairly small, square rooms through a variety of floors, each with their own aesthetic. The tight, hectic, claustrophobic combat in Monolith is beautifully fluid. Every encounter, whether it’s a boss or not, requires quick reactions and precise movement. It’s honestly refreshing to play a game that expects more from its player than it gives. I had runs lasting anywhere between three minutes to an hour, which I think is a telltale sign of a well done roguelike. It does all the right things, while providing an experience that is punishing but never feels unfair. Developer Team D-13 said it was, “tailored to feel good to play” and it sure as hell does.

Weapon variety, while fairly vast, isn’t necessarily new for the genre. You got standard blasters, spread shots, lasers, charged shots, etc. All in all, there are seven weapon types and forty modifiers. With these you can create wondrous tools of destruction, by combining them in a myriad of ways. Monolith succeeds in balancing the game well, in the sense that no matter what powerful combination you create, you’re never blatantly overpowered to the point where an encounter feels too simple. At your disposal you have weapons that feel unique from one another, and are simultaneously simple to use and easy to get a hang of. No matter what weapon you have, or what enemy your fighting, the game never misses a beat and neither does the killer soundtrack. 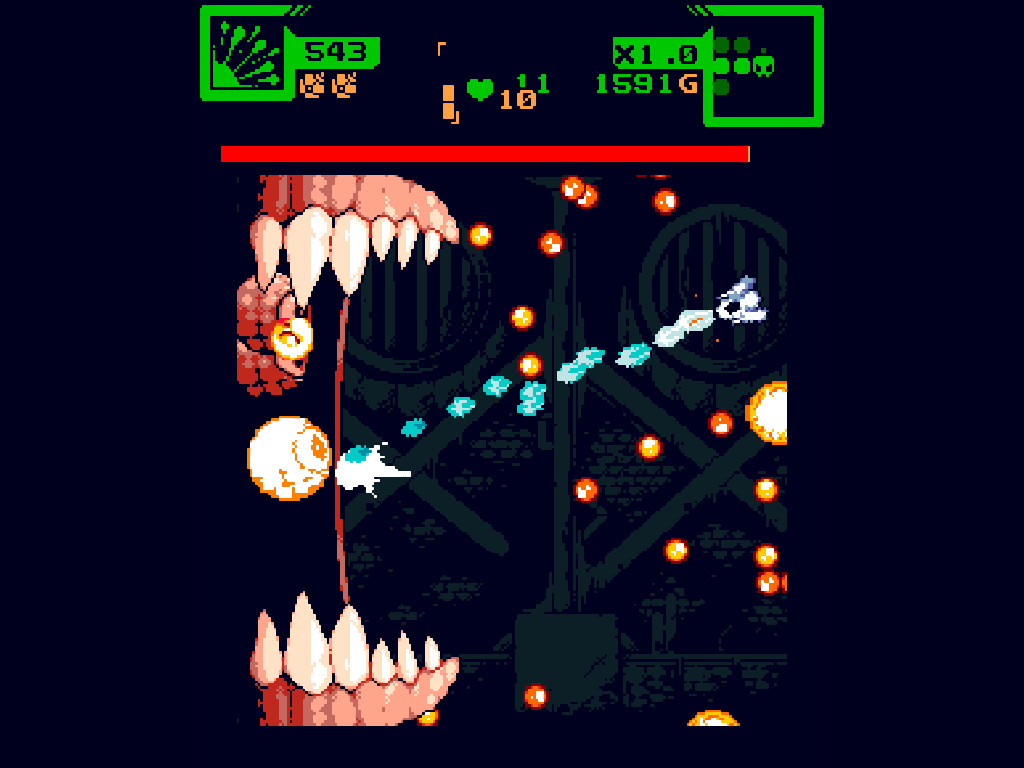 Monolith truly surprises with its effortless flow and charm. It is a clear standout among its bullet-hell brethren, and that fact shines through in its impressively designed boss fights. There’s plenty of bosses that you can encounter, and you never know when they’ll pop up in your run. Each and every boss encounter is insanely manic, challenging, and extremely rewarding upon completion. Every second of Monolith is a palpable firestorm of frenetic action and intense live-or-die moments. Plain and simple: it’s a bullet-hell that feels like heaven to play. I can’t think of anyone who grew up in the SNES era who won’t have a few flashbacks to those days. It surprises in all the right ways, from start to finish.

Now, just because Monolith doesn’t feel unfair doesn’t mean it isn’t rough. I think, in fairness, it could use an option for an easier difficulty. Its base difficulty is great for more hardcore bullet-hell fans, but it could use a cooldown. Replayability is there in spades, but a few different game modes or something like a boss rush (please, that’d be great) would massively benefit the game. But honestly, I wouldn’t label anything about Monolith as bad, just that it could use an expansion on content to further push its playability. This game sucked me in, completely. I just felt like I was playing a game, and damn… that’s a great feeling. No filler, just the meat of a solid gaming experience.

Monolith is a must play for genre fans, and a hidden gem waiting to be enjoyed. The soundtrack is fantastic, the retro design is honest and heartfelt, and the upgrade/weapon/shop system is near perfect. Smooth, fast, electric. The game is just full of energy, and the developers created something fantastic here. I had moments that made me think of Contra, and others that gave me visions of Metroid. Monolith is clearly a game with a lot of heart and it shines through with every moment. In its current state, and with its price point, you really shouldn’t pass it up if you’re into this kind of game. Pure energy and stellar execution.

Monolith is available on PC.