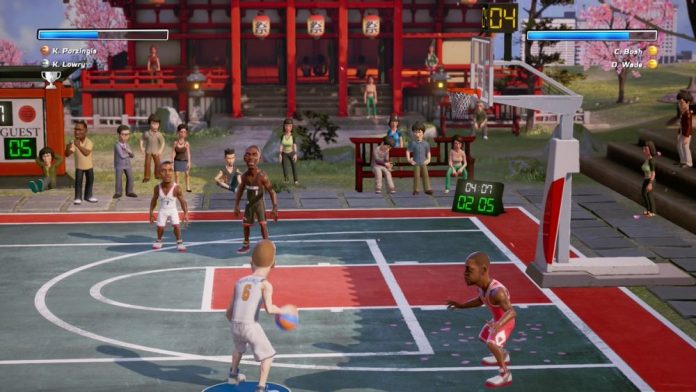 NBA Playgrounds attempts to resurrect the arcade basketball scene – but with mixed results. Although it has heart and offers some fun, it still feels a bit bare and incomplete.

First things first: No, this is not NBA Jam and nor is it really comparable outside the fact that each game is 2v2 arcade basketball. Despite growing up on NBA Jam and having fond memories of it, I’m glad NBA Playgrounds sets its own path and does things a little differently. If you’re looking for a deep experience, you won’t find it here. The ‘depth’ seen in the game is needless, and doesn’t do much more than artificially create more to do. If you play locally with a friend, or online against other people, then you won’t struggle to have a good time. For solo players though, and even with others, there’s a limit to the fun NBA Playgrounds can provide.

NBA Playgrounds gives you three different ways to play the only available game mode. It’s 2v2 basketball in either online, exhibition, or tournament modes. Exhibition allows you to tweak game settings a bit, but overall the experience across all game modes is the same and it gets a bit stale after a while. It is simplistic, easy to learn, and fairly easy to master. The best practice you can get, however, is co-op or online because the AI (both for you team and the opponent) is awful. It’s unresponsive to your commands for picks and alley-oops, opponent AI will just let the shot clock run dry, and the challenge of the tournaments never gets much harder. It’s nice that game is so accessible, but not being able to ramp up difficulty is a turn off.

That being said, NBA Playgrounds has a lot of working parts too. The roster is quite large, with 150 players from all 30 NBA teams and being able to mix and match across different teams is great. Stats for each player actually feel like they make an impact in the game, which means balancing your team is fun and beneficial. A player with a rating of 2 for blocks, for example, will struggle to ever successfully block an opponent. The ‘Lottery Pick’ system, which is a gauge you fill by getting steals, blocks, and dunks, spices things up too. Some of the abilities it gives you, however, are a bit outrageous although the game does say it gives you a “ridiculous advantage”. Dunks worth double points, six second shot clock for the opponent, and automatic makes from past half court are a few of the insane benefits you can get. 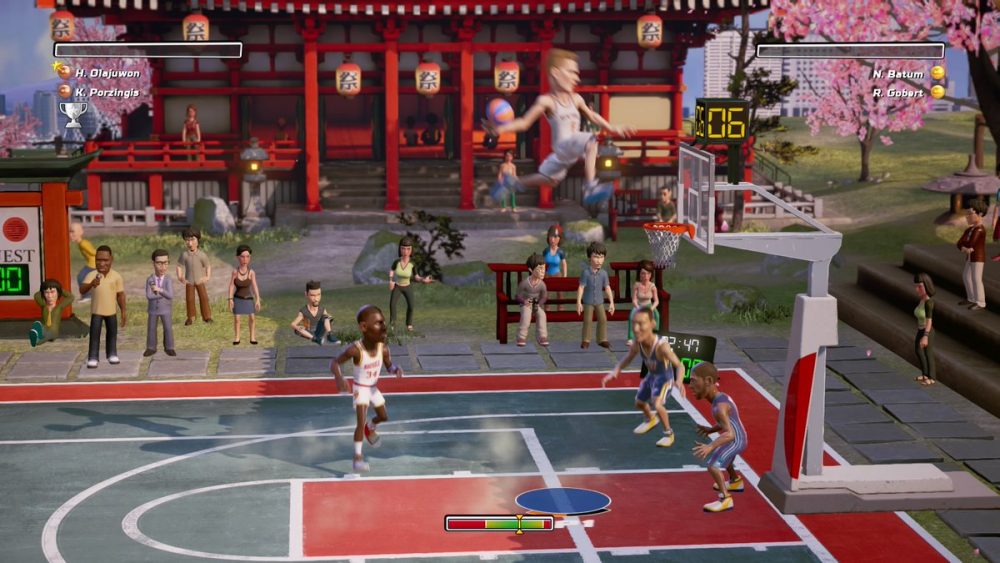 The best analogy for NBA Playgrounds is that it’s like a leaky ship. The exterior, with its charm and aesthetically pleasing look, hides an interior rife with small missteps and annoyances. Ranking up gives you Player Packs, which unlock more characters to use, but it’s not even necessary. You can run through every tournament, unlock every court and ball, with the starting roster no problem. Each player has a rank system, which grants new moves the game doesn’t tell you how to activate. The stamina bar is drained for almost every action; steal attempts and wind ups for dunks will sap your stamina. The first basket scored each game is worth an additional point. The two commentators, Ian Eagle and EJ Johnson, repeat themselves constantly and have no banter between each other. The game attempts to be ‘deep’, when in actuality it isn’t and it shouldn’t try to be.

NBA Playgrounds isn’t a bad game, but it isn’t great. The fun it offers is found almost exclusively in either co-op or online. The solo experience is lacking and doesn’t keep your attention for too long. The game has a great look, and plays decently well when the AI isn’t bugging out. What will most likely bog down your time with the game is the repetitiveness. With basically one game mode to play, it’s hard to make each outing feel different and fun. Playing locally definitely brought back some good memories, and online always made it interesting, but burning through the tournaments to unlock everything felt a bit uneventful and stale. It’s hard to say in its current state that it’s worth the price but the team at Saber Interactive seem dedicated to improvement. I hope they do, because it’s a niche in my catalogue I’d love them to fill.

NBA Playgrounds is available on PC, PS4, Xbox One and Switch. We reviewed the PS4 version.