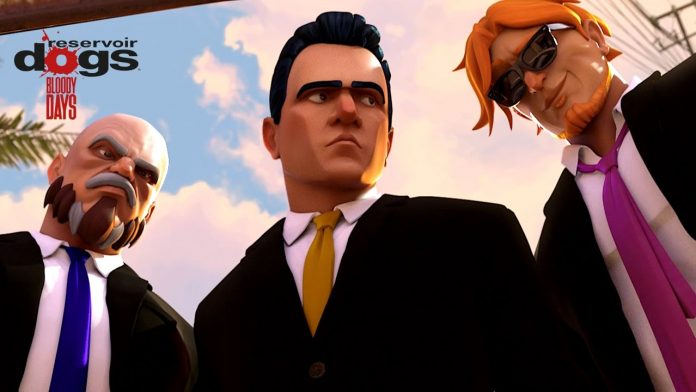 Reservoir Dogs was a seminal film during my adolescence, as it was for many people growing up in the 90s.

Since its release, it’s become an icon of independent filmmaking. It’s unfortunate then that out of its two video game adaptations, both fail to become anything meaningful. In the case of the more recent one: Reservoir Dogs: Bloody Days, it’s even worse. A reminder of the days of old, when bad licensed games cluttered store shelves, Bloody Days is a reminder that we still have not entirely escaped their hellish grasp for good.

A top-down twin-stick shooter taking place in the original film’s universe of differently-coloured criminal masterminds, Reservoir Dogs: Bloody Days does little to remind you of the Tarantino-directed classic that it is based from. Utilising a time-rewind mechanic that allows you to play multiple characters at once, it’s an oddly obtuse formula that never quite pays off. Playing through as one character for a few seconds, manoeuvring them around as enemies encroach onto your position, you then rewind time to replay the same moments again only from a different character while the previous one mimics your movements exactly.

The idea makes sense and, perhaps in a different environment would have worked more efficiently. However, since the camera seems fairly limited in its scope only allowing small portions of the map to be seen at once, it makes it impossible to figure out where all the enemies are coming from. Even worse is that since the game plays out in real time instead of everyone taking turns, it forces you to move without all the knowledge readily available to you. Often, your first character will act as scout, taking out as many enemies as possible as consecutive characters will then be able to react pre-emptively. It’s a convoluted mechanic that, at its best is merely confusing while at its worst makes the game practically unplayable. 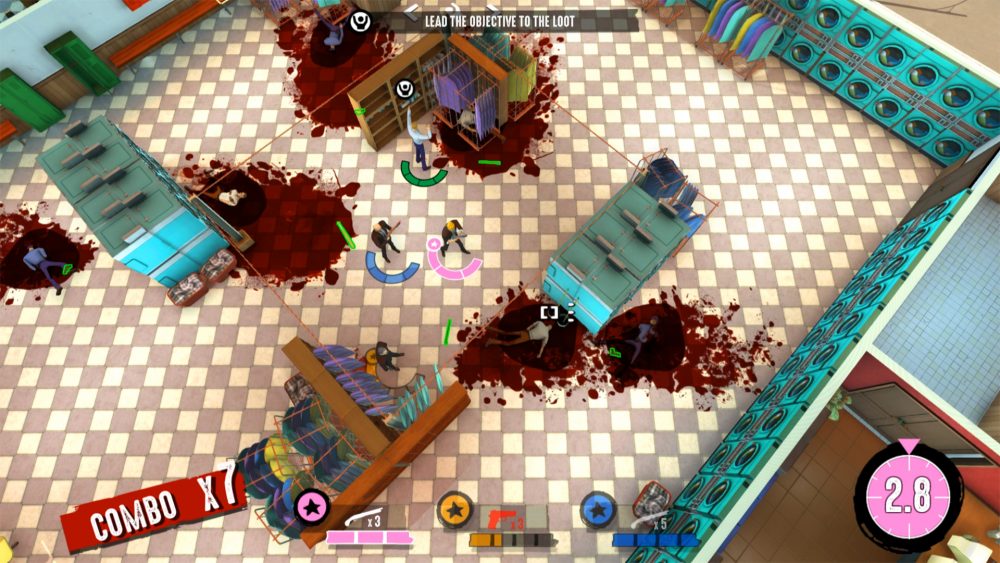 Perhaps most perplexing in this system is the possibility to constantly invalidate yourself as you take control of characters. For instance, if your first character shoots three people down a hallway while being flanked by only one enemy, your second character can take out the flanking enemy quickly and, with nothing else to do, shoot the enemies down the hall that were just about to be killed by your first character. It’s this constantly contradicting gameplay loop that is at the centre of Bloody Days, forcing the entire experience to be an awkward dance to work around.

This core concept also means that no one other than the game’s dimwitted enemies have AI. There’s no option to circumvent the awkward mechanic to let the game’s more frantic elements shine through. Instead, Reservoir Dogs: Bloody Days seems to force itself into its slow and confusing pacing as you constantly juggle control from one character to another, skewing the game’s perspective and, in the end, making itself overly-complicated without reason.

If this alone still hasn’t swayed your opinion one way or the other, perhaps your interest in the source material making you question picking the game up, you’ll be disappointed (as was I) to realise Bloody Days has next to no resemblance to the original film. None of the likenesses of the original actors were acquired and, in their place, developer Big Star Games have created a number of run-of-the-mill stand-ins. Its cell-shaded stylised character portraits may have some charm, especially for those who enjoy Telltale’s style of adventure games, but alas the rest of the game is made up of agonisingly dull environments and character models. It is sometimes impressive that Bloody Days can cover itself with so much blood and yet still look so unremarkable.

Perhaps Bloody Days biggest grievance is its misunderstanding of the source material. Whereas the original film soaked in Tarantino’s now famous nostalgic stylings in a crime caper that’s gone horribly wrong, the entire point of Bloody Days is for things to go right – preposterously right. To the point that the game’s core concept gives you near-omniscience right. While it may superficially retread a similarly desensitised violence found in the original film, little else could be compared from one to the other. In fact, Reservoir Dogs: Bloody Days is better an example of Lionsgate’s misuse of the original property, shelling it out every so often for some quick cash here-and-there to those who still have the iconic poster from the movie hanging next to one of Scarface or The Sopranos. It’s a shame to see such a poor game come from such an enthusiastic movie. Alas, I can’t say that I’m at all surprised.