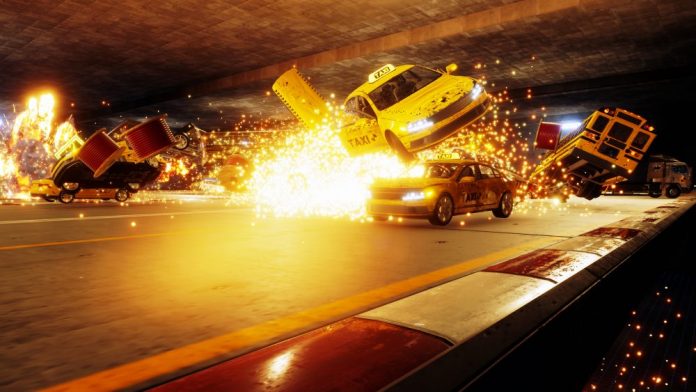 I was really looking forward to Danger Zone, Three Fields Entertainment’s latest release that was touted as the successor to Burnout‘s crash junctions.

Unfortunately, my excitement and anticipation turned to frustrated disappointment almost as soon as I turned the game on. Burnout was an almost perfect racing game. The crash junctions were its fun heart and soul. Danger Zone has taken that heart and soul and stamped all over it.

Okay, perhaps that’s a bit harsh. Maybe I’d feel a little different if I’d never had played Burnout to begin with, then perhaps I’d have less lofty expectations. Unfortunately though, I have played Burnout – and so will have most of the people who are interested in playing Danger Zone. It’s not that Danger Zone is an awful game that’s broken in any way; it’s just so devoid of any kind of personality and spirit, and when it’s claiming to be a spiritual successor to one of the most-loved crash-tastic franchises of all time, that’s a hard pill to swallow.

Upon loading the game, you’re greeted with the most simplistic menu ever to grace your PlayStation 4: you’ve got a choice between Single Player, and Options. And by options, they mean a little diagram of what the buttons do. There’s no music – not just on the menu, but in any of it – which leaves Danger Zone with a weird, hollow, unfinished feeling. You could argue that you wouldn’t be able to hear any music over the sound of crashing vehicles, but with nothing on the menu or score screens, it all feels rather unsettling.

Jumping into the game itself, Danger Zone is made up of four short training rounds and then 20 levels split into three sections. It’s a few hours’ worth of content at best, give or take, depending how good you are at the game. Every level is set in the same area – a literal Danger Zone; a simulation-style testing area for crash scenarios. The road layout changes every time, but the same dreary, dull environment never changes. It’s rather uninspiring, and despite the differences in junctions and traffic placement, every level pretty much merges into each other in a boring mass of orange-illuminated concrete. That feeling of being unfinished never quite goes away; the entire game feels like a demo, or an elongated training mode for what’s to come. Unfortunately, nothing else ever comes. 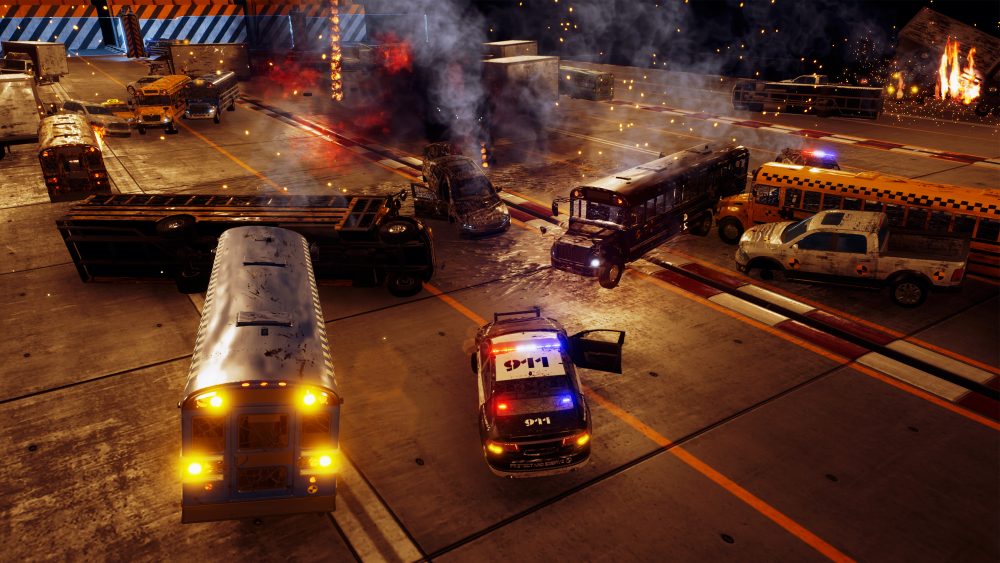 The crashes themselves are mostly fine. They start off fairly easily – simple junctions to crash into, with some pick-ups along the way. SmashBreakers are back from Burnout too – crash into a set number of cars and you’ll be rewarded with the ability to blow your car up, causing mass damage to your immediate area. This is where the true fun of the game lies, and I can’t argue that pulling off a successful SmashBreaker and getting a high score is enjoyable. But the setting of each level feels so clinical and boring that it almost sucks the fun right out. I suppose we’re meant to imagine the roads are digitally imposed into a test area, leaving a dark blue void underneath. Should you fall off any of the roads, you’ll instantly fail the level and need to start all over again. It’s mildly irksome, especially when after an impact you have no control over your car, and it’s fairly easy for something to come hurtling into you, knocking you for six into the end zone below.

The biggest bugbear for me when it comes to Danger Zone‘s gameplay, though, are its controls. Later levels prove to be quite tricky, and sometimes you have to dodge one lot of traffic to aim for another. Trying to control the speed of your car often results in you careening out of control, and should you need to reverse – well, you simply can’t. Yup, Danger Zone is about driving cars that can only go forwards.

I’ll admit that Danger Zone has been made on a budget, and I shouldn’t compare it to what was a full-price AAA release. And while I do feel bad for Three Fields Entertainment, who are a very small team, I can’t help but feel frustrated that they just didn’t do that little bit more to make Danger Zone the hit it could have – and should have – been. The cost-cutting nature of the game is apparent everywhere, from the repetitive location to the lack of music and any kind of voice over. Yet, considering TFE’s determination to succeed, the rushed approach to Danger Zone is disappointing. In an interview with Eurogamer back in April, studio co-founder Alex Ward explained that “everything was riding on this”. Ward explained, in no uncertain terms, that the future of his company depended on how well Danger Zone sells. Had they just held out a few months longer to give the game some polish it desperately needed, we may have been seeing a completely different product. Instead, sales of Danger Zone rely completely on the fact that it’s basically Burnout‘s crash junctions, rather than being a stand-out title on its own.

I can’t really argue that Danger Zone is a fairly solid reenactment of that popular Burnout mode. It is almost exactly the same as crash junctions, down to the way that damage is calculated and how Smashbreakers are triggered. It works fine, it doesn’t really have any bugs, and if you can overlook the horrible controls, then landing a successful crash is still something of a thrill. If you are craving that Burnout action but can’t be arsed to pull out an old console, then sure, Danger Zone will at least remind you of those glory days. Unfortunately it’ll do little else. Its lack of soul is almost too much to bear, so for me, I’ll sit and wait patiently for Burnout Revenge to finally become backwards compatible on Xbox One.

Still, part of me wants it to do well, because I want to believe that Three Fields Entertainment does have it in them to create that true successor we’re all craving for.

Danger Zone is available on PC and PS4. We reviewed the PS4 version.