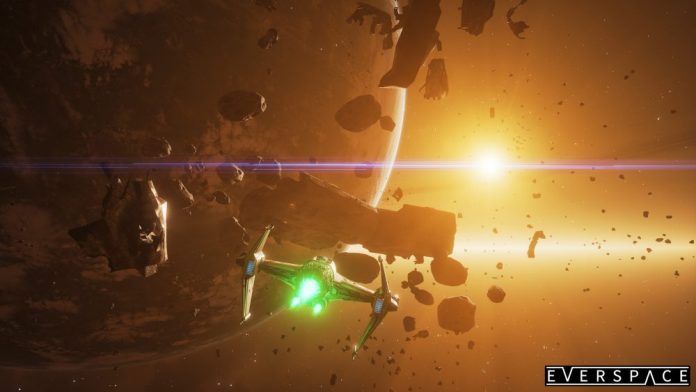 You can watch our video review of Everspace here.

You know, I’ve yearned for another arcade-style space shooter ever since growing tired of playing Project Sylpheed on the Xbox 360.

I just don’t have the time or inclination to learn the complicated controls of a title like Elite: Dangerous. Thankfully, the game I’ve been waiting for has now arrived. Its name? Everspace.

Though to call Everspace simply an arcade-style space shooter is doing it a disservice – there’s more to it than just flying around and shooting baddies. While you can go into the game blind and still find yourself in the thick of the action within minutes, to survive long enough to get the most out of the experience you’re going to need to collect and manage resources, complete challenges and steadily develop your trio of ships. You see, being a rogue-like, Everspace demands that you “git gud” and play the long game. You’ll die time and time again, but with each death comes the opportunity to better yourself and make your next excursion perhaps that little bit more manageable. It makes for an addictive gameplay loop that does run the risk of becoming repetitive, but thankfully the beautiful visuals and excellent pacing prevent that from happening.

You start with just one ship, and with it you begin to head out and explore. No doubt mesmerised by the sights, you’ll be glad that to begin with enemies are sparse, allowing you to get used to the controls while collecting some valuable resources that may come in handy further down the line. When you’re done in an area, you point yourself in the direction of the warp point handily shown by the game’s HUD and head towards it, before choosing your next location via a map. Obviously, the further you progress the more hostiles you encounter and the harder they become to defeat, but a lot of the time the biggest threat to your survival is fuel. Or rather, the lack of it.

There are a wealth of resources to manage whilst you’re out in the field in Everspace. Fuel determines how many warp points you can safely travel through, and so its scarcity often becomes your downfall. Nanobots are used to repair the various functions of your ship that can become non-functional when you sustain damage. Secondary weapons only have a limited number of uses. And other collectables such as ore, gas and crystals can be used to build and upgrade weapons and other helpful items should you have the blueprints to do so. All those are lost when you finally do crash and burn, however. The credits you earn do not though, and while they are useful out in the field to enter into trade deals with non-hostile factions, back at the hangar they are used to purchase permanent ship upgrades and perks which are much more vital to your continued efforts.

So you get the point – being successful in Everspace requires you to seek out and manage all of these resources effectively just as much as it does shooting down enemy ships with ruthlessness and efficiency. But that’s no bad thing. It gives Everspace depth and flow, keeping you hooked as you move seamlessly from exploration to combat and then back again. There’s always a drive to get better at the game so you can see what new areas have in store for you. There’s even a story if you want to pay attention to it – I struggled to do so as I always just wanted to get right back into the action.

What I’m trying to say is that if you’re wanting to pick up an accessible space shooter that you can casually play but has a great deal of depth, Everspace comes more than highly recommended. It’s a game that will have you hooked no matter your skill level.

Everspace is available on Xbox One and PC. We reviewed the PC version.