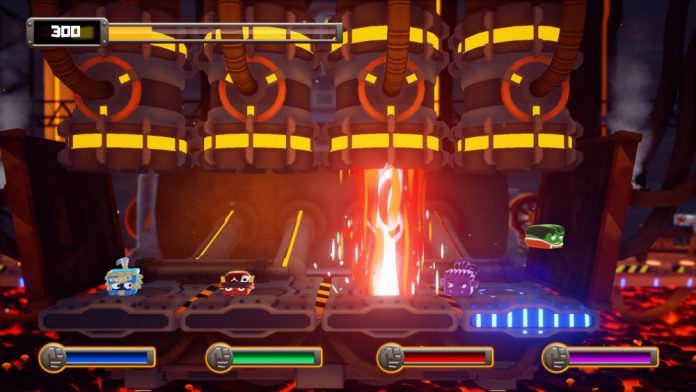 Everyone loves a good party game, and Jump Stars by Jamit Games aims to be the next to have you guffawing when you have a few friends around.

Available on Xbox One and PC, Jump Stars is a local multiplayer-only game for 2 to 4 players. That’s right: there are no singleplayer or online multiplayer options whatsoever. For the low price of £7.99 though, that can just about be forgiven, especially considering how much fun it offers a bunch of people sat on a couch.

Presented as some sort of demented gameshow in which the only prize up for grabs is your life, Jump Stars offers over 20 stages covering 10 event types. In tournament mode you’ll play through a random selection of four events followed by a final Gauntlet event should you prove yourselves worthy. In My Show mode, however, you can select up to nine stages of your liking to play in succession.

The events themselves are quite varied, with each stage also offering something unique even if only in terms of visuals. From the frantic Hunger Pains in which you need to collect pies before the competition in order to stop yourself from wasting away, to TNT, which is essentially a devious game of tag in which you don’t want to be the one left holding a stick of TNT when it explodes, each and every event poses a different challenge that is sure to end up with you cursing at your friends. Our favourite event was Scramble, a mad dash ever-upwards for survival, forcing you to jump like a maniac before you’re swallowed up by lava or electricity rising from the bottom of the screen. 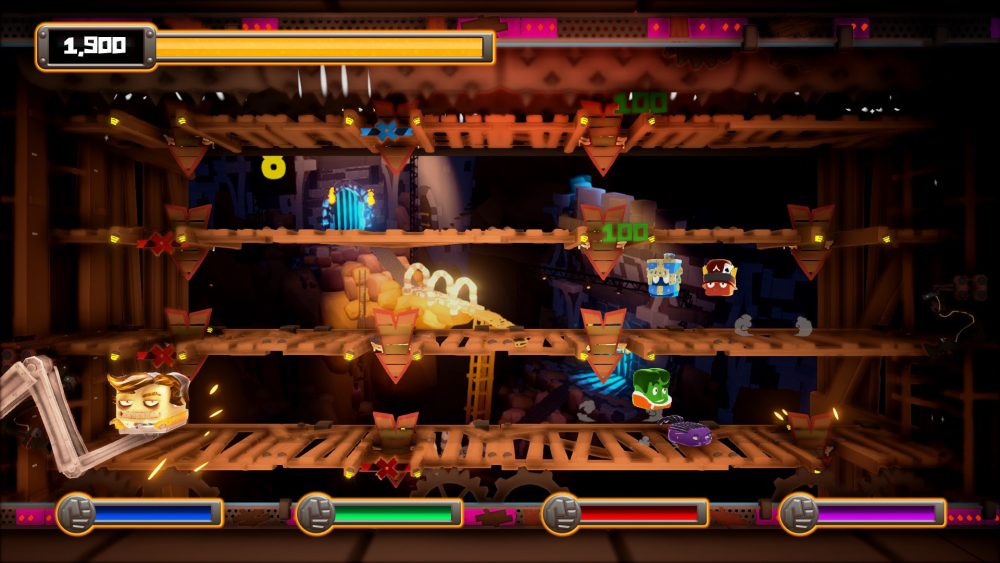 Keeping you on your toes is Jump Stars’ host, a rather unhinged individual who’ll take great pleasure in making things a bit trickier for you by throwing the odd temporary gameplay modifier into the mix. You’ll have to deal with the screen being tilted, your controls reversed and the action turned totally upside down to give just a few examples. Each player can also choose to give their teammates a hard time by punching them. It all adds up to make for some truly riotous and chaotic moments that will have you roaring with laughter.

With events lasting until there’s only one player left standing, that’s the only thing that’s a little baffling about Jump Stars – it can’t decide whether it wants you to work together as a team or against each other competitively. I guess it’s ultimately up to those playing. You certainly need to work as a team in most cases to improve your overall score, but with a podium at the end of each event showing who performed the most effectively, it’s hard to not get the odd sneaky punch in if it means you’ll come out on top.

Aside from the omission of single and online multiplayer offerings, the only thing that brings Jump Stars down a little is its rough presentation. Visually everything is completely fine, but the host’s voice acting sometimes sounds a little rough, and being unceremoniously dumped back on the character select screen from the podium after completing a Tournament or My Show session is a little anticlimactic. There could have been a little fanfare or something to make finishing a game feel like an accomplishment. It’s supposed to be a gameshow, after all.

So it’s a bit rough around the edges, but it’s hard to not like Jump Stars. From its cutesy playable characters to its easy to pick up gameplay, it’s accessible and enjoyable for all, no matter their skill level. It’s undoubtedly a shame that there’s no option to play online, making it only suitable for those who have some like-minded friends close by, but for those who have no problem with that it’ll offer hours of hilarious fun.

Jump Stars is available now on Xbox One and PC. We reviewed the Xbox One version.