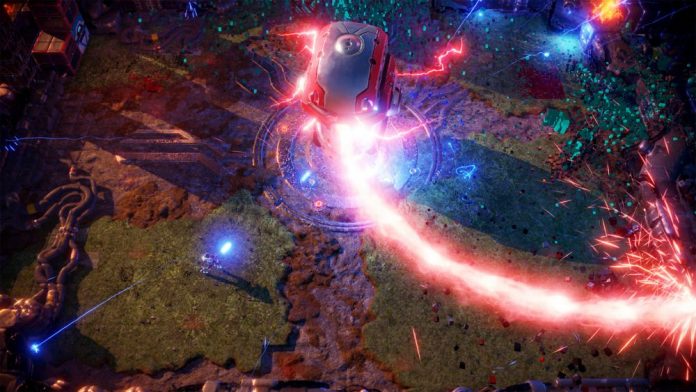 Ever wondered what would happen if Alienation and Resogun got together, did the dirty and produced a bastard child? Wonder no more: Nex Machina is the result of just that.

Nex Machina, from bullet hell master Housemarque, is a twin-stick shooter that sees you fighting through level after level of increasingly difficult enemies, all intent on destroying you with sprays of bullets, missiles, lasers and whatever else they can fire your way. In terms of gameplay, it’s most comparable to Alienation, Housemarque’s last release, but thematically, it shares a lot of similarities with Resogun – especially considering that every level asks you to save a number of humans, just as Resogun did. And just like both of those titles, Nex Machina is absolutely brilliant, with sublime controls that are both accurate and fluid.

The game is spread over six worlds, each with 15 levels. Every level is short, quick-paced and absolutely mental; it’s not the kind of game you tackle in short bursts, doing a few levels at once. If you’re a pro, you’ll be able to whizz through every 15 level world in a matter of minutes, but for us regular humans, who will die time and time again, it’ll take quite a bit longer. There are four difficulty levels available, but even Rookie poses enough of a challenge for most players. The sixth world doesn’t unlock unless you play on Experienced, which throws more enemies at you than Rookie and they’re also a bit faster.

Whatever difficulty you play on though, the action of Nex Machina is constant, fast and frantic. Enemies come at you from all sides and there are many varieties, each with their own attacks. You’ll need to be fast to react and keep your wits about you to dodge everything that comes your way. Making use of your dash ability to quickly avoid bullets and lasers becomes imperative, but it needs to recharge between uses. There are upgrades to collect as you play, too, including secondary weapons, shields and extra dash power. They’re all incredibly useful, and picking up a powerful secondary weapon can make all the difference to your success, especially when fighting a boss. They’ll all be reset when you die, unfortunately. 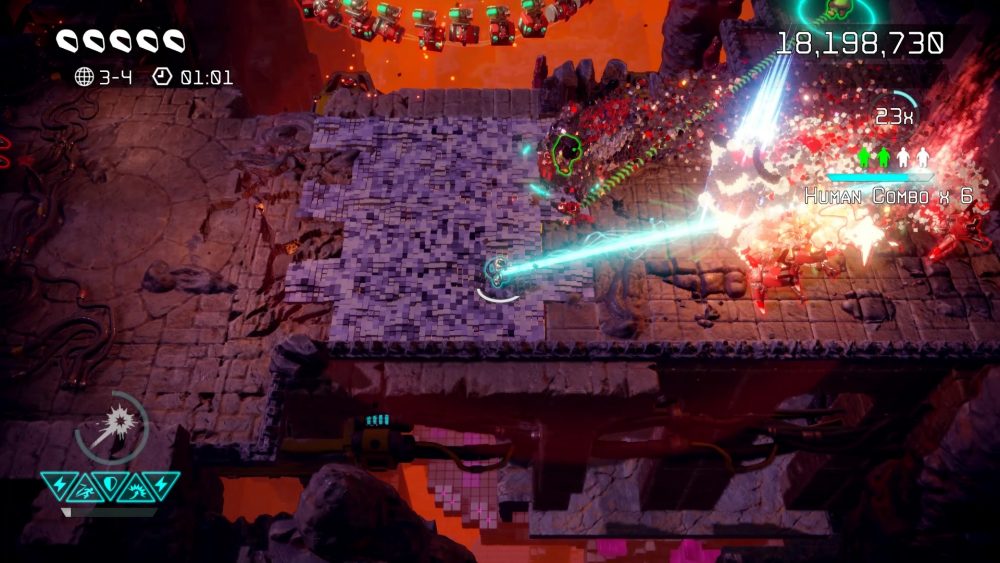 Speaking of bosses, they are the highlight of the game. The last level of every world presents you with a boss fight, although you have to survive a pretty hairy attack from normal enemies before the boss itself will appear. Epic in size, you’ll need to pay close attention and learn each boss’ attack pattern in order to be successful. Every boss varies greatly from the last, and a lot of thought has gone into creating awesome-looking enemy designs with even more awe-inspiring attacks. Your screen becomes a kaleidoscope of projectiles, and when you manage to successfully dodge everything that’s thrown at you, it’s almost a beautiful ballet as you dash through lasers and dance around bullets. The soundtrack only heightens this too; the music of Nex Machina is brilliant throughout, but it’s during the boss battles where it really seems to kick-up a gear, the pounding beat spurring you on and stirring you into action.

Nex Machina has three gameplay modes. The main course is Arcade mode, which has you running and gunning through each of the worlds consecutively, trying to net the highest score you can. There’s also the option to jump into any single world, providing you’ve already unlocked it by playing in Arcade. Finally, there’s an Arena mode, which puts a heavy emphasis on chasing the leaderboards. With only a trio of challenges unlocked initially, Arena sees you fighting through levels with set conditions in order to try and set the best score possible. Perform adequately and you can earn a nice bunch of credits to add to those you’ve collected while playing, which can then be used to unlock yet more challenges to display your prowess on.

A big draw of the game, though, is that it allows you to play Arcade and Single World modes in local co-op. Playing with a friend by your side is perhaps the optimum way to enjoy Nex Machina – it’s huge amounts of fun, but the game becomes even more crazy than it does in single player. You and your partner share lives and continues, so you need to work well as a team in order to best the foes that are out to get you. Moving far away from each other pans the camera out, which can make it harder to keep up with everything that’s happening on screen, so staying close and battling foes side-by-side is often the key to success.

Nex Machina is like a pure dose of adrenaline. The visuals are so detailed, so fluid and so colourful that your eyes nearly pop out of your head trying to keep track of everything. And the soundtrack is utterly fantastic, perfectly matched to the action on-screen, making you tap your foot rhythmically from the minute you start playing. Housemarque has done it again; Nex Machina is a brilliantly action-packed shooter that’s engrossing, addictive and absolutely sublime from start to finish.

Nex Machina is available on PlayStation 4 and PC. We reviewed the PC version.