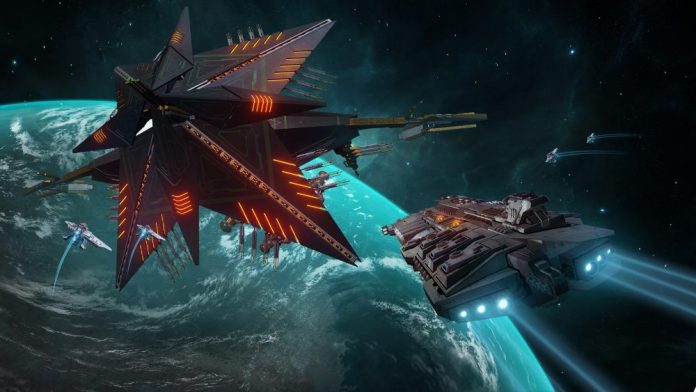 Let’s get this out of the way right now; Starpoint Gemini Warlords is not a game about peaceful conflict resolution.

If you sat down to Star Wars expecting the Rebellion and the Empire to settle their differences over a nice cup of tea, then this is not the game for you. If, on the other hand, you watched the Death Star annihilate Alderaan and thought “I want one of those”, you’ll be right at home.

Starpoint Gemini Warlords doesn’t quite give you the power to annihilate planets, but it comes pretty darn close. Eschewing the diplomatic option, this space-based strategy/action game has you iron-fisting your way across the galaxy, ostensibly so that your own faction doesn’t end up crushed beneath someone else’s space-jackboot. There’s a plot of sorts but Starpoint Gemini Warlords’ narrative failed to engage me, perhaps because I hadn’t played the previous game. It doesn’t help that the characters look like they’ve escaped from a bad eighties movie; less Battlestar Galactica, more Space Mutiny. But all you really need to know is that the galaxy is going down, and you’re the one to bring it to its knees.

Starpoint Gemini Warlords is an odd space-fish. Unlike many 4X games where you command your armada from a God’s-eye view, this time around you’re getting down and dirty with your fleet. You spend the game’s first hour striking out on your own, which gives you the impression you’re dabbling with a rather mediocre Elite clone. But once you’ve reached a certain point in the narrative, the game opens up, revealing itself to be much grander in scope and consequently becomes a far more ambitious and rewarding title.

That said, your faction, the “Solari Concord” come off as being a bit naff, at least until you build them up into a galaxy-threatening fighting force. Bafflingly, they insist on making you pay for your own command vessel, the game refusing to let you progress unless you’ve upgraded. You can bypass this by jumping straight into the game’s free-roam mode, though I’d recommend leaving that for your second playthrough since you miss out on essential tutorial information. 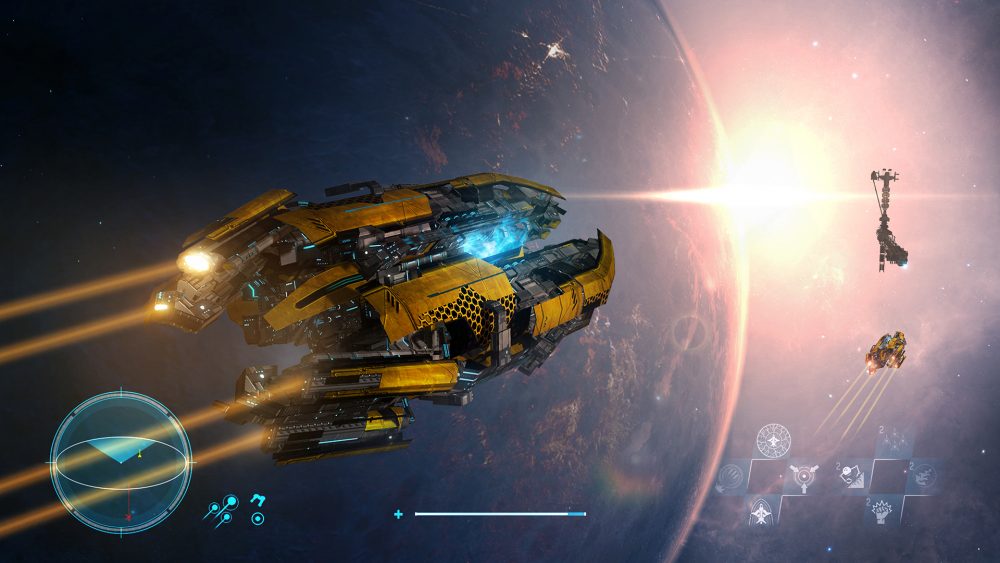 Controlling your ship is a piece of cake, even with a joypad. In fact, thanks to Starpoint Gemini Warlords’ intuitive radial menus it’s easier to play the game with an Xbox One joypad than it is to wrestle with a keyboard. Since you’re leading your fleet into combat, perhaps unwisely, you automatically lose the battle if your ship is annihilated. This might seem to be at odds with the game’s focus on fleet-building, but the developers have wisely included a “fire at will” auto-fire feature that takes a great deal of the pressure off. I was relieved to discover I’d only have to concentrate on flying my ship and balancing shields, weapon and engine power, if I so desired, allowing me to watch the battle unfold.

And there’s no doubt that, in the world of Starpoint Gemini Warlords, combat is a starkly beautiful affair. You can pitch massive fleets against each other and while my PC is no powerhouse, I beheld my ship’s beam weapons scything through the enemy’s armour, fire belching from the craft around me as the battle raged. Even when you’re not engaged in combat, Starpoint Gemini Warlords’ universe is a real spectacle. You’ll fly through shimmering nebulae, plough through fields of asteroids, and even investigate bizarre spatial anomalies. The game sports a wealth of ship designs, although, from my experience thus far, the designs don’t seem to be tied to any particular faction. The ships handle fairly well, though I do still feel that the “battleship” class of vessel should be a little more sluggish.

But what really makes Starpoint Gemini Warlords such an appealing experience is how alive the universe feels, something that the much-hyped No Man’s Sky failed to convey. Even when you’re building up your war fleets, ready to expand your territory, life goes on for the rest of the universe. Try following a freighter and you’ll see them going around their business, whether it be flying to another system or mining ice asteroids. Likewise, pirates roam the galaxy, laying into hapless travellers with little concern for your quest for galactic domination. So convincing is Starpoint Gemini Warlords’ galaxy that I actually felt a little guilty about besieging a planet with my fleet, inflicting God knows what misery on the populace below. Not for long, though.

It’s hugely satisfying watching your empire expand, to the point where I considered purchasing a high-backed black swivel chair so I could lord over my planets, Evil Emperor style. Force the enemy out of a territory, usually by obliterating them, and you’re ready to expand. Though there’s always the risk they’ll hit back; Starpoint Gemini Warlords is challenging enough that you’re not guaranteed victory.  You’re granted a huge amount of freedom to build your fleets, with resources coming from the territories you conquer and the facilities you build. You can mix and match ships as you see fit, though you quickly learn what does and doesn’t work. Yet Starpoint Gemini Warlords has a fundamental flaw, one which damages the game, though not to an irreparable degree. 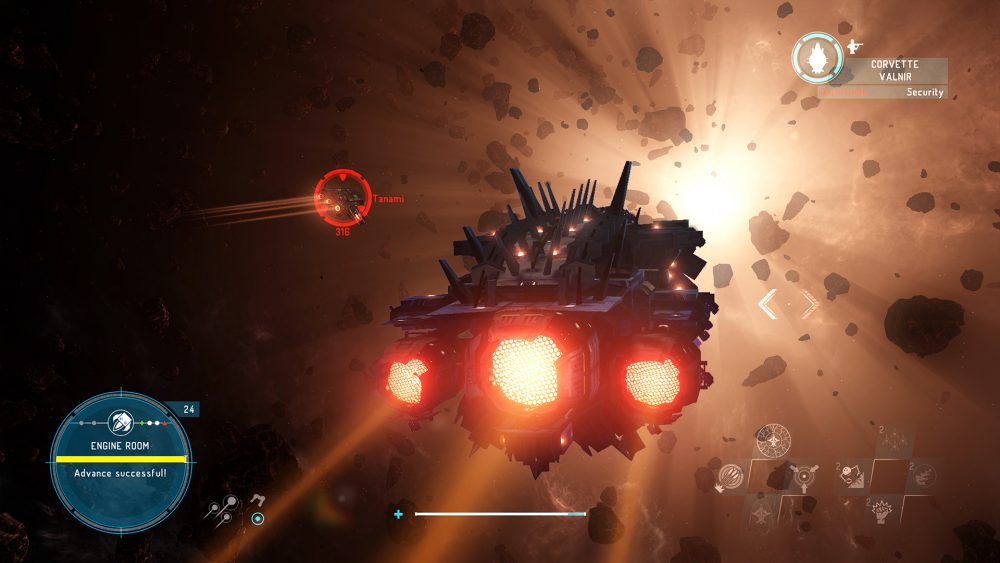 The problem is that when it comes to actually engaging in combat, you have next to no freedom to direct your ships. They’ll follow you into battle but then they engage the enemy with all the finesse and judgement of a drunk man fighting his own reflection. While you can, briefly, designate targets, your ships appear to attack largely at random. Flanking your enemy, an approach that would be simple in many other space strategy games such as a Homeworld, is nigh on impossible. Given how much care and attention to detail has been lavished on the rest of the game, it seems odd that this aspect of the game has been neglected. Allowing you to freeze time and issue orders to individual vessels would help elevate Starpoint Gemini Warlords to the top tier of 4X strategy games.

There is room for improvement here, but you won’t regret the time you spend subjugating the virtual galaxy. As is, Starpoint Gemini Warlords is a solid space strategy game; an eye-pleasing time-eater which will more than sate your desire for galactic conquest.