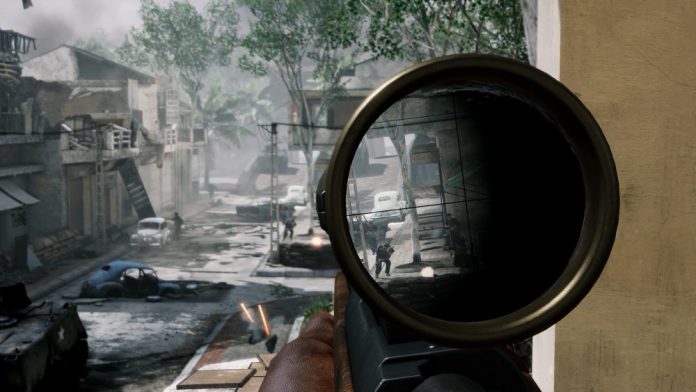 I’m a fan of the Red Orchestra series, as well as its competitors such as ARMA and Operation Flashpoint.

These games aim to offer a more realistic and grounded approach to the large open battlefield genre of multiplayer FPS games. While they’re not to everyone’s taste, they can provide a unique hardcore experience for those willing to persevere. Red Orchestra from Tripwire Interactive was one of the more popular PC shooters of old, and followed up with a very good sequel. It wasn’t as accurate or as simulation-like as the likes of ARMA, but it still designed itself around basic concepts which put it squarely within the same genre, far removed from the likes of Call of Duty or Battlefield.

Enter Rising Storm 2: Vietnam, the latest epic battlefield multiplayer from Tripwire. There are a few familiar features here from previous titles that make sure it keeps that same level of realism and immersion. Unless you’re familiar with this type of realistic shooter, you’re going to find there’s a very difficult curve to the gameplay. Give it a chance and learn the ropes though, and Rising Storm 2 offers up a particularly rewarding experience.

The most blatant thing that will throw people off on first playing is the weapon sway. When shooting from the hip, the gun sways around as you move your aim and never quite centres itself unless you purposefully align it to do so. Even though your view might be centred on a target, chances are it’s aiming off somewhere else entirely. While it’s completely possible to shoot from the hip at close-medium range, the mechanic is to deter random and gut-reaction shots that would otherwise reward lesser-tactical players.

Another feature that might alienate some players is the lack of an ammo counter. You must manually check your magazine or clip for how many bullets are left. Your soldier pulls back on their weapon to expose the chamber, and you get a glimpse at a small icon with a bar showing you roughly how much ammo is left to shoot. You won’t have a precise number, so the only moment of certainty you’ll have is that fear-inducing click/ping when there is no bullet fed in the chamber.

This realism extends into Rising Storm 2: Vietnam‘s health system as well. In reality, being hit by a single bullet is often not enough to incapacitate or kill someone; depending on placement, it’s possible for someone to take multiple bullets. The game maintains this kind of authenticity by having bullet impact realistically affect the player shot. 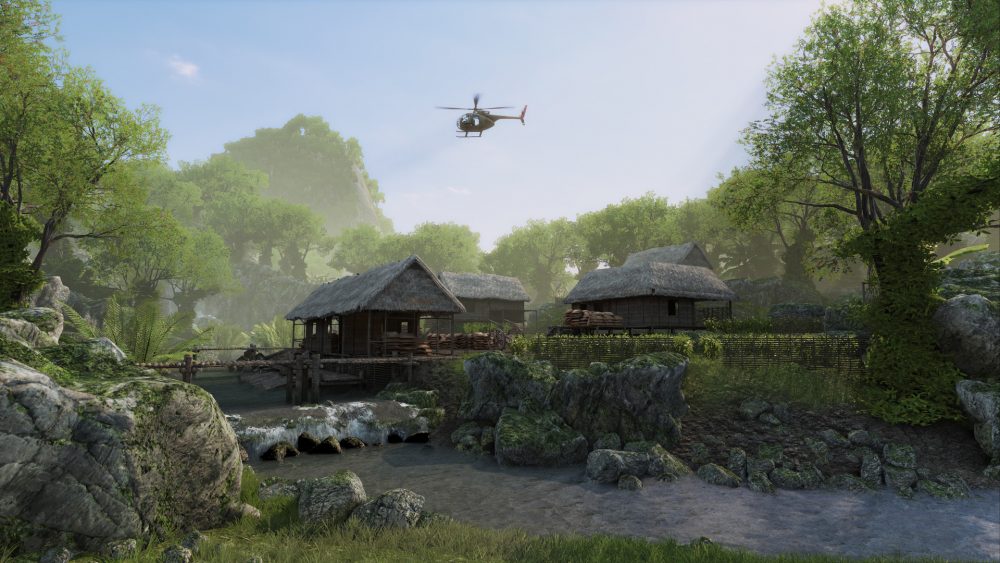 Being shot isn’t the only way you can be taken out of the fight, either; suppression is equally as worrying. Just having bullets land near you or being amid a barrage of explosions will send your character into a discoloured vision state, blurring the edges of your screen and denying you focus of anything beyond a few feet. You’ll be just as useless in this state as you would be dead. You won’t be able to see anything move in front of you at a reasonable distance. These moments require you put your gun down, hunker down into cover, and wait it out.

The excellent sound design of Rising Storm 2 also helps drive this feeling of fear home. Gunshot sounds pack a tremendous amount of punch to them, and helicopters whirring over create unease. Mix this with the sound of endless fire engulfing the landscape and an artillery barrage shacking the earth around you, and it’s overwhelming. Having a good set of headphones really helps make the game an incredibly immersive experience.

While a modern AAA first-person shooter encourages and even rewards players who run into a room and spray bullets everywhere, Rising Storm 2: Vietnam is the complete opposite. It’s completely normal in these matches to hunker down in an objective, and take pop-shots at oncoming enemies. It’s a much more tactful game that requires patience, good positioning, and an understanding of what restrictions your solider has compared to most other video games. If you can get your head around the concept that you are just a regular soldier, and you can’t 1 vs 4 a squad alone, then you’ll find an incredibly unique experience here. Having said that, I did find a few chance opportunities to mow down a group of enemies that I stumbled upon from behind. These moments are rare, and is more a case of the other team’s ineptitude rather than overpowered intention on your part.

As for loadouts, each army is given a maximum capacity for each role. With the sniper and flamethrower class being the most popular, there’s still enough variety on offer that you can always choose something else if you want a change of pace. The regular grunt type is fun to play by itself however, and will likely be your class 80% of the time. Both sides offer a full-auto and semi-auto option; a machine gun or rifle. Neither will lock you exclusively into any range of combat, but it’s obviously easier to spray from the hip with a machine gun and hit your target at close range than it is to spam the trigger of a semi-auto rifle.

You can bandage light wounds if you’re lucky enough to take such a light hit, and you have grenades, claymores and traps at your disposal if you need equipment to take care of a specific situation. Overall however, Rising Storm 2: Vietnam mostly requires you to rely on your main weapon to get the job done. The slow pace of the soldiers’ movements and shooting reflexes means you can’t really afford to be fumbling around with equipment-swapping in the middle of a firefight. Rising Storm 2: Vietnam rewards players who move purposefully and tactfully, keeping their gun in a position that’s ready to swing into iron-sight aim and fire on an enemy.

It obviously takes a certain kind of FPS fan to enjoy the type of experience that Rising Storm 2: Vietnam offers. If you want to be rewarded for tactics and careful approaches on objectives, then this will more than satisfy your needs and provide you with a very unique and carefully balanced experience. Maps are large enough to match Battlefield‘s medium-scale maps, and they offer multiple phases just like Battlefield does too. There’s a few missteps here and there though, such as badly-placed rocks that don’t allow you to clamber over them despite being shorter than knee-height. Situations like these, coupled with rough collision detection, on occasion led to me dying. 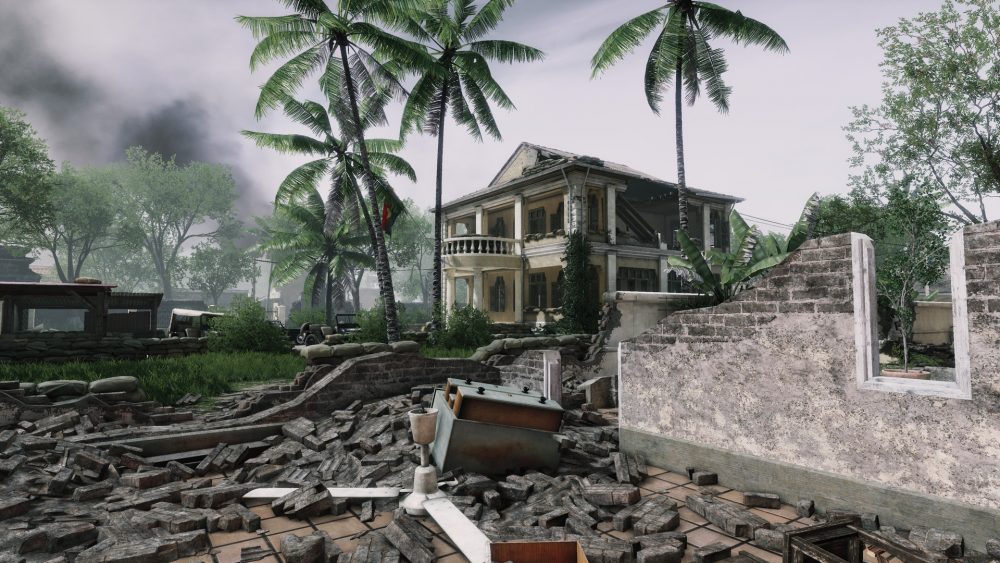 In terms of hardcore gameplay, I personally prefer the Red Orchestra series. It was more restrictive in terms of weaponry, which in turn led to a more refined and realistic experience. Rising Storm 2: Vietnam‘s weapons are a little more relaxed and capable in comparison, so that tends to move the gameplay style more into the average FPS territory somewhat. That’s not to say Rising Storm 2 isn’t a worthwhile experience in its own right, however. It still has a lot of strengths that make it a worthy contender in the realistic FPS genre.

Vietnam is an absolutely brilliant setting for one; I felt as if I was able to experience a very tiny amount of what it might have felt like to be taking cover in a burning straw hut, as napalm and artillery smacks the ground around me, waiting for my squad to follow up on approaching an open piece of terrain, hoping no-one guns us down. Deaths are instant, quick, and random. They feel like how you would expect the war to be; unforgiving, brutal, and non-discriminating. You feel like every corner, every step, and every movement of your character might give away your position and send you straight back to a respawn point. That experience can’t really be matched by many sim-like shooters these days.

While games like Call of Duty and Battlefield serve to entertain and empower the player, Rising Storm 2: Vietnam and its brethren aim to do the complete opposite. It tries to give you as authentic an experience as they can, while still being considered a video game. Rising Storm 2 uses its mechanics and restrictive boundaries within the rulesets of a game world in order to provide you with an experience that you have to wrestle with to make work. It’s not easy, but the rewards for those who take the time to understand its intentions are endless.