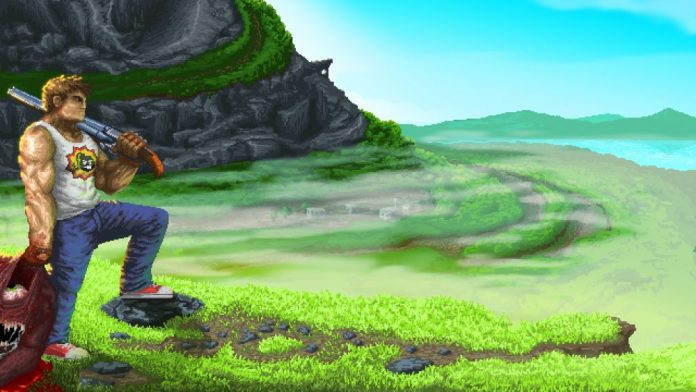 Serious Sam’s Bogus Detour is 100% Serious Sam, but in 2D. I mean that in the best possible way.

Now I’ve played Serious Sam’s Bogus Detour though, I rather wish I had, and I’m quite tempted to go and buy the damn collection on Steam. Bogus Detour is nothing but riotous fun from start to finish. If you’ve ever enjoyed a twin-stick shooter in the past, I urge you to give this one a go, because it’s bloody great. Bloody being the operative word, because there’s gonna be a lot of blood by the time you’ve finished.

As you’d expect from any self-respecting twin-stick shooter, there are enemies everywhere. Exploding ones, shooting ones, big fat charging ones, laser beam ones; you name it, Serious Sam’s Bogus Detour has it. It’s not quite all about shooting though, as every level has some environmental puzzling involved which makes for a welcome bit of depth. You’ll need to find keycards to unlock new areas, and there are plenty of secrets to find in each level if you want to stick around long enough to thoroughly explore.

There’s a decent RPG levelling system too. You’ll gain experience for killing enemies and collecting pick-ups, and for every level you earn, you’ll be granted stars. Extra stars are also hidden around the levels, and since you tend to level up pretty fast, it doesn’t take long to build up a pretty big collection of stars. These can be exchanged for a number of upgrades and perks, such as extra ammo capacity, higher maximum health, quicker weapon reload speed, etc. It’s a great addition that helps you feel like you’re always making progress… even if you die quite a lot. 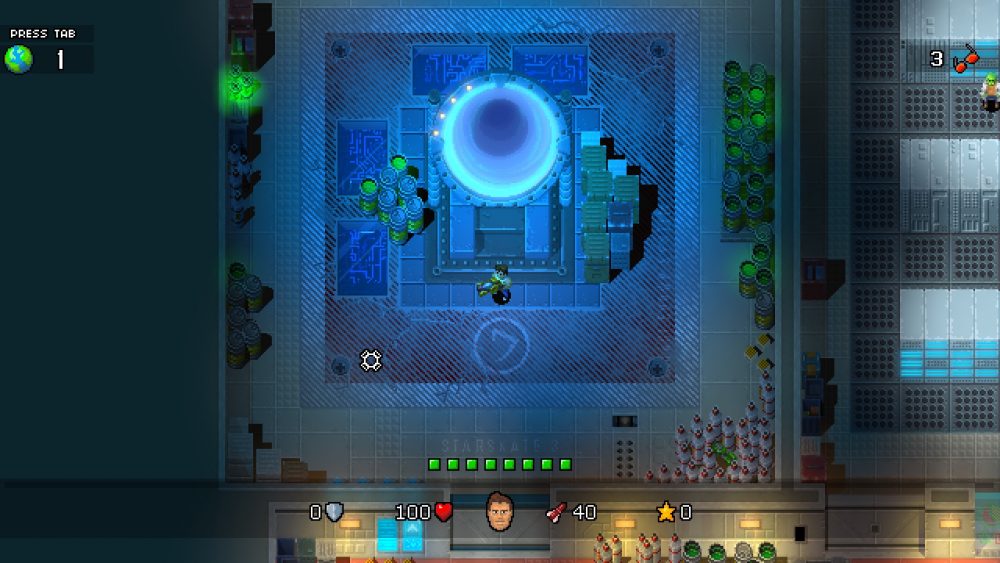 That’s the main downfall of Serious Sam’s Bogus Detour. It’s fiendishly difficult, especially as you get closer to the end. Playing on Easy didn’t pose too much of a challenge until the last level, but the last boss has proved impossible to beat; even in co-op mode with six extra lives between us, we couldn’t defeat the bastard. I haven’t even dared try it on a harder difficulty, but for those who relish a devilish challenge, well, Bogus Detour certainly has it in droves.

It’s not so difficult that it put me off playing though; quite the opposite. Even when death is just around the corner, playing Serious Sam’s Bogus Detour is just so much damn fun that dying is a minor inconvenience, making me eager to jump right back in to the action and strive to do better. It’s a bit annoying that once your lives are all gone you’ve got to restart the entire level – especially if it’s the boss that’s finished you off – but hey, that’s the price you’ve got to pay for not being quite badass enough.

Serious Sam’s Bogus Detour is great fun in single player, but it takes things to a whole other level when you’re playing with others in online co-op. After all, over-the-top, crazy brain-shooting, gut-exploding fun is always more enjoyable when shared, right? Outside of playing the main campaign in co-op, there’s also survival mode, pitting you against waves of enemies, and a versus ‘kill or be killed’ mode. Teaming up with friends is quick and easy, and you can play with up to three others at once. Matchmaking is a little slow though if you’re hoping to play with randoms as there rarely seems to be any public games available. But that’s no issue; just convince a friend to buy the game. They won’t be disappointed.

Not having played a Serious Sam game before, I groaned a bit when I was roped into playing it in co-op. It only took a few minutes for me to choke on that groan though as I was soon having far too much fun blasting through hordes of enemies and mini-gunning my way through foes like there was no tomorrow. As far as co-op experiences go, Serious Sam’s Bogus Detour is up there with the best. Even in single player, you’re in for a damn good ride. Just make sure you’ve got plenty of time on your hands for when you inevitably die and have to restart that last level again and again.