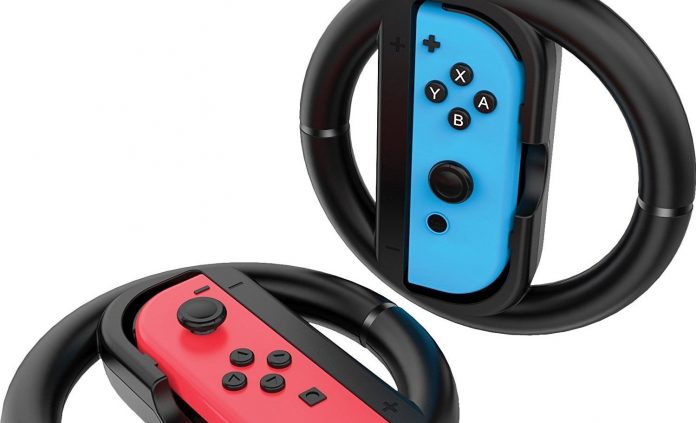 Well, kinda. I was on the fence about it. The Switch is the first Nintendo console I’ve had since the Nintendo 64 (well, I had a Wii, but I’m not really going to count that) so I’ve not played much Mario Kart since being a nipper. I was excited to jump behind Mario’s wheel and race some coolly colourful tracks – and while it was fun, it didn’t blow me away. Let’s not talk about the cheating AI, that stupid lightning bolt attack and those blasted blue shells. It’s not good for my blood pressure.

Playing Mario Kart 8 Deluxe in multiplayer with the Switch’s joy-con controllers is a bit fiddly – they’re a bit small for fully-grown human hands, and are a bit uncomfortable to properly grip for extended racing sessions. Playing with Pro controllers fares a little better – but at £60 a pop it’s not the cheapest solution.

However, I found the perfect answer to my woes in the form of two little plastic wheels: the Venom Switch Racing Wheels. They come in a set of two for £12, and your joy-con simply click into the centre of each. They’re still fairly small, but are much more comfortable to hold in your hand than a joy-con controller by itself. 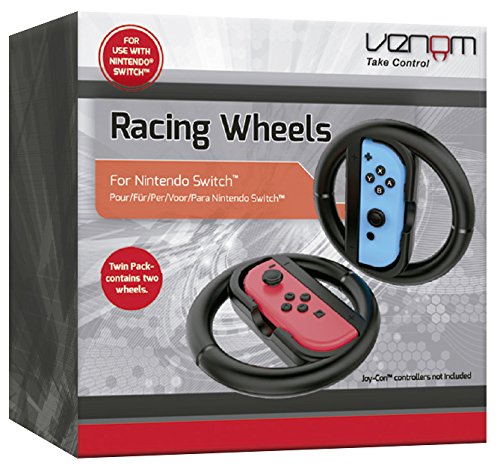 If you haven’t yet tried Mario Kart 8 Deluxe with motion controls, you’re really missing out.

You can use motion controls without a steering wheel, but where’s the fun in that? You can switch between motion and standard controls on the vehicle select screen: press the + or – button on your joy-con to bring up the advanced menu, and toggle it on or off from there. I was incredibly surprised with how well it works; the joy-con have just the right amount of sensitivity, responding to each turn exactly how you’d expect it to. Where pressing a thumbstick to turn is run-of-the-mill, steering your Yoshi or Princess Peach around each corner with your hands around a teeny steering wheel makes every race feel like much more of an event. Sure, it doesn’t make those blasted blue shells any easier to deal with, but I was having more fun racing, so I didn’t care as much when I inevitably went from first place to last place in the space of about 10 seconds.

Using the steering wheels makes Mario Kart much more accessible to other people who might be less familiar with games, too. While it’s a pretty user friendly game as it is, turning on motion controls and auto movement in the options means all you have to focus on is turning around corners. From your 3 year old cousin to your 98-year old great grandma, that’s something everyone can join in with.

Hopefully in time, other racing games on the Switch will make use of motion controls so the Venom Switch Racing Wheels have more application outside of Mario Kart 8 Deluxe. But if you enjoy a lot of Mario Kart, they’re a worthwhile purchase to make your game just that much more fun.