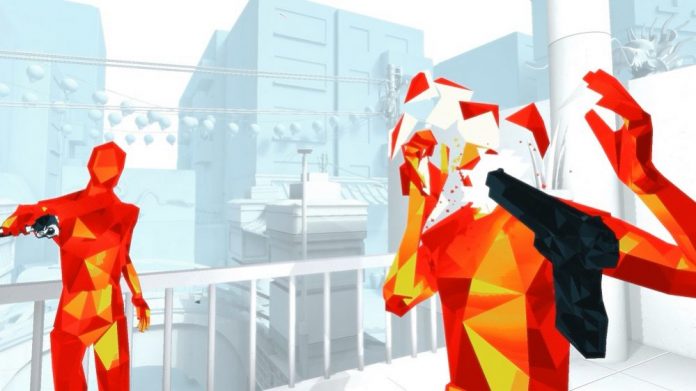 It’s an interesting and quirky idea thrown on top of the FPS genre, which has always been touted as being somewhat stale and unimaginative. It was no surprise, then, that during our coverage of E3 last year, I was excited to cover news of SUPERHOT VR‘s announcement. A little while later, here we are with the game released, so how does it play?

In a word, sweaty. In another word, fun. In three words, I was tired. While SUPERHOT VR is incredibly enjoyable and engaging to play, do not underestimate the workout routine ahead of you. Even though the bullets are moving slowly, you’re still contorting yourself like Neo from The Matrix. I only played for an hour or two until I finished the main story mode, but that was enough to have me lying on the floor for the next 15 minutes recuperating my energy levels.

SUPERHOT VR plays exactly how you would imagine. You can grab weapons off of enemies close by, you can use your fists to knock enemies out, and of course the guns are fun to wield and aim. They shoot a lot faster compared to the standard version of SUPERHOT; whereas gun had a cooldown timer inbetween each shot before, the VR version allows much quicker shooting to deter any sense of disconnect between firing and being able to fire.

Throwing weapons and discarding held items is a much more skillful affair in the sense that you must now both aim and release things very accurately through literal physical movements and not just aiming a crosshair and pressing a button. Throwing shuriken and other objects is very difficult, but it’s satisfying once you work out the motions. In one level, I was starting off by simultaneously throwing two glass bottles to each of my sides to take out two goons, before grabbing both of their pistols in mid-air and raining akimbo-hell on the shotgunner rushing me from the front. I’ve never felt so cool in a video game before in my life. 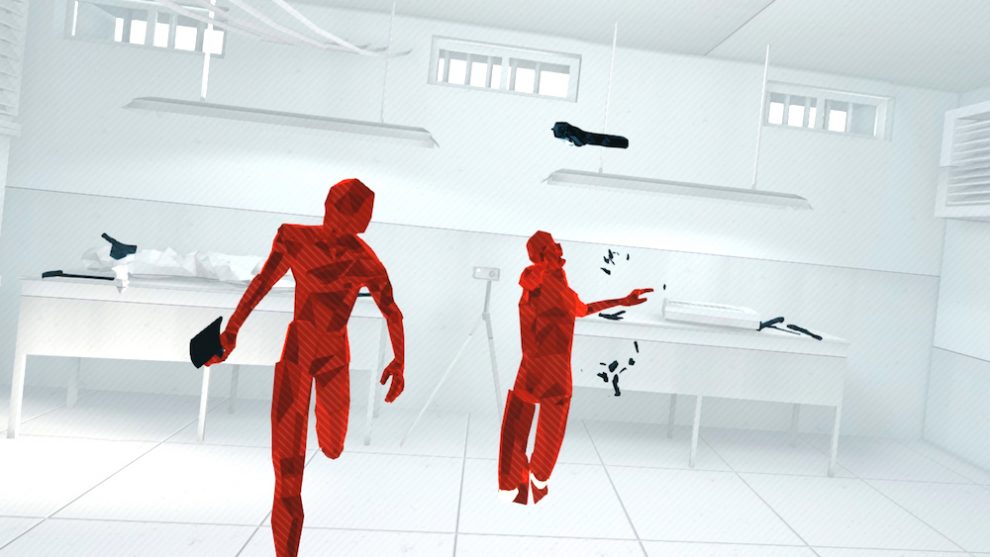 What’s really behind this rush of adrenaline is that (a) time slows down as you move slowly, so you feel as if you have super-reflexes (despite you actually just flailing body parts awkwardly and slowly around in your living room at 4 in the morning), and (b) you’re doing it all yourself which adds credibility over a mouse/keyboard/controller.

Assuming you can keep your nerves in check and not twitch around and flinch nervously, causing SUPERHOT VR to sporadically and violently advance time in bursts, you can plan and perfect each scenario like an impeccably choreographed dance routine. It’s like being able to be both John Wick and Neo at once. You can have your cake, eat it, and then be offered seconds.

I can’t stress how much fun SUPERHOT VR is when you become fully immersed. If you can suspend disbelief and put yourself in the situations the game throws you in, then this is the ultimate cool-dude, slow-motion action shooter flick simulator you can get your greasy mitts on. The original game gave you that excitement to begin with, but now you’re carrying out the actions yourself, and feel awesome doing it.

SUPERHOT VR doesn’t trim anything down or simplify anything – it’s all present and accounted for, and delivers the exact same experience, but for VR. The levels of the game are pretty much identical as the original; and you still have challenge modes after you complete the game, so you can speed-run or one-life the game in a newgame+ type of playthrough. I think it’s good that the core game hasn’t changed, as it was brilliant in its original state.

To be honest, I think this may be my favourite VR game right now.  Anything with dodging or quick movement and precise melee combat (and guns) gets my excitement building and blood pumping – I really enjoy Sword Master VR because of the same sort of dexterous movement. I think SUPERHOT VR takes the crown for this VR genre right now though, thanks to its unique, scripted situations and the fact it offers plenty of tools and options to tackle each one. If you have only enough money left over after buying a VR headset for one game, consider SUPERHOT VR to be one of them. It’s perhaps a brief experience if you don’t enjoy re-playing the levels, perfecting your dance routine and engaging with the challenge modes, but the price reflects that.

SUPERHOT VR is available on PC. We reviewed it with a HTC Vive headset.