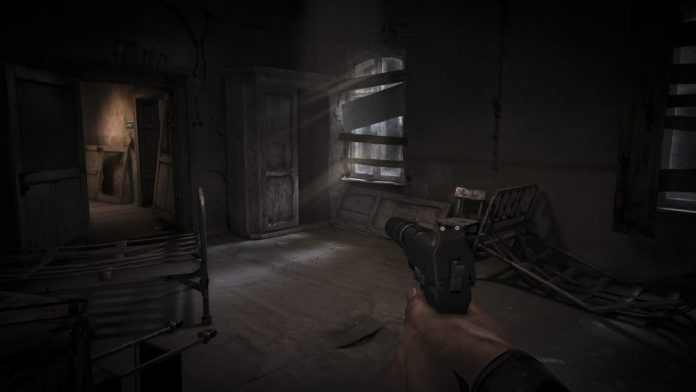 Get Even is a tricky game to review.

At its purest, Get Even is a game about discovery; of both the event at the centre, and of the true nature of the characters. Even the protagonist himself is in need of inspection. What is real and what isn’t can be hard to distinguish and you most re-arrange the fragments of data you have at hand to uncover the reality.

The way the discovery plays out is even harder to analyse as the folk at Farm 51 have used all the tools in their disposal to tell this story in a clever and complex way. Get Even‘s foundation is something akin to a walking simulator as you traverse a virtual asylum exploring every nook and crevice. You are Cole Black, and you play the game equipped with a ‘Pandora’ device, a gadget that allows you to relive your memories and explore your subconscious. The narrator, known as “Red”, has reconstructed an area of your consciousness to find out the truth about an event you witness: the abduction of a girl and her demise in an explosion.

The asylum you explore, built by your own mind thanks to Red, is filled with dozens of clues, inmates and portals to scenes of the event. The clues are retrieved by using your scan function on your smartphone. The scan locates the clue and then adds it to the overall story. The atmosphere during these sections is noticeably tense, and the brilliant score by Olivier Deriviere slowly creeps up, sending tingles in your spine. Get Even‘s ambience can quickly change to dread and tension, unsettling you in a way you’ll equally love and despise.

During your exploration of the asylum, you’ll come into contact with a number of inmates, all of whom you’ll have different interactions with. Whether you let them live, escape or die is a matter up to you and sometimes you only realise you have made that decision when it’s too late to change your mind. Puzzles are also littered throughout; they’re enjoyable if not a bit tame, but their presentation and the way that most of them utilise some kind of function on your smartphone is a nice touch. This walking simulator-esque part of Get Even is super enjoyable although I did often struggle to get my phone to lock on to some clues, taking me slightly out of the immersion from time to time. 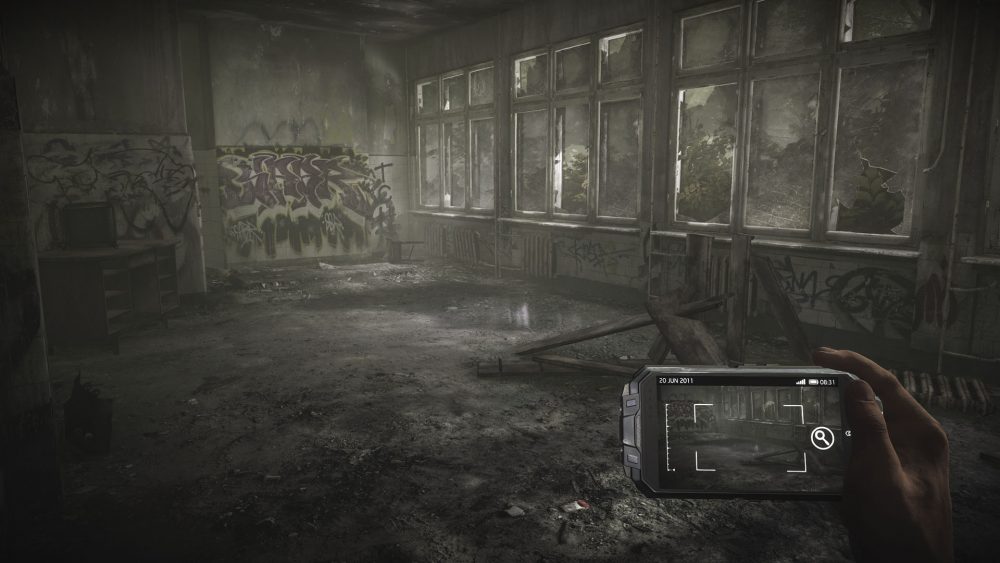 When you reach a certain point of the asylum, you’ll come across a clue that’ll jog a particular memory. Red informs you that you must let this play out so we can see the truth. Your objective is much the same: get from one place to the other and explore and discover as many clues on the way as possible. Except this time, there are guards that’ll shoot you if you’re spotted. You are specifically told that the simulation of your memory should play out exactly how the event happened, so you must not to be seen or shoot anyone if you can help it. Often, I couldn’t help it.

This stealth shooter section is extremely hard to navigate without resorting to violence – but then, that could just be me being pretty bad at stealth missions. It feels unforgiving at times, but for the most part, Get Even is fair in that it gives you alternative routes that will avoid the violence if you use your phone and scan for anomalies that appear through your camera. These anomalies can assist you by making new areas of cover appear for instance, making stealth more of a possibility.

If you do want to run and gun, you’re equipped with a corner gun. In case you’re wondering, that’s a fairly descriptive name for a gun that can… well, shoot around corners. If you want to fight you better be prepared, however, because the enemies are pretty tough; a couple of shots and you’re dead. Whichever way you decide to tackle it though, Get Even‘s visual effects in this section coupled with its wondrous score make for some incredibly dramatic and interesting moments of gameplay.

Following the stealth section, you’ll be able to visit a virtual file room that connects together everything you’ve learned so far. If you’ve managed to collect all the clues in each section, you’ll be rewarded with a secret clue – and these secret clues are pretty much necessary if you want to truly understand Get Even‘s ending. Throughout the game, you’ll be thrown into non-coherent flashbacks where you’ll need to muddle your way through a different, super surreal memory. The secret clues help you make sense of these, and thankfully, the file room allows you to revisit scenes where you didn’t manage to collect 100%.

When I reached the end of Black’s time with the Pandora device, I’d had a pretty enjoyable ride. The story overall felt quite straightforward, and it felt like a reasonable ending. However, there’s a final twist; putting you in a different perspective, you’re actually only half way through the game with much more left to experience.

From this point onwards, Get Even‘s gameplay changes pace, becoming much quicker as you run through previous scenes, only this time with new abilities, allowing you to tackle situations in entirely new ways. Rather than having to stealthily sneak past enemies, you can now assassinate them from a distance by taking over their bodies. You’ll continue to search for anomalies in each scene, all with the intent of unpicking the reality of the situation. 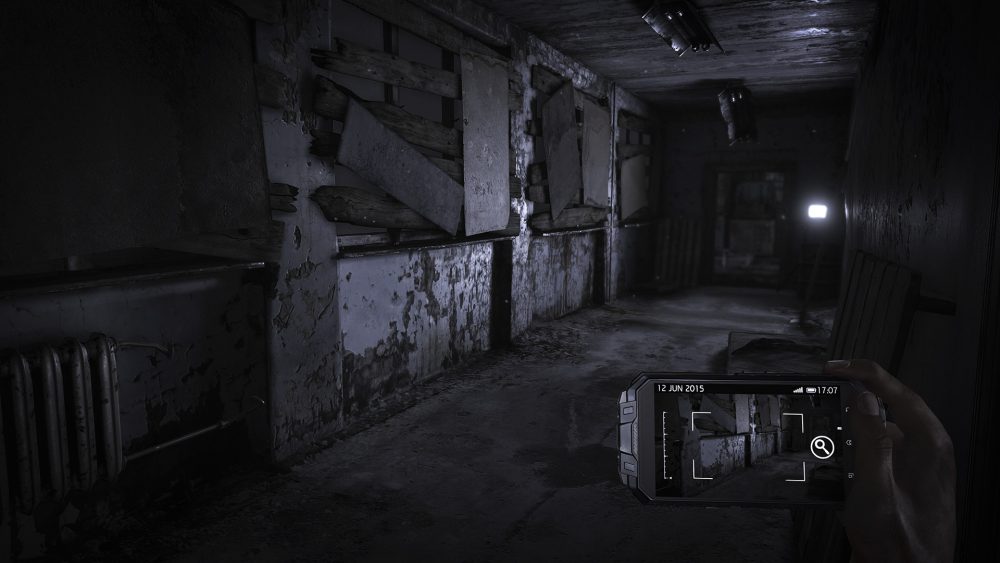 There is still time for puzzles, and weird yet illuminating memories continue to appear that you must experience slowly in an abstract manner. How well you played through the first half of the game with Cole Black will affect this part of the game. If you didn’t find out too much when playing through with Cole, the twists and turns that the game throws at you are much more impactful; otherwise, the events will likely just reaffirm your suspicions. Either way, it’s still one hell of an interesting journey – especially in the last few moments. Get Even keeps you waiting right until the very last moment for all of its incredibly surreal moments, the structure of the game and even the music to all come together and finally make sense. It’s an absolutely fantastic payoff that I’m dying to spoil… but I won’t!

More than anything else, Get Even is a game about discovery of truth and the reality of the world around you. The developers have created a very interesting world, and the brilliant atmosphere coupled with varied gameplay makes for a very worthwhile experience. Sure, some of the mechanics of Get Even could have been a little more polished or refined, and perhaps some players will be turned off by the intense surrealism employed by the game, but if you can look past that and stay for the ride, it’s definitely worth it. Get Even is an original and fun experience that’s more than worthy of your time.

Get Even is available on PC, PS4 and Xbox One. We reviewed the PS4 version. 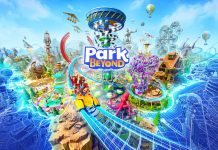