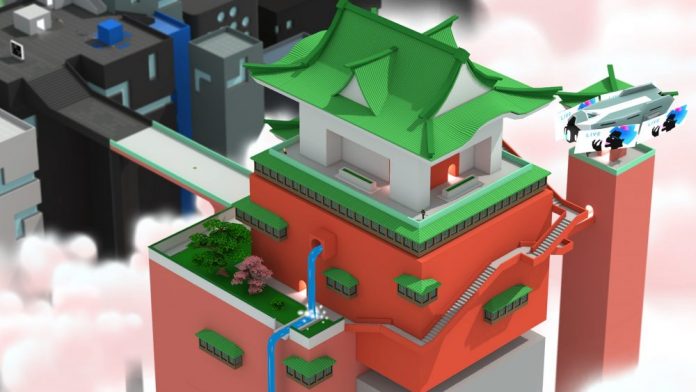 Someone gets framed for murder, they go on the run when confronted by the authorities, and then before they know it they’ve become an assassin hell-bent on uncovering a dark conspiracy. Okay, so maybe it’s not that familiar, but it is a bit clichéd. The truth is though, whilst Tokyo 42’s story isn’t anything new, it provides all it needs: context. It’s just there to validate you running around killing people, and for that purpose, it works a treat.

Developed by SMAC Games, the real draw of Tokyo 42 is its gameplay. Touted as Syndicate meets Grand Theft Auto, it actually feels like there’s more to it than that. There’s a hint of Hotline Miami in there, a touch of Mirror’s Edge, and more than a sprinkle of Hitman too. I think you’ll agree that’s quite a concoction, and thankfully, it mostly works.

Because of all of its influences, Tokyo 42 is a game that defies genre. It’s an open-world isometric twin-stick shooter with stealth, a high degree of mobility and scenarios that often feel as much like a puzzle as they do an opportunity to shoot shit up. That’s what makes it so interesting though. Well, that and the fact that its world is so teeny tiny, captivating you with its bold colours and simplicity. 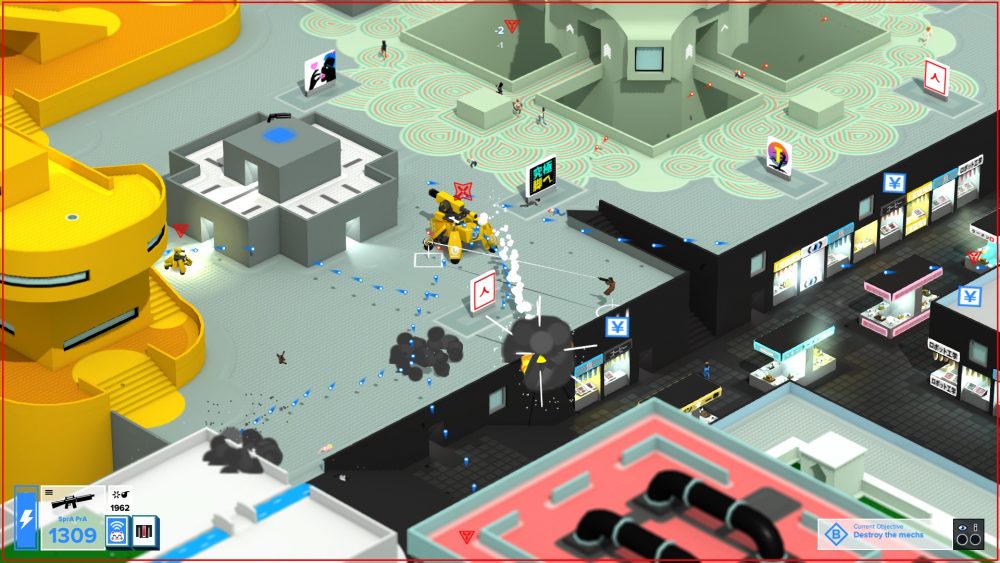 You pick up contracts and fulfil them with ruthless efficiency, but it never feels violent, just playful. Often you’ll need to take out a target in a very specific way, such as with a katana or a grenade, but Tokyo 42 is at its best when it’s not being so prescriptive. Whether it’s using your favourite weapon to riddle your target with holes or leading a bunch of goons into a rival faction’s territory to start a turf war, there are plenty of ways to get the job done in Tokyo 42 which keeps the gameplay fresh and rewarding. Though, it’s not easy.

Often, reaching your target is more arduous than dispatching them, with guards being fairly alert and converging upon your position quickly when discovered. They’ll end your life in a flash if you don’t keep your wits about you, but luckily, checkpoints are plentiful, taking the edge off contracts that do become a case of trial and error. Unfortunately though, it’s Tokyo 42’s camera that will prove to be your biggest challenge in just about everything you do.

Zoomed out so far as to make all the inhabitants of its micro version of Tokyo as small as ants, seeing exactly what’s happening in Tokyo 42 is sometimes harder than it should be. The disguise system feels redundant when it’s hard to work out what your character looks like in the first place, while skyscrapers and other buildings will block your view as you move around, requiring you to rotate the camera in 45 degree increments to get a better view. Being brutally honest, managing the camera becomes awfully tedious, but yet I still found myself soldiering on to complete one last hit.

There’s something about Tokyo 42 that makes it quite engrossing. Playing it often feels like hard work due to the annoying camera, but it’s strangely rewarding. You feel a great sense of satisfaction when you pull off a successful hit without being spotted, and as you climb the assassin ranks you get access to better weaponry and equipment  that enables you to be more creative. Add in a fast travel system that allows you to move around the world with ease in the moments of downtime, and it’s hard to not be charmed.

Tokyo 42 is available now on PC and Xbox One. We reviewed the Xbox One version.