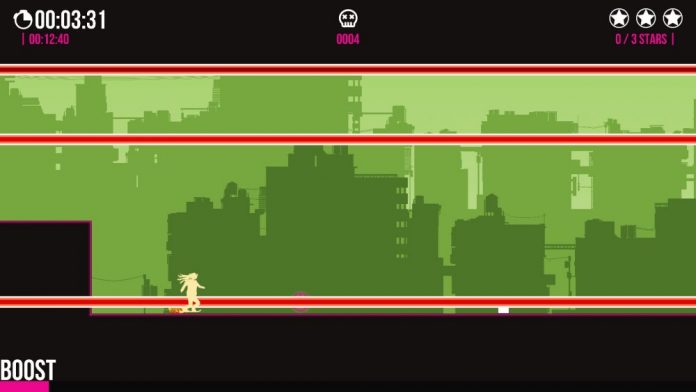 As much as I like AFTERGRINDER, IT MAKES ME WANT TO TYPE LIKE THIS ALL THE TIME.

It’s maddening – infuriating in fact – but yet it’s fair, making you go back time and time again to try and unlock a new level or two. And with levels being short affairs, restarts being immediate and the controls being wonderfully responsive, you will go back to try again and again and again. Still, you’ll probably fail. Really, if you’re a glutton for punishment, if you’ve committed sins you want to atone for, or if you’re a masochist, AFTERGRINDER is the game for you.

It has the loosest of stories, which even the game itself dismisses in its intro – AFTERGRINDER is all about the gameplay. In each and every one of AFTERGRINDER‘s 90 levels your task is to simply ovoid obstacles as your skater moves from left to right. The levels are spread across three worlds, each with their own methods of torture; walls, platforms, lasers, drones, barriers, reverse control fields, portals – the list goes on. All three worlds are unlocked from the outset, allowing you to jump into any one of them immediately to progress through their levels. Chances are though, you may never make it past a handful of them.

“AFTERGRINDER is made to make you rage, and it does. It really is monstrously difficult.”

Simple but challenging is AFTERGRINDER‘s ethos. All you really need to worry about is pressing up and down to make your character ‘flip’ or duck under obstacles. Their gravity defying antics will leave your head spinning, however, especially once things really get going and you’re met with a barrage of obstacles that is truly just evil. When you feel like you’re able to handle it, you can also boost to increase your speed, but its use is metered.

Often, just reaching the end of a level feels like a gargantuan achievement, though perfectionists will want to collect the three stars that each level offers. If somehow you have supernatural abilities and find AFTERGRINDER not that challenging, your level completion time is recorded for you to measure up your performance via leaderboards, allowing for some long-term challenge and competition. My hat comes off to you if you are one of those people – you have more skill and patience than me.

AFTERGRINDER is made to make you rage, and it does. It really is monstrously difficult. You know it’s all down to memory and skill though, so you don’t particularly get mad at the game, just at yourself for not being able to do it. Initially, there’s only one skater available to play as: The Lady. Essentially, playing as The Lady is playing the game on medium speed, and therefore medium difficulty. Even then, she’ll probably become too hot to handle pretty fast.

Fail a few times and you unlock The Dude. This guy is slower, and therefore using him makes the game a bit easier. Emphasis on ‘a bit’. And then there’s The Shark. In honesty I haven’t unlocked him. He just sits there taunting me on the level select screen. Faster than both The Dude and The Lady, I can’t imagine ever playing as him – the anger levels in the room would be raised just too high. I’d probably burst out of my clothes like the Incredible Hulk.

“If you have inhuman hand/eye coordination or really do like inflicting inner turmoil upon yourself, then you probably should consider picking AFTERGRINDER up. You’ll probably get a kick out of it, you sick bastard.”

There’s not really much more to say about AFTERGRINDER. You can see that the visuals are basic yet nice on the eyes, and if you’ve not watched a trailer for it, let me tell you that its techno soundtrack gets your foot tapping nicely as you endlessly skate to your doom.

Ultimately then, if you have inhuman hand/eye coordination or really do like inflicting inner turmoil upon yourself, then you probably should consider picking AFTERGRINDER up. You’ll probably get a kick out of it, you sick bastard. For the majority of gamers, however, it’ll probably just make them want to put their fists through their monitors and their foot through their PCs. You have been warned.

AFTERGRINDER is available on PC.