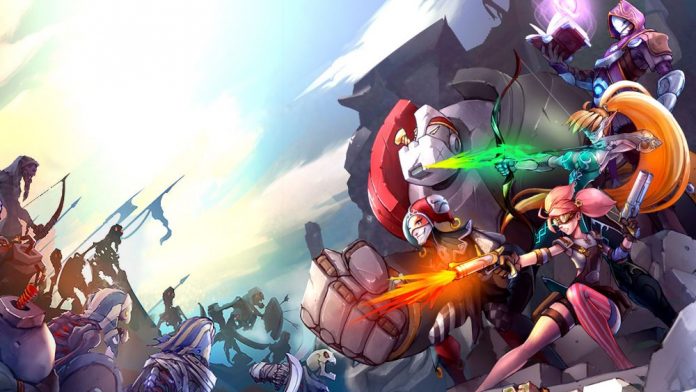 Every PSVR title that comes out inches closer to being a complete title.

A few hidden gems rest among the others, and Ancient Amuletor is the latest to test its mettle. There’s a lot to like, but it falls short of being a must buy PSVR title.

Combine tower defence, VR, and a splash of hero shooter and you’ll get Ancient Amuletor. Like similar PSVR titles, you’ll have to use the move controllers to guide yourself through the game. It’s a fairly active game, with each character requiring a decent bit of movement to use their full range of skills. The gameplay itself is quite smooth, and actually a good bit of fun. Unfortunately, it is short lived and bogged down by a lack of depth and variation. Despite its best efforts, Ancient Amuletor isn’t as magical as the world it takes you to.

When the action gets under way, it’s a run-of-the-mill tower defence game. Each map – of which there are two with two levels a piece – has a number of crystals which you must defend from enemies such as archers, skeletons, soldiers, mages, and bomb-carrying men. Between the crystals are platforms, which you can teleport to, giving you a better vantage point for each crystal. One issue with this process is that the POV each platform gives you isn’t always the one you’d expect. Some have you looking directly at the crystal, others don’t. It’s a little frustrating, especially when you’re in later waves. Reaching the second level of each map grants you a boss fight, which varies the gameplay enough to feel different.

The hero selection is slim in Ancient Amuletor, with four in total. There’s Lia (Archer), Katie (Gunner), Harry (Mage), and Park (Puppeteer). Lia has the best range and accuracy, but also requires the most physical exertion. Katie is probably the easiest to use mostly because her guns have a good spread and they’re easy to point and shoot. Harry is best for crowd control, as his attacks have splash damage and Park is the most unique, as you throw a golem out and swing wildly to control his attacks. Each character brings a different play style and you can even switch on the fly. All around, playing Ancient Amuletor is fun but can be a bit exhausting, especially given its lack of depth. There are a lot of little things going on while you play, too. 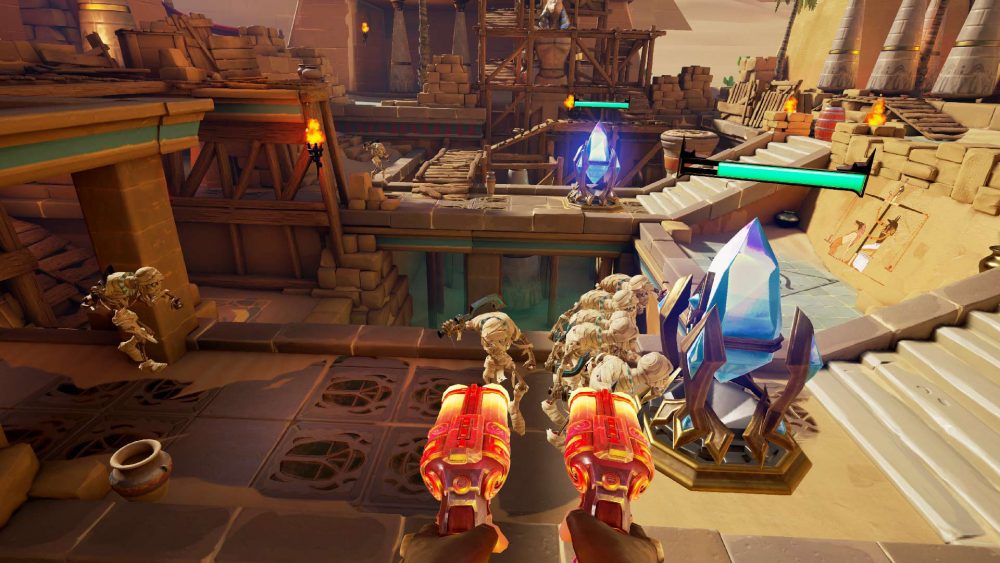 Killing enemies during the game has the potential to drop power-ups. You can find ones that slow enemies, increase your damage, or kill all active enemies. Each hero also has their respective special abilities. The archer has the ability to lock onto several targets and then release an arrow that hits all targeted enemies. The gunner gains the ability to rapidly fire, the mage can throw an ice attack with a large AoE that freezes targets and the puppeteer has a spin attack with a wide range. The abilities are powerful and fairly easy to charge (just kill enemies) but they are short lived. Even on harder difficulties, you’re hardly ever swamped enough to be wishing you had a special ability. The boss fights are interesting, and a welcome change, but not long or difficult.

Unfortunately, the extended time spent with Ancient Amuletor is less enthralling than the first few rounds. There just isn’t enough depth to keep you coming back, hero/enemy/map variation leaves you wanting, and the end game is a bit small. Of course, there’s co-op which can spice things up but even then, the core mechanics are the same. Boss fights, while different, aren’t intense and exciting. A sense of urgency is never truly found, even when the later rounds show their faces. It’s definitely refined to the point that it is smooth and does its job, but I doubt I’ll find myself crawling back.

The whole package that comes with Ancient Amuletor fills several holes but leaves a lot of gaps. It’s fun and action-filled, but that flame fades away within a few hours. There appears to be more content on the way, with characters and maps locked behind the immortal words “coming soon”. It’s a responsive, smooth experience, but Ancient Amuletor lacks the depth it needs to be a truly worthwhile PSVR title. Each hero is unique and offers a good amount of fun, but the combination of unimaginative enemies and short levels rushes the experience to a close. While it’s certainly not the most bare bones PSVR game on the market, it falls a few pegs down the ladder.

Ancient Amuletor is available on PS4 and PC. We reviewed the PS4 version.