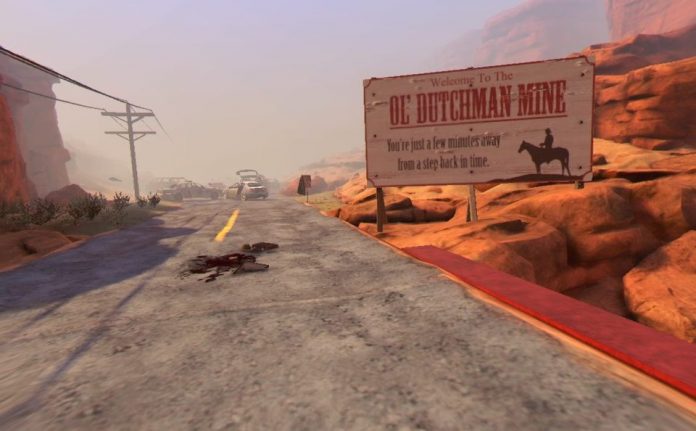 Your first few minutes with Arizona Sunshine are likely to be a breath of fresh air.

I mean, you’re probably used to slaying zombies by night, shrouded in darkness or in the depths of some spooky mansion, so to be battling against the undead in literal Arizona sunshine makes for something of a welcome change. In this respect, the name is imbued with a certain level of responsibility, as that sunshine adds a surprising amount of character to the game and offers some optimism for our protagonist.

Playing as the lone survivor of an indeterminate zombie apocalypse and beginning your journey in the red and rocky hills of Arizona, you’ll set off to look for supplies and survivors while hunting the source of a faint radio transmission, with just your thoughts and the occasional zombie (or “Fred” as your character semi-affectionately refers to them) for company.

Although light on conversation, these zombies are heavy on the whole “brain-eating” thing, so of course taking weapons on your travels is a must – although which weapons you favour will depend, to some extent, on your controller setup. All three control systems are available to you when playing Arizona Sunshine, these being the standard DualShock 4, the PlayStation Move motion controllers or the newest addition to PSVR’s virtual weapons cabinet, the PSVR Aim controller.

Playing with the Aim controller affords you more dexterity when moving, improved accuracy and greater immersion. It’s also the best way to play with two-handed weapons, but current availability of the peripheral (or lack thereof) and its high price point make it tough to justify as yet, with Arizona Sunshine only the second title to support it.

The Move controllers allow you to dual-wield pistols and other single-handed weapons like an Uzi, pistol or six-shooter and this makes you generally feel like a bona fide zombie-slaying badass. In fact while using this system, I did occasionally feel like Tallahassee in Zombieland as he staves off the undead from his prize-booth in Pacific Playland, which was pretty cool.

The final option is of course using the standard DualShock controller. It affords you far better movement via the analogue sticks, but rips any level of immersion out of your experience as you try to raise the light-bar to aim down the sight of your gun. 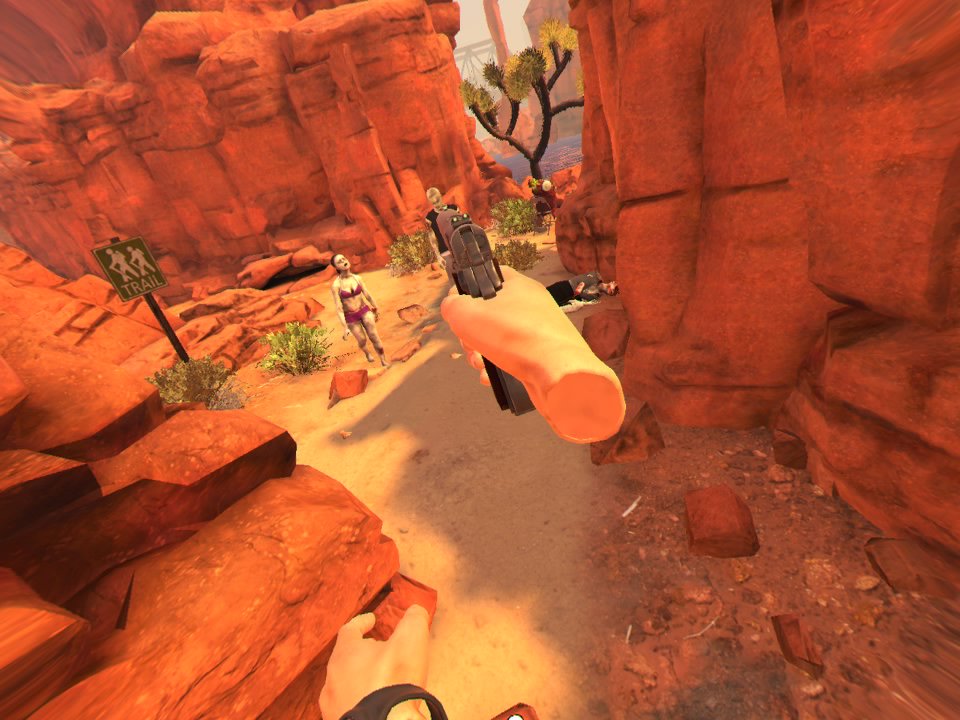 Each of these control systems also offers a wildly different gameplay experience. Moving around the game world is confusing to begin with, especially with the Move controllers, as you can either turn your head to look around, or tap the face buttons to rotate left or right. Movement itself can only be controlled by “teleporting” which means looking and aiming an arc to where you’d like to be, then pressing X. This became very disorienting as I’d often end up facing away from the camera with the Move controllers in front of me, so the camera wouldn’t be able to track them; especially terrifying if a swarm of zombies is bearing down on you and you can see your hands drifting off into the distance. Given time, though, it becomes easier to accurately carry out the action you want.

Away from the control woes of PSVR though, Arizona Sunshine has a lot to be positive about. It’s straight-up fun to play, and the game’s sound design is particularly noteworthy, which does plenty to enhance the experience. Decent voice acting from the main character helps to bring the world and your struggle within it to life, but it’s the sound effects that really stand out. The moans, groans and shuffling footsteps of begrudging zombies are clearly defined enough to pin down where your foes are, even when you can’t clearly see them through shrubbery or abandoned cars. Pop on a set of  decent headphones and the 3D sound comes alive with braying zombies all around you, with things becoming nerve-wracking pretty quickly.

While it may not offer the premium thrills that you’ll find in Resident Evil VII: Biohazard, being low on ammo and hearing the distinctive shuffle of a long-dead truck driver approaching behind you is easily enough to get your nerves jangling, even if you never feel the complete disconnect from reality that you get in a more intense experience.

Within the world of Arizona Sunshine, there are plenty of opportunities to scavenge new ammo from the vehicles strewn around the place or from desks, cabinets or shelves in the occasional dwellings you’ll come across. Not every item serves a purpose, mind you, which is a little unfortunate. In the trunk of one car I found some sorely-needed ammo which I gladly picked up and added to my belt, but next to the ammo box were several tin cans. As an aficionado of stealth games, my reflexes kicked in: “If I throw one of those over there, I can distract them and get the drop on these guys!”. Strangely though, no matter how many cans I threw, or how close to an enemy they landed, they had no effect and I found this to be the case with 90% off the things you could pick up. Even worse was when the ambush I’d carefully laid with a few strategically-placed fuel cans failed to explode when I shot them. Red barrels will explode when shot, but that’s your lot. It seems a real shame, too, as more interaction would add an extra tactical element to an otherwise straightforward, point-and-shoot combat system. 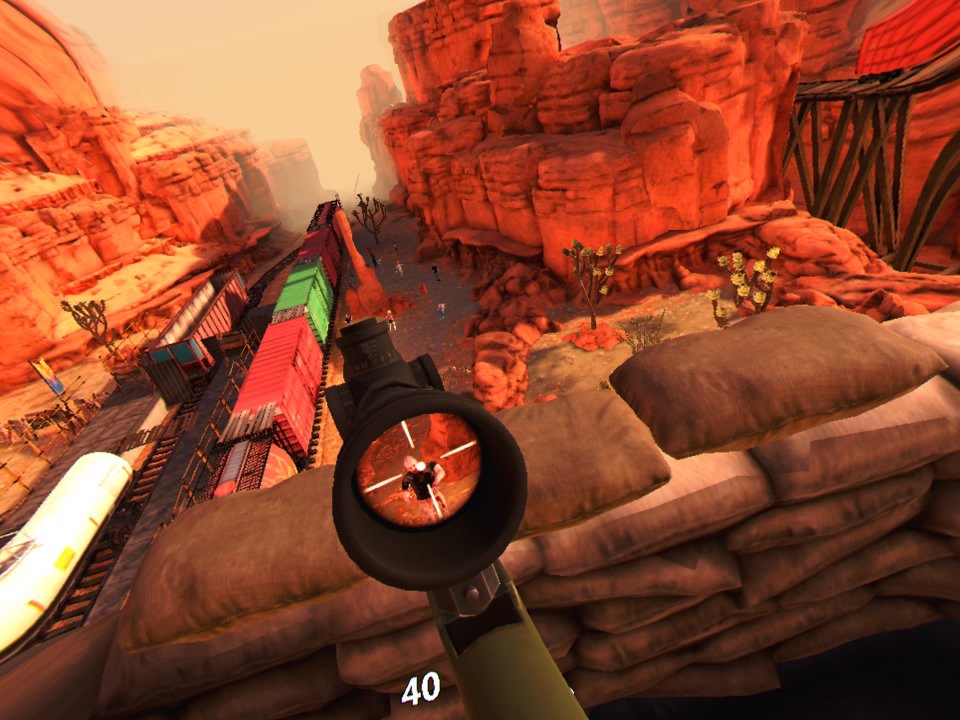 Arizona Sunshine’s main weakness, though, is that it’s simply not the most aesthetically pleasing game. Its environments are enjoyable (mostly due to the novelty of shooting zombies in the sunshine), and the weapons look great, especially when close up and aiming down the sights, but textures are noticeably bland and some of the vehicles look like late PlayStation One-era models with paint just a single shade and seats that look like they’re made of cereal boxes. Fortunately, the gunplay isn’t affected, with your enemies looking suitably meat bag-ish, and damage from your bullets being accurately displayed by decapitated limbs, bullet holes or even full-on, squelchy head explosions, which are so satisfyingly visceral.

With PSVR receiving a moderate showing at Sony’s E3 conference this year, there’s plenty to look forward to for the platform, but if you’re looking for the next title to pick up right now, Arizona Sunshine will likely satisfy most players, provided you can stand the occasionally squiffy controls and disappointing look of the environments. The story, while simple, is punctuated with enough commentary from your character to make it enjoyable and when everything clicks into place, the gunplay does feel great. At a mid-range price point, it may be asking a little much for the game’s 3-4 hour playtime, but there’s plenty of action packed into that time to make Arizona Shunshine a worthwhile addition to your VR library.

Arizona Sunshine is available on PC and PS4. We reviewed the PS4 version.