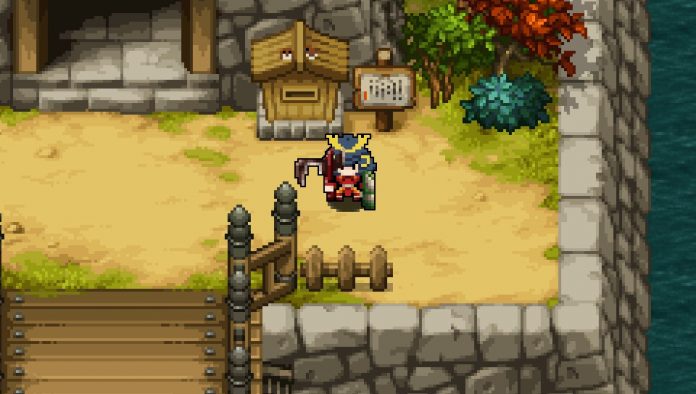 I’m not one that has dabbled in a lot of role playing games. It’s not because they don’t have a lot of things going for them; it’s because I’ve never been able to really understand them. Cladun Returns: This is Sengoku! is a great game to introduce beginners like me to the RPG genre.

Cladun Returns: This is Sengoku! is a role playing dungeon crawler game based in the Japanese Sengoku period. Developed by NIS, Cladun Returns, a series that started in 2010, has since been known for its classic pixel graphics as well as its difficult but ingeniously fun gameplay. Much of the gameplay is based in ever-changing dungeons that get more difficult as the game progresses.

At the start of Cladun Returns: This is Sengoku! you wake up in a strange world called Arcanus Cella with no memory of who you are or what you’re doing there. A stranger named Yukimura approaches you to tell you that Arcanus Cella is an area where souls of the dead go that have unfinished business with the living. Yukimura tells you that you must assist these lost souls with their unfinished business by going into dungeons and escaping in one piece. At the end of each dungeon a soul is released, but, something goes wrong, and even with their final wishes granted the souls are unable to leave Arcanus Cella. Yukimura tells you to continue releasing the souls until he figures out why they are unable to leave.

I’m definitely a sucker for character creation, so any game that lets me make my own character is starting out great in my book. At the beginning of Cladun Returns: This is Sengoku! you’re able to choose between a male or female character before giving them a look and personality. Most importantly, you’re able to decide your character’s dialogue pattern by giving them a certain trait. For example, if you decide to make your character shy they might say something like, “Oh um…sure, I don’t mind helping you.” If they are gluttonous they would probably go for something like, “Yeah yeah, dungeons, whatever. Are you gonna eat that?”. Whatever you choose will determine how your character will act for the rest of the game.

Once players are ready to go out into the world they can begin to enter dungeons. Each dungeon holds a wide variety of monsters, with the final goal being to reach the exit alive. At first, the dungeons might seem way too hard for you – a bit of grinding to level up may seem necessary – but as you get upgrades for your character and build a party of friends, they don’t become so daunting. Plus, you have the easy to use Magic Circle helping you along the way. 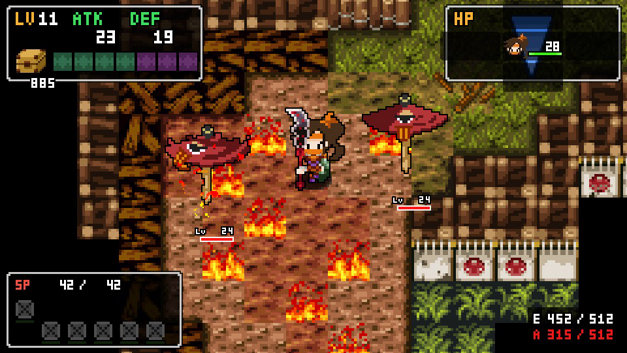 The Magic Circle is a mechanic that allows players to bring along a whole party of people to the dungeons, giving some positive features and some negative. If you decide to bring along a party of three, for example, the first person that you place in a vassal (the open spots inside of the circle) keeps their stats the same, but the second person that you place has minus 60hp. This makes it very important where you put the people in your party. You don’t want someone with low hp losing even more hp so it’s very important to plan accordingly. There are also even more ways to buff your characters including different artifacts for them to equip. You can only have a certain amount equipped at one time though, so again, you have to strategise for the best outcome. Once you figure out what works best for you, you’ll feel much more comfortable going into dungeons.

One of the bigger problems that I had with Cladun Returns: This is Sengoku! is that the story moves very slowly at the beginning of the game. It does redeem itself as you get further into the adventure, however, but if you’re not patient enough to grind your way through the dungeons to get to the good parts of the story, this one might not be for you. The only other problem I found myself having was feeling like the dungeons at the beginning were pretty repetitive, but if you stick with it, the puzzles and monsters change up as you continue on.

Despite its minor issues, I had such a fun time playing Cladun Returns: This is Sengoku! that it might actually convince me to give some other RPGs a try. Cladun Returns: This is Sengoku! has awesome gameplay, great character creation, a catchy, old fashioned soundtrack and a thriving world full of surprises to find. If you’re looking for an RPG to fill the void until the next big title is released, be sure to check it out.