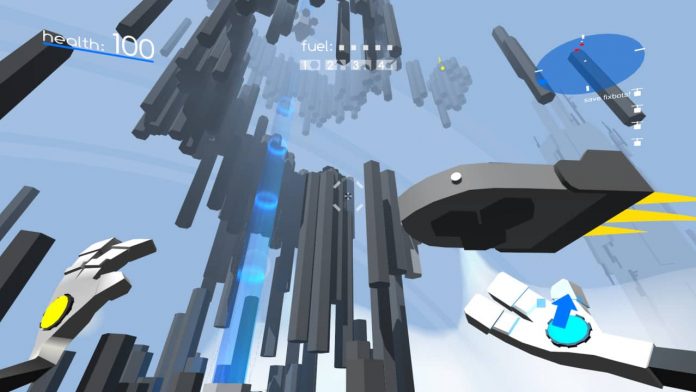 Within seconds of Cloudbase Prime starting, I instantly knew where we were going in terms of tone.

In a nutshell, it has the narrative style of Portal, mixed with the glove mechanics of Q.U.B.E, with a hint of Lovely Planet–style high-air jumping and shooting. The visual style also reminds me a little of Ubisoft’s Grow Home. I’m still not entirely sure of the context behind Cloudbase Prime‘s story, but you’re basically saving good robots from bad robots… or something. It’s hardly Dark Souls , but it’s as shallow or as deep as you make it for yourself.

Cloudbase Prime‘s world is suspended in the middle of the sky, and made from hexagonal-style pillars that lineup together to create small clusters of islands. You can use your glove to raise or lower these pillars to a minimum and maximum height relative to their starting position. If you’re falling, you might be able to lower a pillar quickly enough to clamber on top, and raising the platform will launch you into the air for some aerial combat.

“Cloudbase Prime has the narrative style of Portal, mixed with the glove mechanics of Q.U.B.E, with a hint of Lovely Planet-style high-air jumping and shooting.”

Once in the air, you can activate your hover ability, which lets you float around and dodge projectiles from enemies, giving you just enough time to deal some damage before co-ordinating a safe landing. These are the moments where Cloudbase Prime feels most like Lovely Planet, because it’s got that arcade-like quality of simple shooting mechanics. Mixed in the aerial combat and focus (but not necessity) on staying airborne as much as possible, and the game starts to take on its own unique identity in the process.

Cloudbase Prime‘s narrative is what gives away its Portal inspired-nature. The light-hearted quips from characters and comedy timing of dialogue draw very obvious parallels with the dark but humorous nature of Portal. Cloudbase Prime is squarely in comedy territory when it comes to narrative. The plot points are very by-the-book, and the expected twists and turns do occur, but the fun delivery of it makes up for its predictability. That predictability can also be seen as a testament to how well the story’s flow and pacing is, and how easy it is to read and get a feel for thanks to well-constructed moments of presentation and set-pieces.

Sometimes the dialogue reveals the amateurish nature of the game’s development, and some robot-filter voices do sound like they’ve been recorded at a rehearsal in someone’s garage (which wouldn’t surprise me here…). That’s not to say it’s bad quality; clearly the humoured approach of the game makes sure that production-quality doesn’t really affect the experience. Naturally, you’re going to enjoy Cloudbase Prime more if you can get on board with that silliness. Depending on your outlook, the amateur feel of some of the game’s feature can have a Monty Python effect and make the experience more fun and enjoyable! 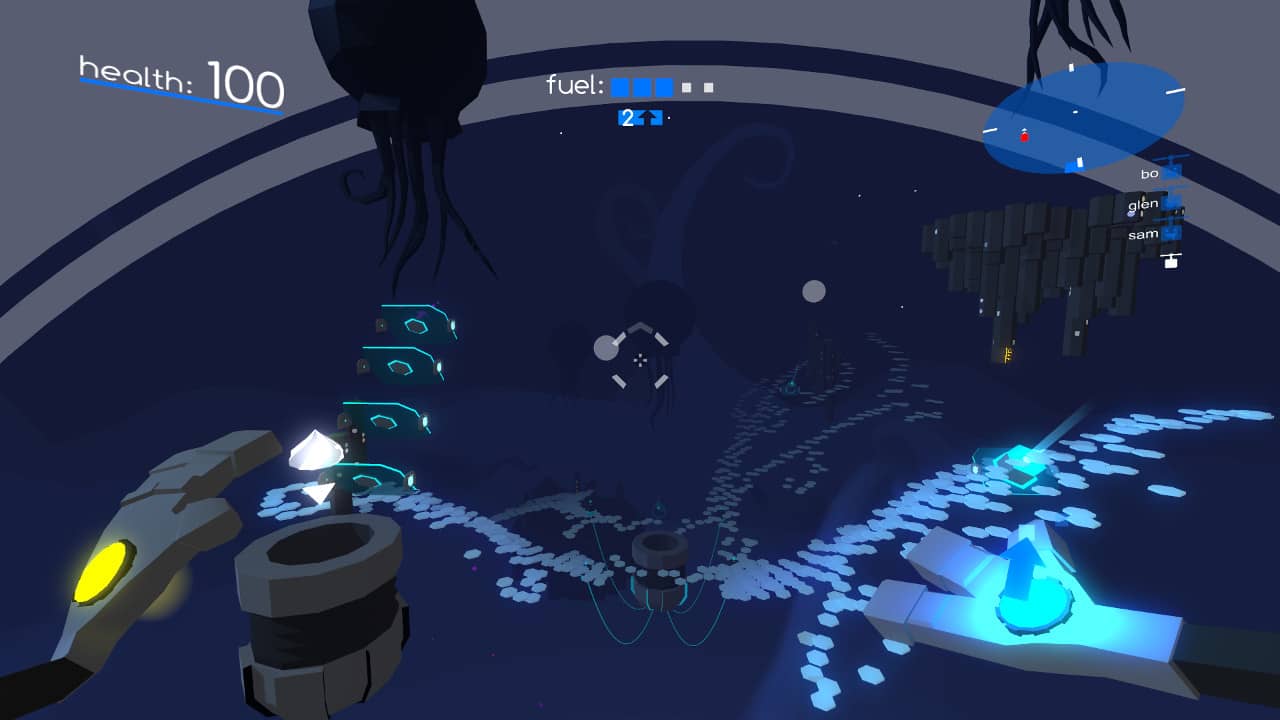 Despite having simple models and basic visuals, the artistic styling of Cloudbase Prime and its themes are so strong that it’s easy to overlook its visual flaws. Later levels of the game showcase a lot of variety, and enemy types are very easy to read and understand the behaviours of. If you can get beyond the initial hurdle of the first couple of levels having a very simple white-themed design, then you’ll begin to see the unique game that lurks in the near-distance.

And in many ways, persevering through the first couple of levels of Cloudbase Prime paid dividends. What started out as a very simple experience that seemed like it could be just another quickly-rushed Unity engine indie game actually began to showcase a lot of good game design and became very enjoyable to play. It became challenging with a well-implemented difficulty curve that forced me to pick up and use the mechanics as they were presented to me. It layered itself correctly in a way that made sense and didn’t overwhelm, and enemies gradually increased in size and numbers. If you can ignore the telltale bugs and quirks an indie game usually has, Cloudbase Prime is a deceptive little game that actually has a lot going for it.

Boss fights are well structured and varied; my favourite being riding on top of a dragon, sending back missiles lodged on top of it back to the boss. I’ve actually walked away from the experience of playing Cloudbase Prime having some fond little memories. It might not have been quite as impacting as a AAA title like Portal, but on the whole, it has that same style of charm and humour that makes it stand out from the crowd.

“With a well chosen soundtrack, uniquely delivered dialogue, and strong visual styling, you don’t need to compete with AAAs to make something worthwhile.”

The soundtrack is easily the best part about Cloudbase Prime. I found myself hooked on more than one song, and it definitely created the mood. So few indie games manage to secure a good soundtrack that fits the game. Whether it was composed or grabbed off a royalty-free website, good decisions were made in pairing tracks to the particular stage of the narrative or theme of the level.

All in all, I’m pleasantly surprised with what Cloudbase Prime held in store for me. What started off with a heavy sigh turned out to be quite charming and got better as I went further in. Games like Cloudbase Prime, Grow Home, and Lovely Planet show that small teams of developers can accomplish quite a bit even with simple shapes and colours. With a well chosen soundtrack, uniquely delivered dialogue, and strong visual styling, you don’t need to compete with AAAs to make something worthwhile.

Cloudbase Prime may be a poor man’s Portal, but it’s Portal-like nonetheless, and that alone makes it a title worth checking out.

Cloudbase Prime is available on PC.