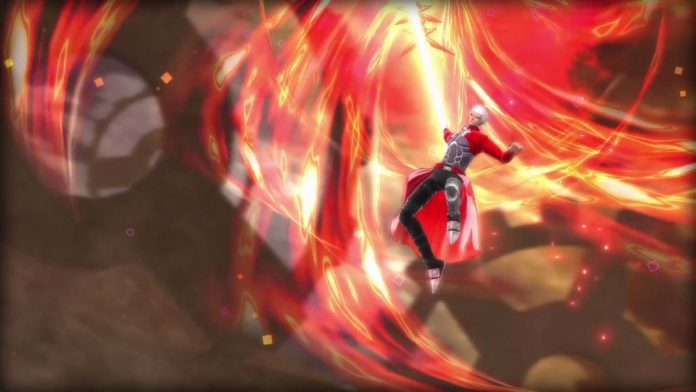 Released on PlayStation Vita and PlayStation 4 earlier this year, hack and slash title Fate/EXTELLA: The Umbral Star is now available on Nintendo Switch.

It includes many costumes that were previously released as paid DLC, but other than that, there’s not much to distinguish it from previous releases.

Set within the popular Fate universe, it’s got a typically crazy story that you’ll need to be a fan of the series to truly understand and enjoy, though it’s not totally impenetrable for those jumping in blind. It basically boils down to a number of factions fighting for dominance of a digital realm known as SE.RA.PH, which would be fairly easy to follow if it wasn’t for the reams of over exposition that comes of the many characters’ mouths that you’ll recruit and oppose.

For many, the main draw of Fate/EXTELLA: The Umbral Star will be the fast-paced action it provides. Essentially, it plays like a sci-fi themed Dynasty Warriors, with you taking control of a number of historically named servants to do battle on a grand scale. You’ve got the usual range of standard and heavy attacks which can be mixed up to form combos, the ability to block and dash to avoid or negate attacks, and even a screen-clearing musou-like special move called an Extella Manoeuvre. In addition, however, characters also have the ability to transform for a limited period of time, often granting them a new moveset and enhanced stats, as well as a one use only Noble Phantasm attack should they find and collect three Phantom Circuits. It allows the combat to be more varied than what’s usually found in a Dynasty Warriors game, though it still gets repetitive pretty fast.

Rather than battles taking place on a singular open map, Fate/EXTELLA: The Umbral Star‘s battles take place across many small sectors that are isolated from each other. To move between them, you simply move to the exit point in your current sector that will take you to your desired location, then push the B button to dash to it. To emerge victorious in any given battle, you need to gain control of sectorss in order to obtain regime keys. Once you’ve gained enough Regime Keys to fill the Regime Matrix – basically a morale bar that sits at the top centre of the screen – the boss will appear for a showdown, and upon beating them the battle will end. 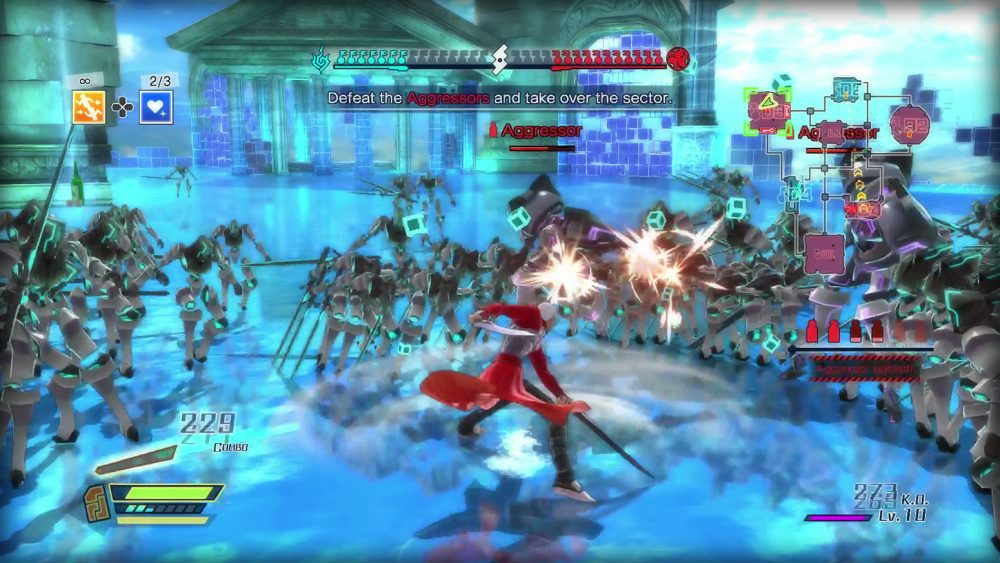 To take control sectors you need to defeat hordes of generic enemies, and I really do mean generic. The rooms are often cram packed full of identical-looking robotic foes that you need to cut down like chaff. Defeat enough of them and more powerful foes known as Aggressors will appear, and once you’ve beaten all the Aggressors a sector contains, it becomes yours. Control of sectors can be disputed, however, with enemies known as Plants Programs sometimes appearing that spew forth enemies that will move to invade occupied sectors. It’s a system which requires some modicum of strategy to succeed, especially when playing on normal or hard difficulty. The bosses, too, can propose a bit of a challenge at times, which makes a nice change from fighting the braindead fodder along the way.

Enriching the experience somewhat is the reasonable amount of customisation you have with regards to your Servants. As you play Fate/EXTELLA: The Umbral Star, you acquire QP, a currency of sorts which can be used to craft new Mystic Codes, though some also require upgrade parts. You can equip only one Mystic Code, and they outfit you with up to four Code Casts, or skills, which can be used in battle – such as the ability to heal or switch to a sub-servant. You’ll also gain many Install Skills as you play which can be equipped to modify the element of attacks and enhance your stats. You’ll need to develop bonds with your Servants in order to use more than one however, either by selecting certain dialogue options or using Code Casts frequently in battle.

In terms of content, I feel that Fate/EXTELLA: The Umbral Star has plenty to keep you occupied. The Main Story mode has three story arcs to follow, each featuring a particular Servant. As you progress, you also unlock characters for use in Side Story mode, 13 of them, in fact. And then there is of course a Free Battle mode, allowing you to play as any unlocked character in any battle you’ve already completed. Those who seek to see everything Fate/EXTELLA: The Umbral Star has to offer will no doubt find tens of hours of solid entertainment within.

On the Nintendo Switch, Fate/EXTELLA: The Umbral Star performs very well indeed. Granted, it’s not the most technically demanding game out there, but its anime styled visuals are still appealing to the eyes. It’s got a nice soundtrack too, though it’s a shame that much of the Japanese-only dialogue during battle isn’t subtitled.

All in all, Fate/EXTELLA: The Umbral Star makes for an entertaining hack and slash experience which feels right at home on the Nintendo Switch. It’s admittedly a little pricey at £49.99, but for those looking for some Dynasty Warriors style action, it fits the bill quite nicely, and those familiar with the Fate franchise will also get a kick out of its story which features many familiar faces. As per the norm for these types of games though, repetition is bound to turn off some players relatively quickly, so be aware. 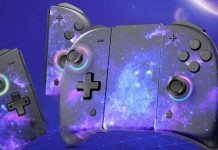