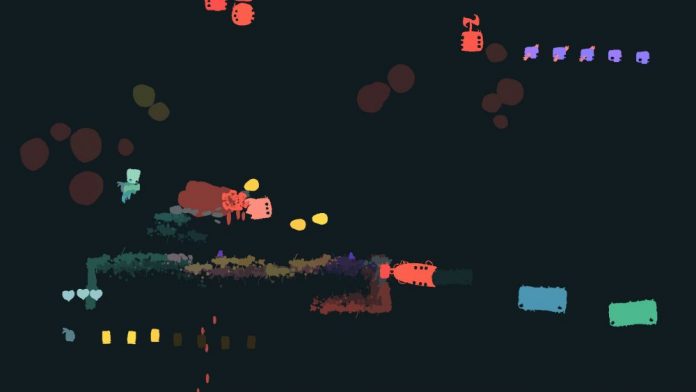 Imagine for a moment that you’re Ikk; a strange humanoid creature whose skeletal head has a tendency to fall off.

Your best friend Sally, a land whale, is unfortunately down in the dumps for some reason. What do you do? Now, don’t think too long about it, I’ll just tell you. You go on an adventure to shoot things and cavort with Death himself in order to find a trinket that may raise Sally’s spirits. Ikk is a good friend like that, see? And so begins GoNNER, a 2D platform/shooting game so devilishly difficult that it truly deserves its roguelike status.

Dropping you into a dark world every time you play, literally – its visuals are essentially just pastel-coloured characters and outlines of levels on a black background – GoNNER is the type of game in which death comes around very frequently. It’s supposed to be that way though – at least until you’ve started to master it – and with levels being procedurally generated, you don’t mind so much as you’re presented with a new challenge every time you play.

As little Ikk, you navigate each level from left to right, climbing up walls and either jumping on the heads of your enemies or shooting them with whichever weapon you have available to defeat them. To progress to a new level you jump into the mouth of a strange worm-like creature to emerge in pastures new, ready to take up the challenge once again.

It’s a simple and familiar formula, made to feel refreshingly unique by the game’s abstract visual style and general air of mystery. Free of any dialogue, tooltips or tutorials, GoNNER makes you fend for yourself. Throughout your adventure you’ll discover a small arsenal of alternative heads, weapons and abilities, but what they do will never be spelled out for you; you’ll have to just try them and see.

This ambiguity is both GoNNER‘s main strength and weakness. Many players will love that it doesn’t tell you anything, forcing you to play and work things out for yourself, which is initially perplexing but ultimately highly rewarding. Others will dislike it for the same reason, being turned off by the fact that the game doesn’t offer any guidance whatsoever. Some things it doesn’t tell you about are quite major components too, such as its scoring system which adds a whole new element to the gameplay for those who like to do a bit of scorechasing. 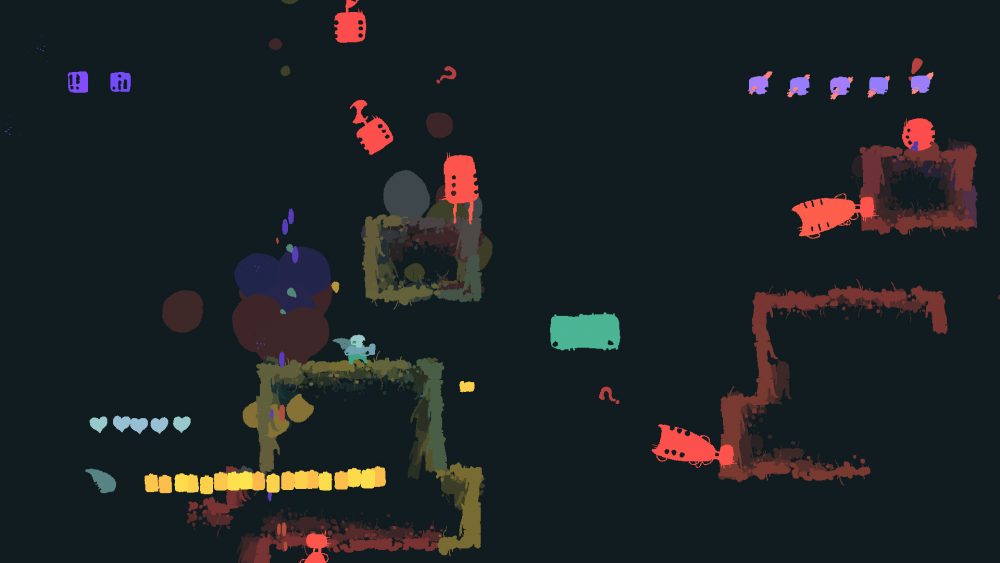 Whenever you begin a new game of GoNNER, initially, you can’t score any points at all. Once you’ve killed enough enemies however, one of them will drop a glyph. Collect the glyph and from that point on you’ll score a point for every enemy you kill. Kill enough enemies and another glyph will drop, which when collected will mean you’ll get two points for every enemy you kill. See where this is going?

It’s this scoring mechanic that will gravitate you towards playing GoNNER on a regular basis, even once you have managed to somehow “complete” it. Its pick up and play gameplay is great for short bursts of challenging action, and it lends itself ideally to the pursuit of ever chasing your high score. There’s even a daily challenge, allowing players to complete one level that’s identical for everyone so that they can truly display their prowess.

Aside from its secrecy, the only other aspect of GoNNER that can be a bit of a turn off is the process of dying.

When you get hit, losing one of your few precious lives in the process, your body becomes separated from your head. Without a head you have a brief window of invulnerability before a replacement miraculously spawns on you, but if you collect your head before then you can continue on your merry way immediately. In the heat of battle, however, it’s often hard to see that you’ve even been hit, let alone where your skull is. This results all too often in you springing back to life to promptly die again because you weren’t even fully aware that you’d died in the first place.

Regardless of this minor grievance, if you’re after a game that’s fun to pick up and play, GoNNER is well worth the asking price. Its unique visuals, great soundtrack and wonderfully responsive controls make it a title you’ll go back to again and again; perfect for a portable device like the Switch. If, however, you have little patience for hard games and those that don’t spoon-feed you information, it’s probably best you steer clear. You’ll probably end up throwing your Switch out of a window otherwise.