Hero in Residence is not a tale of heroism or derring-do and is all the better for it.

That’s not to say that this, the first episode in the second season of Telltale’s Minecraft: Story Mode, totally eschews action. This point-and-click adventure features a significant number of action sequences which are more varied than Telltale’s usual button-mashing fare. And while you don’t have to have played Minecraft to get the most out of Story Mode, fans of Mojang’s original block-building game are suitably catered for by a few brief and untaxing crafting sequences. My introduction to Minecrafting came when a character charged me with making him a garden statue; strangely, he seemed utterly unperturbed that I’d used the provided blocks to spell out “tit” on his front lawn.

But what really makes Hero in Residence stand out, and which left me eagerly anticipating the rest of the season, is the way that it addresses what happens after evil has been defeated and the adventure ends. It would have been so easy for Telltale to place you in the square shoes of another protagonist elsewhere in Minecraft’s blocky world. Yet you’re once again cast as Jessie who, along with his or her allies (their gender is your choice), saved the realm from destruction. She’s now the unofficial mayor of a small town, the friends she travelled with having their own duties, which leaves her feeling very much alone.

It’s a bold step that allows the episode to tackle themes of responsibility, friendship, personal growth and how people sometimes just move on with their lives; in short, issues that can’t be resolved by swinging a sword. Nor do you need to have to have played the previous season to appreciate the situation that Jessie, finds herself in. Every conversation she has with her former friends oozes awkwardness, so much so that you’ll find yourself squirming in your chair in sympathy. So many games, movies and books are content to end the hero’s story when they’re triumphant that it’s a real revelation to have a tale that takes place after the dust’s settled. 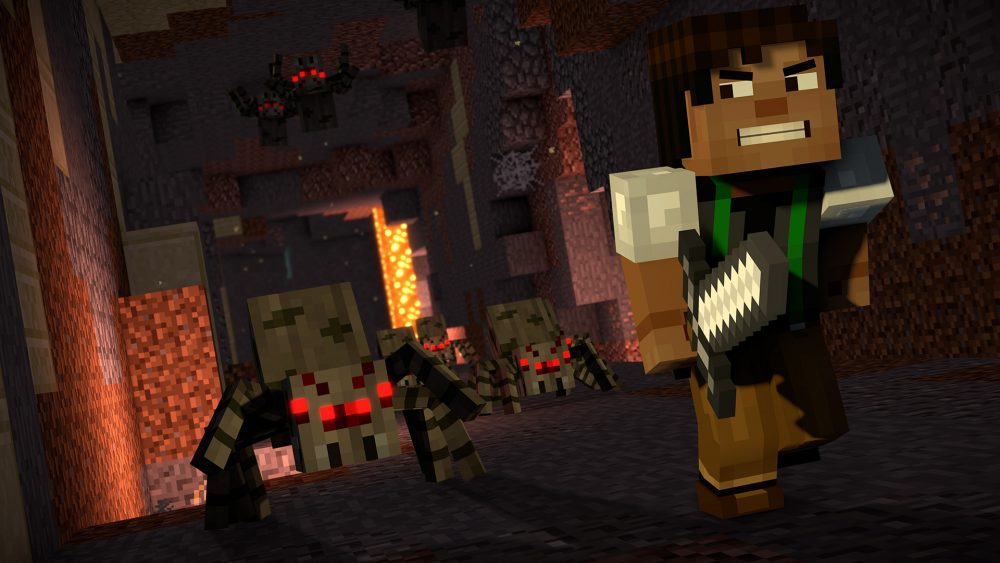 Hero in Residence isn’t wall to wall misery; despite the episode’s underlying themes, it still retains its quirky charm. The polar opposite of The Walking Dead, Telltale’s flagship series, Minecraft: Story Mode is the perfect antidote to cynicism and not merely because of its appealingly blocky graphics. The dialogue choices you’re presented with do make it possible for you to be a hateful wretch but you’re surrounded by such positivity that it’s tough to maintain this stance. Even this episode’s alleged arch-nemesis proves to be so adorable, albeit when she thinks no-one’s looking, that you’ll wish you could reach through the screen and hug her.

In terms of pacing, Hero in Residence is something of a slow burn. Compared to the first episode of the previous season, it’s less apocalyptic in tone and spends a great deal of time underlining Jesse’s growing dissatisfaction with her new situation. When an adventure does finally present itself, her relief is all too evident; you’d have to have a heart of stone not to feel for her. Hero in Residence is also largely self contained, with only a brief encounter with what may or may not turn out to be the season’s “big bad”. Yet none of this diminishes the episode which, even if you’ve not tackled the previous season, will reel you in.

Hero in Residence is a sterling start to Minecraft Story Mode Season 2, an entertaining, engaging outing which shows that that the series is capable of doing more than retreading old ground. If the remaining five episodes can pick up the pace and continue to explore the themes tackled thus far then we’re in for a real treat.

Minecraft Story Mode: Season 2 is available on PC, Xbox One and PS4. We reviewed the PS4 version.